From Golden Age To Expulsion: The Transformations of Sephardic Culture 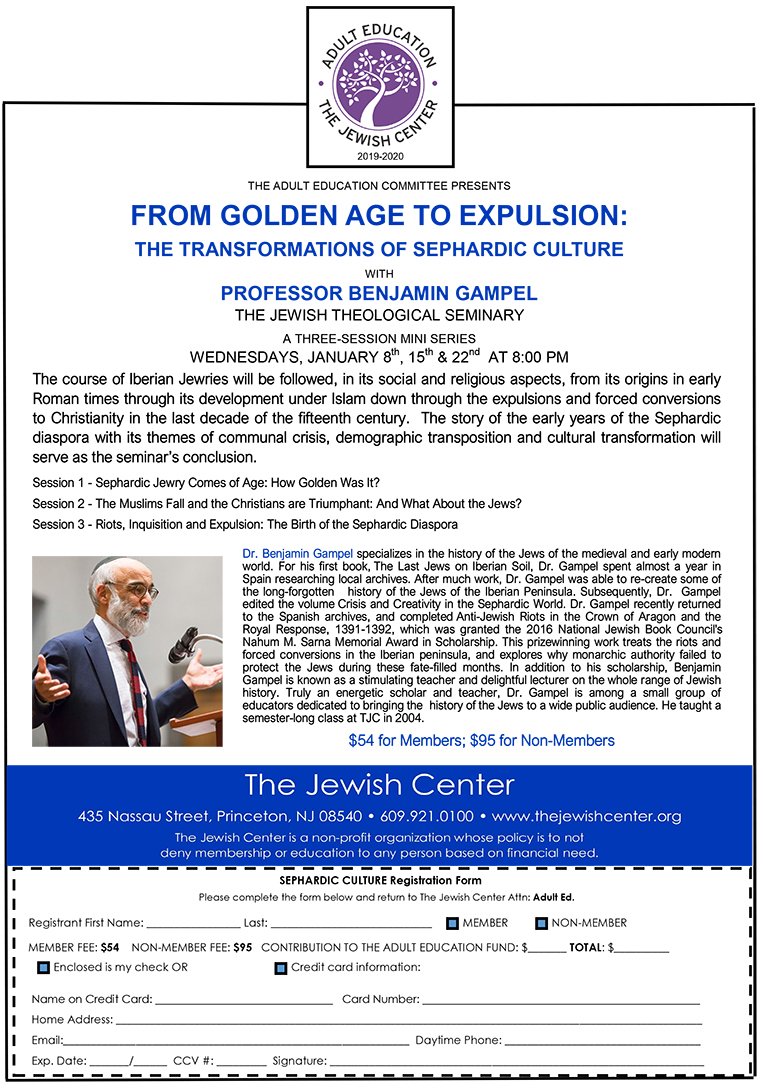 The course of Iberian Jewries will be followed, in its social and religious aspects, from its origins in early Roman times through its development under Islam down through the expulsions and forced conversions to Christianity in the last decade of the fifteenth century. The story of the early years of the Sephardic diaspora with its themes of communal crisis, demographic transposition and cultural transformation will serve as the seminar’s conclusion.

Session 1 – Sephardic Jewry Comes of Age: How Golden Was It?
Session 2 – The Muslims Fall and the Christians are Triumphant: And What About the Jews?
Session 3 – Riots, Inquisition and Expulsion: The Birth of the Sephardic Diaspora

Dr. Benjamin Gampel specializes in the history of the Jews of the medieval and early modern world. For his first book, The Last Jews on Iberian Soil, Dr. Gampel spent almost a year in Spain researching local archives. After much work, Dr. Gampel was able to re-create some of the long-forgotten history of the Jews of the Iberian Peninsula. Subsequently, Dr. Gampel edited the volume Crisis and Creativity in the Sephardic World. Dr. Gampel recently returned to the Spanish archives, and completed Anti-Jewish Riots in the Crown of Aragon and the Royal Response, 1391-1392, which was granted the 2016 National Jewish Book Council’s Nahum M. Sarna Memorial Award in Scholarship. This prizewinning work treats the riots and forced conversions in the Iberian peninsula, and explores why monarchic authority failed to protect the Jews during these fate-filled months. In addition to his scholarship, Benjamin Gampel is known as a stimulating teacher and delightful lecturer on the whole range of Jewish history. Truly an energetic scholar and teacher, Dr. Gampel is among a small group of educators dedicated to bringing the history of the Jews to a wide public audience. He taught a semester-long class at TJC in 2004.

OPEN TO THE COMMUNITY! $54 for Jewish Center members
$95 for community members. For more information please contact info@thejewishcenter.org or call 609-921-0100 x200.