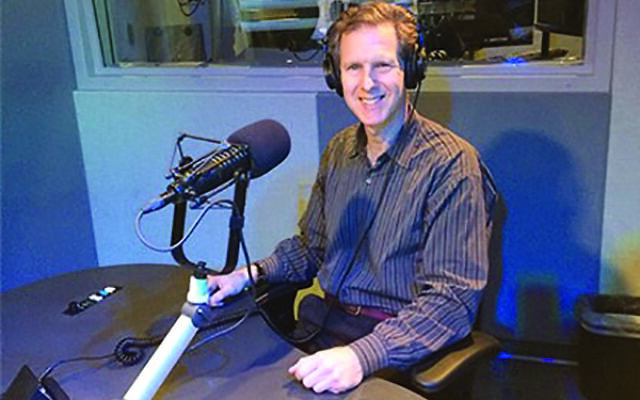 Gary Scheer on the set of his retirement podcast.

Scheer — a past president and treasurer of the Gottesman RTW Academy, the Jewish community day school in Randolph, and a member of two area synagogues, Morristown Jewish Center Beit Yisrael (MJCBY) and Mount Freedom Jewish Center (MFJC) in Randolph — was found to have recommended and sold $12 million worth of unregistered securities to more than 50 clients, a violation of the state’s securities law.

Among those he defrauded were MJCBY members Audrey and Jeffrey Pancis of Morris Plains, who met Scheer when their children attended Gottesman, then called Hebrew Academy of Morris County, together.

“He belongs in jail with Madoff,” said Jeffrey Pancis, 67, in a conversation with NJJN. “He’s a crook.” Bernard Madoff infamously defrauded thousands of clients in the largest Ponzi scheme in history and is now in prison, a dozen years into serving a 150-year sentence.

Pancis pointed to what he considered Scheer’s particularly egregious misdeeds — actions that preyed upon people “within his own community.” Pancis seethed as he recalled that while their children were schoolmates, “I used to take his daughter ice skating. Why wouldn’t I have trusted him? He’s been in the community for over 30 years,” Pancis said.

Scheer is also a past contributor to Jewish Federation of Greater MetroWest NJ’s annual campaign.

Through his lawyer, George Mahr, Scheer disputed all the findings and allegations. Mahr told NJJN an appeal was being filed.

“When all the facts are known, Mr. Scheer and his associates will be completely vindicated,” said Mahr.

The Feb. 25 ruling by the State of New Jersey Board of Securities found that Scheer breached his fiduciary duty to over 50 clients by recommending and selling them unregistered securities. Six of the seven unregistered investments he recommended and sold were determined to be fraudulent; two were Ponzi schemes. The sales generated close to $700,000 in commissions for Scheer.

Pancis, together with several other Scheer victims, filed a separate civil lawsuit in 2018 in Superior Court. In that case, Pancis sought to recoup $550,000, including his initial investment and the interest it should have accrued.

The Feb. 25 ruling also found that Scheer violated securities laws by selling unregistered securities, acting as an unregistered agent, omitting or materially misrepresenting the risks associated with the investments, failing to conduct reasonable due diligence before making investment recommendations, and failing to inform customers of the conflict of interest in the form of the commissions he received for their investments.

“He had a superb presentation,” said Pancis. “And I do mean superb.” But Pancis added that Scheer never revealed that Massachusetts, Texas, Arizona, and Michigan had all initiated actions against the investment Scheer was recommending (Woodbridge Group of Companies LLC, a $1.2 billion Ponzi scheme), nor did Scheer share that he would receive a sizeable commission in return. Woodbridge ultimately declared bankruptcy.

Mahr asserted that Scheer shared the commission information with Pancis and his other clients. He also told NJJN that Scheer was “the low man on the totem pole,” and had no knowledge of what was actually happening, no role in the inner circle of wrongdoing.

“Did he perform due diligence? That’s where reasonable minds will differ,” said Mahr.

Attorney General Gurbir Grewal viewed the case differently. “Investment advisers are expected to serve the interests of their customers with undivided loyalty and not exploit them for financial gain,” said Grewal in a statement. “We will not allow unscrupulous professionals to undermine the integrity of New Jersey’s financial industry by enriching themselves at the financial expense of their customers.”

Scheer was the managing member and sole investment adviser at Retirement Financial Advisors, LLC, in Morristown. He recommended and sold the unregistered securities while working as a representative for several investment advisers over an eight-year period. The underlying investments in the unregistered securities included franchises, pension income streams, real estate development, and mortgages.

“Scheer’s conduct represents an egregious breach of the fiduciary duty he owed to his customers,” said Paul R. Rodríguez, acting director of New Jersey’s Division of Consumer Affairs, in a statement. “His actions resulted in serious financial consequences for investors, who are now left with the devastating impact of trying to recover their investments.”