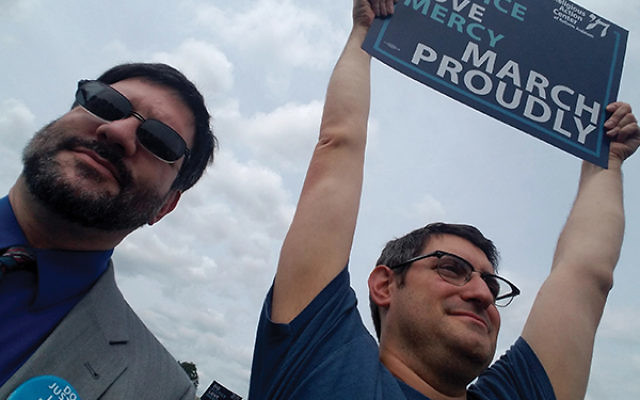 Rabbi Doug Sagal, senior rabbi at the Reform Temple Emanu-El in Westfield, traveled to Washington Aug. 28 to join thousands of clergy and lay leaders in the One Thousand Ministers March for Justice — sponsored by the National Action Network — commemorating the 54th anniversary of the Rev. Martin Luther King Jr.’s “I Have a Dream” speech in the nation’s capital.

Initial plans were in place before the Aug. 12 neo-Nazi and white supremacist rally gave rise to violence in Charlottesville. The March for Justice drew 3,000 clergy and 2,000 lay leaders. Rabbis from various streams of Judaism were a significant presence.

The march was organized by the Rev. Al Sharpton and, in a move that many rabbis interviewed said would have been unimaginable only months before — considering the African-American civil rights leader’s past contentious relationship with the Jewish community — the Religious Action Center of Reform Judaism (RAC) partnered in it.

Sagal said he “has mixed feelings about Al Sharpton,” having lived in New York when tensions between him and the Jewish community were at their peak, and for him personally, “I can never separate him from some of his words and actions.

“But for me it’s not about Al Sharpton or Jesse Jackson, who was also there, but about religious leaders taking a stand,” he said. “I think this showed there are good and decent people in this country who are appalled about what is happening and they are not alone. The religious community is supportive and I don’t think this was about influencing the administration as much as to show support for all those people raising their voices.”

Rabbi Joel Abraham of Temple Sholom in Scotch Plains, who joined rabbis from Middlesex and Monmouth counties on a bus to Washington, said he was disappointed the march did not receive more national publicity in view of its importance commemorating King’s speech. Yet while he didn’t feel the gathering would move political leaders to action, it did allow clergy to fortify alliances.

“I saw marching a lot of clergy I know from across the country,” said Abraham. “I think moments like this are important to let people know who they can turn to. It’s one thing to get together and talk about justice but if you march from Martin Luther King’s statue to the Justice Department it makes a statement that there is not enough justice in this country. There needs to be justice for everyone. It’s not that we needed this march, but it’s a step along the way. It was more about making allies and having people stand together.”

That sentiment was also voiced by other rabbis.

“Despite my knowledge and feelings about the Rev. Al Sharpton and the Rev. Jesse Jackson and their history with the Jewish community, the overall feeling I got was very positive,” said Rabbi Laurence Malinger of Reform Temple Shalom in Aberdeen, who added that both sides admitted to having made mistakes, “and now we have to go forward together.”

Rabbi Marc Kline of Monmouth Reform Temple in Tinton Falls said while he is “not a fan” of Sharpton, “he was the ultimate statesman that day — open, egalitarian — and he apologized.”

Sharpton’s break with the Jewish community goes back to the 1991 race riots in Brooklyn’s Crown Heights, and later in 1995 when the Jewish owner of a Harlem store had his business attacked after Sharpton labeled him “an interloper.” Jackson, in a 1984 conversation with an African-American Washington Post reporter, referred to Jews as “Hymies” and to New York City as “Hymietown.” He later apologized.

While there have been many disagreements with the African-American leaders, said Malinger, “we all agree we don’t want to live in a nation that treats people differently because of the color of their skin or their sexual orientation.”

At the march, Malinger said, “African-American speakers noted that when neo-Nazis said, ‘Jews will not replace us,’ they are speaking about ‘us’ [African Americans] as well, and we have to stand up one for the other.”

Indeed, at a prayer breakfast organized by the RAC prior to the rally, Sharpton spoke of the 1964 murders of freedom riders Andrew Goodman, Michael Schwerner, and James Chaney in the infamous “Mississippi Burning murders,” saying, “We should never forget that it was Goodman, Chaney, and Schwerner who died together — two Jews and a black — to give us the right to vote.”

Malinger and other rabbis said Sharpton also referenced Rabbi Abraham Joshua Heschel, who marched for civil rights with King in Selma, and pledged that he and his community would do their part “to keep this family together.” Sharpton reiterated those themes at the march.

“Charlottesville showed us the need to work together because the hatred of neo-Nazis and the alt-right is directed at all of us,” Malinger said.

Rabbi Philip Bazeley of Anshe Emeth Memorial Temple, a Reform congregation in New Brunswick, said while his synagogue has “many wonderful multiple interfaith relationships in our community,” it will look to grow them further to stand up to hatred.

Much to his delight, he said, Jews were “front and center at the march,” and the overall theme of “we’re all stronger together” resonated with him and the large interfaith gathering.

Rabbi David Vaisberg, religious leader of Reform Temple Emanu-El in Edison and organizer of a bus to the march, strongly chastised President Donald Trump and other political leaders for allowing the hate-filled atmosphere to fester in the country.

“I organized the bus because we’re at a tipping point with such immorality coming from our leadership that the nation has gone backward in how we treat human beings,” said Vaisberg. “It’s not even that Martin Luther King’s work needs more doing; it’s that his work is being undone by the current administration.”

Vaisberg said Trump and his supporters “have given the KKK and neo-Nazis a new name — the alt-right — and empowered them to speak up. They almost have permission to say what they think is right and good. There is a limit to free speech in our nation, and when things can be said that are hateful and hurtful to others, we have gone into the Stone Age.

“Since the administration of this country has abdicated its responsibility,” Vaisberg continued, “it has almost exclusively fallen on the clergy to show up and speak up.”

Kline has a long history of fighting for the rights of others, including his time as a lawyer in Arkansas, where he took on civil rights cases on behalf of the ACLU. Later, at his pulpit in Florence, S.C., he was one of seven organizers of a march in 2000 that drew 50,000 protestors opposing the flying of the Confederate flag over the Statehouse. Their actions pushed officials to move the flag to a monument; it has since been removed in the wake of Charlottesville.

Kline said on Saturday, the day after the events in Charlottesville, what almost amounted to a “flash mob” rally took place in Red Bank, which he attended.

“I can’t think of a better Shabbat activity than standing together with my brothers and sisters to say what is right about America,” he said. “I’m 100 percent convinced that the politicians are not moved by these marches, but I’m also 100 percent convinced the people who participate in them are. People come back inspired to volunteer in their communities and get involved in the political process.

“They speak to people they never would have spoken to before and come to realize we are all children of the very same God,” said Kline.

“We are blessed to live in a country that affords us the right to work with people as the spirit moves us to build bridges. We fulfill every dream of the constitutional framers and our own mission as Jews when we do so.”