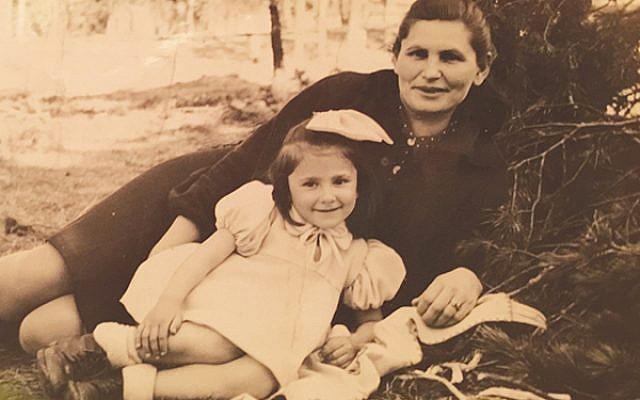 Lola Kline of Freehold with her mother, Taibe Dzienciolski, in a displaced persons camp after the war. Photo Courtesy Lola Kline

There’s a common misconception that Jews “went like sheep to the slaughter” during the Holocaust, but resistance was, in fact, pervasive. Resistance took many forms, including spiritual, armed, and making a conscious decision to survive the torture and abuse of the concentration camps.

“Very little is understood by the American public about Holocaust resistance,” said Jack Needle, a retired history professor at Brookdale Community College in Lincroft, and a member of Congregation B’nai Israel in Rumson. Needle will be a featured speaker in a three-part “Holocaust Resistance” series, Jan. 6, 13, and 20, at B’nai Israel to dispel what he called a “terrible myth” about the passivity of Shoah victims.

“The research done about the camps has shown that inmates, particularly Jewish inmates who were not immediately gassed, were only supposed to survive 90 days with the terrible diet and poor sanitary conditions,” he said. “The greatest amount of suicides occurred in the first two weeks because of the dehumanizing conditions … Those kinds of conditions lead to a loss of dignity and self-respect. If you survive that, that’s resistance. If you are a survivor, you are a resister.”

The myth of “sheep to the slaughter” was perpetuated by those who lived in Palestine, according to Needle. They perceived survivors as being weak and referred to them as “soap,” a reference to rumors that Nazis used the fat of murdered Jews to make soap.

Needle said a recent Pew Research Center survey found that the American population knows less about the Holocaust than they did 10 years ago. He said he hopes the program would help stem that trend.

Jane Denny, adjunct professor at Stockton University and former director of education at Brookdale’s Center for Holocaust, Human Rights & Genocide Education (Chhange), said survivors who chronicled the tragedy of the Shoah were resisting Nazi efforts to cover up its brutality. In particular, she cited the Oneg Shabbat Group, a collective of historians, writers, and teachers who detailed more than three years of life in the Warsaw Ghetto. They hid their documentation, some of which was later found and became an important source about the Nazi occupation of Poland.

“They became the historians and curators so the story could be told in the future,” said Denny, who noted that former Yad Vashem director Yitzhak Mais documented more than 90 armed resistance groups that operated throughout Europe during the Holocaust.

Some examples of prisoner resistance include holding Shabbat services or recording experiences in words or illustrations. “In camps, having a pencil may have meant your death,” Needle said.

The Jan. 6 lecture will be moderated by Needle and Denny, and feature Lola Kline, niece of the famed Bielski brothers who saved more than 1,200 Jews in the forest of what is now Belarus and became the subject of the movie, “Defiance.” Kline’s mother, Taibe Dzienciolski, was a sister of the three brothers, Tuvia, Zus, and Asael, who waged guerilla warfare against the Nazis and collaborated with the Russian partisans.

Kline, a Freehold resident, was born in 1941 before the Nazis invaded Nowogrodek, which was in Poland at that time. When she was 6 months old her parents escaped to the forest to join the family partisans, bringing their infant daughter with them. Three months later they gave her to a Polish couple and she lived as a hidden child. Kline said the couple treated her well, showered her with affection, and provided for her needs.

“I remember them feeding me, going to church with them on Sundays,” she said. “I thought I was Catholic and was baptized. I learned to hate Jews, but that wasn’t because of them. That was for their protection and for my protection. They knew the Germans were out to kill all Jews.”

She lived with them until she was almost 4, when her parents kidnapped her after the couple refused to relinquish her.

“They thought my parents would be killed,” Kline told NJJN. “They didn’t expect my parents to show up after the war. It was very traumatic for me, my parents, and certainly for the couple.”

Her parents, with young Kline in tow, ended up in a displaced persons camp in Fohrewald, Germany, before moving to Brooklyn.

The second and third sessions of the series will focus on different types of resistance, highlighting the Warsaw Ghetto uprising and the Auschwitz Sonderkommando Rebellion of 1944.

What: Three-part series on Holocaust resistance