Exploring From Gottschalk to Gershwin, A Musical Program at TBA 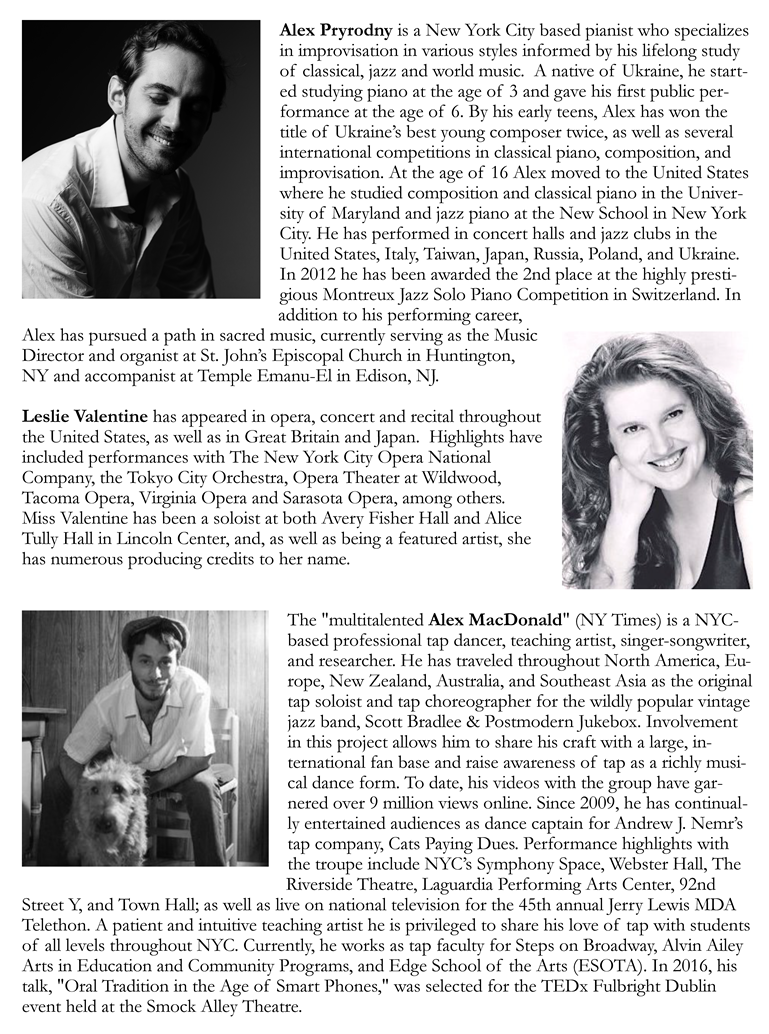 Join Temple B’nai Abraham’s Prime Time for a musical afternoon program, “ From Gottschalk to Gershwin,” on Sunday, March 15, at 2:30 PM, at the temple located at 300 East Northfield Road, Livingston. Trace the important role played by Jewish composers—from Gottschalk in 1842 to Gershwin in the 1920s and 30s—in the history of American music. In an engaging, humorous and thought-provoking concert, pianist Alex Pryrodny, mezzo-soprano Leslie Valentine and tap dancer Alexander MacDonald explore some of the turning points and key contributors, from early fusion attempts until the dawn of the “Jazz Age.” They connect history to the present day to answer the question, “What is American music and what makes it unique, valuable and truly American.”

Light refreshments will be served. The community is invited to attend. Admission fee is $15 per person if RSVP by March 10 ( at the door $20).

Alex Pryrodny is a New York City based pianist who specializes in improvisation in various styles informed by his lifelong study of classical, jazz and world music. A native of Ukraine, he started studying piano at the age of 3 and gave his first public performance at the age of 6. By his early teens, Alex has won the title of Ukraine’s best young composer twice, as well as several international competitions in classical piano, composition, and improvisation. In 2012 he has been awarded the 2nd place at the highly prestigious Montreux Jazz Solo Piano Competition in Switzerland. In addition to his performing career, Alex has pursued a path in sacred music, currently serving as the Music Director and organist at St. John’s Episcopal Church in Huntington, NY and accompanist at Temple Emanu-El in Edison, NJ.

Leslie Valentine has appeared in opera, concert and recital throughout the United States, as well as in Great Britain and Japan. Highlights have included performances with The New York City Opera National Company, the Tokyo City Orchestra, Opera Theater at Wildwood, Tacoma Opera, Virginia Opera and Sarasota Opera, among others. Miss Valentine has been a soloist at both Avery Fisher Hall and Alice Tully Hall in Lincoln Center, and, as well as being a featured artist, she has numerous producing credits to her name.

The “multitalented Alex MacDonald” (NY Times) is a NYC-based professional tap dancer, teaching artist, singer-songwriter, and researcher. He has traveled throughout North America, Europe, New Zealand, Australia, and Southeast Asia as the original tap soloist and tap choreographer for the wildly popular vintage jazz band, Scott Bradlee & Postmodern Jukebox. Since 2009, he has continually entertained audiences as dance captain for Andrew J. Nemr’s tap company, Cats Paying Dues. A patient and intuitive teaching artist he is privileged to share his love of tap with students of all levels throughout NYC. Currently, he works as tap faculty for Steps on Broadway, Alvin Ailey Arts in Education and Community Programs, and Edge School of the Arts (ESOTA).

Register online at tbanj.org/rsvp-prime-time-from-gottschalk-gershwin
or call the temple office at 973.994.2290. For more information go to tbanj.org/prime-time-concert-from-gottshalk-to-gershwin.