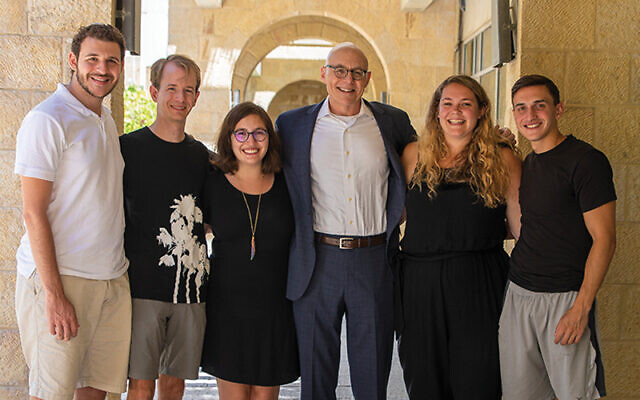 Andrew Rehfeld, with students at HUC’s campus in Israel, is bracing for a year of distance learning or “an on-again, off-again year if the quarantine comes back.” Photo courtesy Huc.edu

Andrew Rehfeld has an impressive history of adjusting to new challenges.

A professor of political science at Washington University in St. Louis for almost 20 years, he switched careers and served as professional head of the St. Louis Jewish Federation from 2012 until last year, when he became the president of Hebrew Union College-Jewish Institute of Religion (HUC-JIR). He is the first layman to lead the movement’s flagship center of higher education, training rabbis, cantors, educators, and communal workers in the U.S. and Israel.

It would seem that nothing could have prepared Rehfeld, 54, for dealing with the impact of the coronavirus in his first year on the job. He has been forced to cancel in-person classes at the seminary’s four campuses — New York, Cincinnati, Los Angeles, and Jerusalem — and prepare for the human, educational, and economic fallout of the pandemic well into the future.

“We’re assessing the impact for each of our students and campuses,” Rehfeld explained calmly during a recent Zoom interview from his home in Manhattan.

He created a crisis management team of 32 on March 2, with heavy faculty involvement and student input “to help get through Passover.” Now a task force has been formed to prepare for the next academic year and the worst-case scenario of a year of distance learning, if necessary.

“We also need to be prepared for “an on-again, off-again year if the quarantine comes back.” The task force is now learning management systems and training teachers to be effective in their online classes.

Unlike the previous nine presidents of HUC-JIR, who go back to 1875, Rehfeld is not a rabbi. He says it took three weeks for the HUC-JIR’s presidential search committee to convince him to take the position.

“I was excited, humbled, and amazed at the opportunity,” he recalled, “but I didn’t see the plausibility of a non-rabbi in this position.”

Gradually, he came around.

Joy Greenberg, who chaired the 23-member presidential search committee, described Rehfeld as “uniquely qualified intellectually, spiritually, and professionally” to lead the institution in its “mission to transform the Jewish community and the broader world.”

Rehfeld lived in Ventnor as a young child. He returned to the state in the late ’80s and early ’90s, working as the regional director of NFTYGER, what was then known as the NJ region of NFTY, the official youth movement of Reform Judaism. When his appointment was announced last year, he said he hoped to combine “a return to an academic footing, but in a position of leadership, management, fundraising, strategic planning, and public messaging.”

Now, as all those skills are being employed, Rehfeld notes that disruption can also result in “great innovation.”

The impact of the coronavirus crisis has underscored some of the themes he emphasized in his inaugural address at his installation as president last fall. It was during that moving speech that he acknowledged the poignancy of his succeeding Rabbi Aaron Panken, who was killed when the small plane he was piloting crashed seven months earlier.

“I take on a presidency that no one wished needed to be filled, under circumstances we pray we may never face again,” Rehfeld said, praising Panken as “a gifted and beloved teacher.”

Setting forth his own views, Rehfeld asserted that the Reform movement faces “a crisis of identity and authenticity.” By that, as he explained in his inaugural address, he meant Reform Jews too often define themselves by the things they don’t do, or only by their commitment to inclusion and social justice.

He called for inspiring more people “to live committed, engaged lives as religiously, progressive Jews,” and strengthening “the ideological foundations of the Reform Jewish public sphere” that he worried “are not felt strongly enough in the pews to sustain us in the 21st century.”

One of those foundations, he said, is “the primacy of reason … understanding the world, including religious life, through reason, evidence, and science.” He believes that “reason and rationality must be the primary way to understand our world and God’s place in it.”

Over the course of several interviews, Rehfeld observed that “a greater expectation and respect for science” was one of the lessons learned from the current pandemic. He also noted the need for a restructuring of America’s safety net, based on a policy of public welfare and caring for others.

In his first months in his new post, Rehfeld fulfilled his pledge to spend a month residing at each of HUC-JIR’s four campuses, assessing the culture of each — seeing what practices could be shared — and getting to know faculty and students.

Bruce Phillips, a professor of sociology at HUC-JIR’s Los Angeles campus, was impressed with how Rehfeld “asked different kinds of questions from a management perspective. He was looking at what resources make our campus unique and which ones can be shared with the other campuses. He’s a systems thinker.”

For example, though the seminary’s first-year-in-Israel program was created more than five decades ago to help immerse students in the Hebrew language, Phillips said Rehfeld came to realize that “Israel is an important place where Reform Judaism will grow, and he said we should make nurturing Reform Judaism there core to our mission.”

Sarah Berman, who is in her fifth year in the rabbinic program at the New York campus, has been deeply impressed by Rehfeld’s personal warmth — she was one of several people interviewed who mentioned his gift for remembering people’s names — and his ability to inspire by sharing his vision.

Rehfeld spoke at a retreat Berman chaired last summer, and she said “it was instructive to hear him in an open and honest way talk about” who and what has influenced him in his path. “He thinks differently from any other administrative leader,” she said, “in using the past to approach the future. And he was able to make people feel seen and heard in a really special way.”

During the retreat, Rehfeld was asked some “hard questions” by students, Berman recalled, like why he feels qualified as a layman to lead HUC-JIR. “Without being defensive, he talked about where he saw his strengths and limitations.”

As he did in our interviews, Rehfeld has noted in his talks that he has been deeply involved in the Reform movement since his childhood in Baltimore. He taught Hebrew school, was a member of a temple youth group, served as a youth director in the movement’s camps, and later served on the board of the congregation he belonged to in Chicago. It all began, he said, with his first temple youth group retreat at Baltimore Hebrew Congregation in 1981, from which he came away “inspired by a caring community of peers who took … ideas seriously, engaged in meaningful ritual and song, and created the space to welcome an outsider among them.” He said it was the first time he felt “at home in my own tradition.”

In seeking to promote “the ideas and the leadership that strengthen the Jewish Public Sphere — the institutions that form the canvas of Jewish communal life,” Rehfeld says that HUC-JIR must be flexible in “responding to the needs of the consumer without wavering in our mission.” That mission, he believes, is “to drive our ideas and help build a foundation of goodness, holiness, righteousness, and justice for all who inhabit the earth.”

Gary Rosenblatt is editor at large for The New York Jewish Week, NJJN’s sister publication. He can be reached at Gary@jewishweek.org.