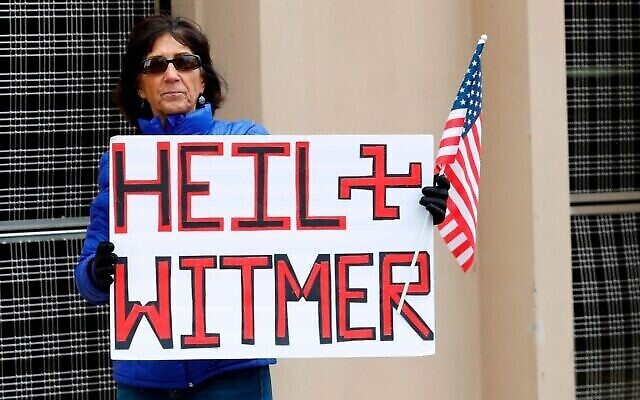 A sign comparing Michigan Gov. Gretchen Whitmer to Adolf Hitler during a protest in Lansing of her extension of stay-at-home orders to fight the coronavirus crisis, April 15, 2020. (Jeff Kowalsky/AFP via Getty Images)

The “open-up” protesters seen holding signs comparing government-issued stay-at-home orders to Nazi directives seem to care as little about historical accuracy as they do about the well-being of their fellow citizens. Nazism was a cult of death; the political leaders who are listening to the best advice of scientists and, yes, economists are out to slow the spread of a dangerous contagion, save lives, and make the economy itself healthier in the long term.

Jewish institutions are for the most part resisting the urge to rush back to business as usual, as was evidenced in the painful but necessary decision by the Union for Reform Judaism to close all of its summer camps, a bellwether of closures to come. As URJ said in its announcement, “the risks posed by Covid-19 threaten our most sacred values: the health and well-being of our children, staff, and faculty that attend camp, along with their communities back home.”

Responsible leaders aren’t asking for a complete shutdown of Jewish life until we can safely venture from our homes; rather, they are taking what Reconstructing Judaism movement leaders, in a model statement, describe and prescribe as “actions dictated by our values and [that] are in concert with the best scientific and medical advice available…. Decisions must be local and contextual, based on local circumstances such as infection rates, testing availability, health-care capacity, population make-up, availability of PPE, etc.” The Reconstructing Judaism statement also warns that openings of synagogues, JCCs, camps, schools, institutions and organizations “will happen in stages and may also be sporadic and inconsistent.”

Like the URJ’s statement, the Reconstructing Judaism statement asks leaders of its affiliated institutions to take into consideration “our deeply held values of pikuach nefesh (saving lives); caring for the elderly, infirm, and at-risk; and focusing on community wellness over individual comfort.” Note how that contrasts with the words of Texas Lt. Gov. Dan Patrick, a supporter of the “re-open” movement, who said, “There are more important things than living, and that’s saving this country for my children and grandchildren and saving this country for all of us.” A country that treats its GDP as a sacred value and doesn’t do all it can to protect the most vulnerable — which includes the elderly, first responders, health-care workers and, evidence shows, people of color — is hardly a country worth saving.

Patrick and others are presenting their fellow Americans with a false choice between saving lives and reviving the economy. As the vast majority of economists told researchers from the University of Chicago Booth School of Business, abandoning the drastic lockdowns too soon would lead to “greater total economic damage” down the road. This doesn’t mean ignoring the deep pain caused by the devastating losses of jobs, savings, and revenue. Everyone wants business, schools, and entertainment venues to open as soon as possible; thankfully, the majority of Americans agree that this has to go hand-in-hand with adequate testing, contact tracing, proper sanitation, and social distancing. They support a massive program of emergency aid to those who need it, understanding such assistance is an investment, not a handout.

That’s what we and our leaders need to focus on. It doesn’t make you “soft” or unpatriotic to choose life.