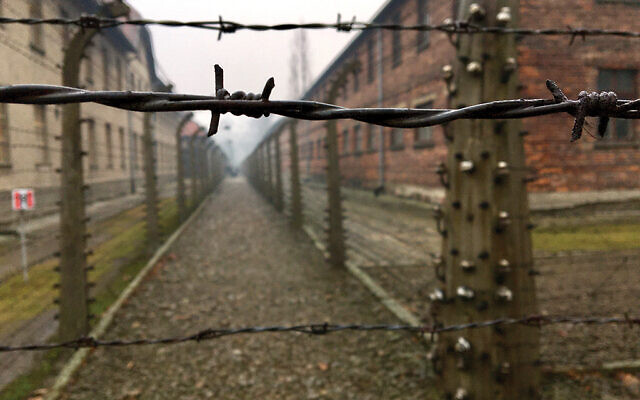 That sounds both obvious and an understatement. The Holocaust is an overwhelming fact of any Jew’s life. It shapes how we think about our Jewish past, present, and future. It informs our politics. It’s the frequent backdrop to our relationship with Israel. And it is a religious challenge, perhaps beyond all others.

But on my first-ever visit to Auschwitz-Birkenau, I finally understood how physically overwhelming the site is. On Tuesday, Jan. 28, I joined a delegation from the World Jewish Congress in Poland for ceremonies marking the 75th anniversary of the liberation of the death camp by Soviet troops. Under a pale sun that barely cut the gloom, we followed the crowds through Auschwitz I, the brick barracks that have largely been converted for displays of shorn hair, eyeglasses, shoes and, maybe most haunting of all, confiscated prosthetics and crutches.

Later we trudged — often through thick Polish mud — around the perimeter of Birkenau, the vast industrial killing complex where about 90 percent of the camp’s victims died — about a million people. Rows upon rows of barracks, all but a few reduced to their foundations. Miles of concrete fence posts and barbed wire. A factory city whose product was death. Multiply this by the other familiar death camps — Belzec, Sobibór, Treblinka — and the thousands of sub-camps and improvised killing fields, and you get only a terrible hint of the obscene logistical effort that went into wiping out a people.

And it is not just the vast scale that changes your understanding of the tragedy. There are small spaces too. The foundation of a gas chamber and its attached crematorium, barely bigger than a two-family home. The cubby-like wooden pallets where prisoners, always two and sometimes many more, slept head to toe. One of our guides was Menachem Rosensaft, WJC’s general counsel, whose parents both survived the camp. He led us into the notorious Block 11 in Auschwitz I, and showed us the closet-sized cells in its basement; in one of them, his father and four others spent five terrifying days after he was accused of plotting an escape. Why he wasn’t executed is another small detail of Auschwitz, but one that saved the Rosensafts’ world.

If you’ve made the pilgrimage, you know what I am talking about. If you haven’t, you might think I am sounding naive, having come to some sort of overdue epiphany about the Holocaust that shouldn’t have escaped me as a Jewish adult. I almost agree. I’ve read the literature, studied the history, met survivors. I’ve been to the museums. But standing at what Rosensaft called the “hallowed ground” of Auschwitz imparts perspective all its own.

What to do with this understanding is the next question. I arrived in Krakow the preceding Friday to cover the events surrounding the anniversary of the liberation. I heard the testimony of survivors and speeches by the machers, and the “lessons” they draw from the Shoah are as individual as they are. Ronald S. Lauder, president of the WJC and chairman of the Auschwitz-Birkenau Memorial Foundation, told me that Auschwitz must stand as a permanent reminder of what was done to the Jewish people and how anti-Semitism can never be allowed to roar back, not on the right or left. At a dinner that night for survivors and their families, he added that the Holocaust taught the Jews “not to count on anyone else except us.” At Tuesday’s main ceremony at the camp, he reiterated, “If for no other reason than the fact that not a single country on earth would take in Jewish refugees when they begged for their lives, that is why the Jewish people need Israel.”

Some survivors at the ceremony had a more universal message. Marian Turski, 93, said, “Don’t be indifferent” — not to historical lies, nor “when any minority is discriminated against.” Elza Baker, persecuted as a Roma, hoped “that everyone would stand up for democracy and human rights.”

Many of the children and grandchildren of survivors, meanwhile, focused on the tenacity of their parents and the lives they built after the horrors. “Hitler did not win,” said Debbie Bornstein Holinstat of North Caldwell, whose father Michael Bornstein was 4 when he was liberated at Auschwitz. “Hatred did not win.”

All these statements can be true, and are. The Holocaust is as vast as the numbers of people who experienced it, of their descendants, and of those who learn about it, from any distance. At times I embrace each of these messages and interpretations.

And yet. I walked almost five miles during my brief tour of Auschwitz. I read the unfathomable numbers: crematoria that could burn 8,000 corpses a day; 232,000 children sent to Auschwitz; 110,000 shoes kept forever behind a glass wall. But the scale of the losses is infinite when you factor in the unknown generations that were cut off with each death. Add to that the unspeakable example that the Nazis provided to the despots and terrorists who still feel inspired by them, and I find it hard to see beyond the darkness.

But I tried. At the visitors’ entrance to Auschwitz I is an installation by architect Daniel Libeskind that features testimonies and photographs of survivors. There’s a portrait of Sara Kestenbaum of Florida, who was 13 when she arrived at Auschwitz. Added to her 2017 testimony is this biographical coda: “89 years old, 3 children, 9 grandchildren, 13 great-grandchildren.” Those are numbers that give me something that looks like hope.

Andrew Silow-Carroll is editor in chief of The New York Jewish Week, NJJN’s sister publication. He served as NJJN editor for 13 years.