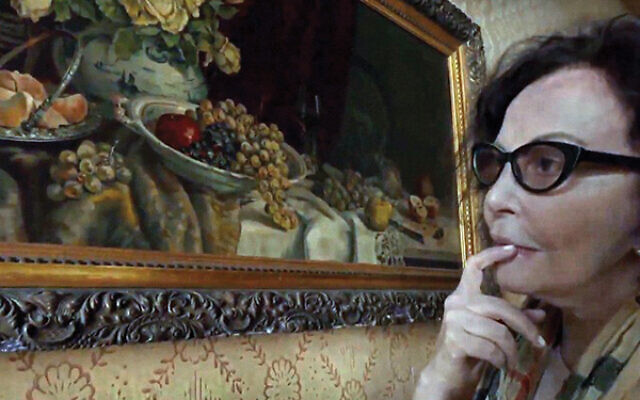 Lilka Elbaum with the painting “Still Life,” which was returned to its place on the wall in her family’s former apartment in Lodz. Photo courtesy Slawomir Grunberg

Still Life in Lodz” is a new documentary about the Polish city’s once-thriving Jewish-owned textile business and the interconnectedness of three families framed around a painting, titled “Still Life,” which hung in a Lodz apartment for 80 years.

One of the families featured in the 75-minute film, directed by Slawomir Grunberg and released by his company, LOGTV, is that of Paul Celler, owner of the development firm Pam Associates based in Manchester. He is a former member of Congregation Etz Chaim in Livingston and lives in Manhattan.

“Just to see Lodz, and the actual place my mother lived, was life-changing,” said Celler. “I had never thought of going to Poland again [he had been there once previously] before we started this project.”

The other families’ descendants featured in the film are Lilka Elbaum of Boston and Roni Ben-Ari of Neta’im, Israel. Elbaum was one of the screenplay’s writers and she narrates the film.

“Still Life in Lodz” debuted in Lodz in November and now comes to the U.S. for a special screening in Livingston on Monday, Jan. 6.

Elbaum called the project “a legacy” for Celler’s children and grandchildren. “It took three years for us to make this documentary and it’s only right to have its first United States showing in Livingston,” said Elbaum about the Essex County town with many second-generation Holocaust survivors who also financially backed the film.

Elbaum, who works at Boston University’s (BU) Elie Wiesel Center for Jewish Studies, has been researching Polish Jewry and the Holocaust for many years. She conceived the idea for the film and discussed it with her friend Bonnie Anfang, a Livingston resident.

Anfang, in turn, brought Elbaum’s proposal to Celler, who immediately came on board and, with Elbaum, enlisted local BU graduates and second-generation Holocaust survivors to back the project. The film also received a grant from the City of Lodz’s film commission.

“I had collaborated with Lilka through Boston University on some other projects,” said Anfang, whose parents were from Warsaw, survived the Holocaust and came to the United States. “When I mentioned the movie, Paul was quick to say he was in. He wanted to know about his family’s history in Lodz.”

Celler, 64, had heard stories of the Holocaust from his mother and father, but neither had elaborated much on the details.

Through the background research that went into the making of the film he was able to confirm that his mother, Rosa Posalska, who was born in Lask, toiled in a sewing shop in the Lodz Ghetto for two years before being sent to Auschwitz on the last transport in August 1944, while his father, David Celler, born in Kielce, was in forced-labor brigades before surviving Auschwitz-Birkenau before the end of the war. The two met in 1945 in a displaced persons camp in Munich, married in 1946, and came to the United States one year later. David established a successful masonry business in New Jersey.

“The second Bonnie introduced me to Lilka, who explained the project to me, I was in,” said Celler. “It has all been both educational and satisfying for me, my wife Tita, my children, and my grandchildren.”

“Still Life in Lodz” centers around a painting that hung in a Lodz apartment from 1888 to 1968. The painting features a bowl of grapes with an apple, some orange slices, a vase of roses, and in the distance a knife and sliced fruit. Elbaum’s family lived in that apartment from 1945 to 1968. She was born there after World War II and recalled in the film seeing the painting when she woke in the morning and went to sleep at night.

“The painting saw a lot of Jewish triumph and tragedy,” Elbaum told NJJN in a phone interview. She said Lodz once had more than 200,000 Jews and now “maybe 20 or so” Jews are left.

Elbaum’s parents, Maria (Koper) and Benjamin Rozenbaum, survived the Holocaust. They were hidden by Polish citizens, and Maria’s rescuers are interviewed in the film.

The Rozenbaums came to Lodz in 1945, moved into the apartment, and bought all of its contents, including the painting.

“I became very attached to the painting and what I thought the objects in it … meant,” said Elbaum.

The painting had been owned by the family of a Jewish woman dentist who lived in the apartment and perished in the Holocaust. A Nazi official lived there for five years. After World War II, he fled, and the painting was then purchased by the Rozenbaums.

Life was good for the family until 1968, when a government-sanctioned campaign harassed Jews and forced them out of jobs. Almost all of the Polish-Jewish population fled at that time and their citizenship was revoked.

The Rozenbaums moved to Montreal, where Lilka met and married Stanley Elbaum, and her parents ran a grocery store.

“We couldn’t take the painting when we fled,” said Elbaum, who later moved to Boston and acquired U.S. citizenship.

Elbaum traced ownership of the painting to a country home in a suburb of Lodz. The owners allowed it to be returned to Elbaum’s childhood apartment, now empty, for the filming, even uncovering the nail from which the painting hung more than 50 years ago.

In Lodz, Ben-Ari’s family manufactured and sold textiles in a shop on the ground floor of the apartment house where the Rozenbaums lived. Ben-Ari is a photographer and former Israeli news correspondent.

“I wrote a history of our family’s business in 2012 and I still have a loom my father used and my grandfather’s menorah,” said Ben-Ari. “It all began in Lodz.”