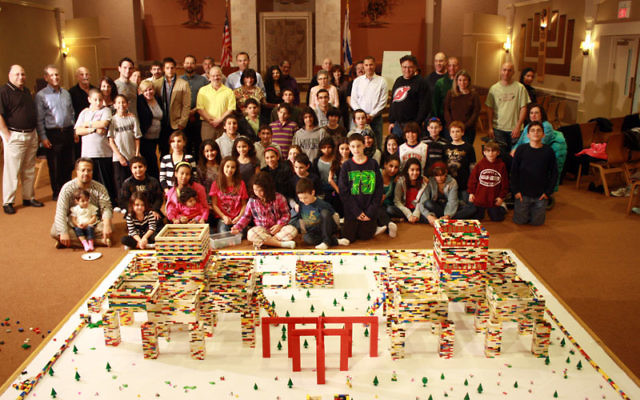 “Builders of peace” from the Islamic Society and Temple Rodeph Torah admire their creation.

Rabbi Shira Stern posed a challenging question to religious school students at Temple Rodeph Torah of Western Monmouth County: If you were to build peace, what would it look like?

On April 16, those students joined others in providing a multi-faith answer. At a Shabbaton at the Reform temple in Marlboro, a colorful vision of peace was created by nearly 100 people: TRT students in grades three-seven, their parents, and nearly 50 students and adults from Masjid Al-Amaan — The Islamic Society of Monmouth County in Middletown.

In under two hours, the group built a 12-foot-by-nine-foot model of a temple out of 60,000 LEGO blocks. The design, said Stern, TRT’s primary school educator, represented the builders’ vision of a temple that could serve both Muslims and Jews and become a model for collaboration and understanding,

The project was directed by architect Stephen W. Schwartz, AIA, of SWS Architects in Livingston, who conducts about 50 Building Blocks Workshops each year. Most of his hands-on educational projects depict sites of Jewish heritage, including models of Jerusalem, Masada, and the Warsaw Ghetto, and the world’s tallest LEGO menora.

“This is the first time someone asked me to help construct a temple for Jews and Muslims,” said Schwartz. “I’m used to having exuberant participants, but this project went well above my wildest expectations.”

The LEGO structure was built on columns, symbolizing that “we all live on this earth together,” Schwartz said. From the common meeting area, called the Courtyard of Abraham — the patriarch of origin revered by both religions — two sets of stairs led up to two sanctuaries, one Muslim, one Jewish, situated side by side.

“Just like you go up to the Torah for an aliya,” said Stern, describing the model, “the structure was designed so you go up to the worship area. Even though we worship separately, we have a common ground in the courtyard, as well as classrooms where we learn from each other.”

Talking about the aim of the project, Stern said, “We are trying to create bonds of friendships. We are not trying to make Jews and Muslims the same. We need to treasure and honor our own unique culture, yet at the same time recognize what we have in common and find ways to live in peaceful coexistence.”

The best time to do that is when children are young, she added. “I was listening to all the rhetoric about the Ground Zero mosque and thought this was a great opportunity for students to learn important lessons that are not influenced by partisan politics and the animosities adults often harbor,” she said.

“We built the model so that which holds us together is Abraham. Two people coming from a common bond have a connection. We have different ways to honor and serve God, but we are nonetheless connected in our history.”

At the Shabbaton, members of the mosque taught about the Five Pillars of Islam: unity of God, prayer, charity, fasting, and pilgrimage. These five points were represented in the columns in front of the model building and in the five rooms that comprised the Muslim praying area.

Stern, together with her husband, Rabbi Donald Weber, who is TRT’s religious leader, taught six points of Judaism represented through the six rooms in the temple. They structured the points into two sets of three, forming a visual star of David as inverted triangles: God, Torah, and Israel and study, worship, and deeds of lovingkindness. The study session was followed by a Middle Eastern supper.

“It was an amazing experience for the new generation and was successful beyond our expectations,” said Ibrahim Naboulsi of Marlboro, public relations coordinator of the Islamic Society of Monmouth County. “Between 9/11 and what’s happening in the Middle East, it was a very positive approach to teach our kids to differentiate between politics and religion. We all come from the same source. We just worship in different ways.”

For 11-year-old Matthew Beck of Morganville, a fifth-grader at TRT, the Shabbaton was unlike anything he has ever experienced. “I was really, really surprised how it turned out. It is very interesting how similar our religions are, and how much fun we could have building with LEGOs,” he said.

“It taught unity not just to the kids, but to the adults too,” said Matthew’s father, David. “We found so many similarities between us, and it was really nice to see it.”