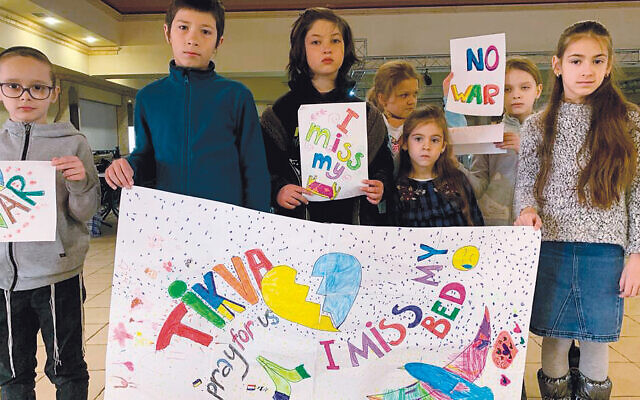 These children are in Romania; they’ll be settled there indefinitely, Tikva says. (All photos courtesy Tikva)

It would have been enough….

If Tikva – which has housed and educated thousands of abandoned, abused, and orphaned Jewish children in Odessa since 1994 – had simply been able to continue its valuable work….

If, in the midst of war, the organization had managed to save some of its children but leave behind its staff to face the invading Russian forces….

If the Odessa children’s home rescued the children and staff but left behind elderly local residents who used the center to socialize….

But it wasn’t enough, and Tikva was not prepared to leave anyone behind. 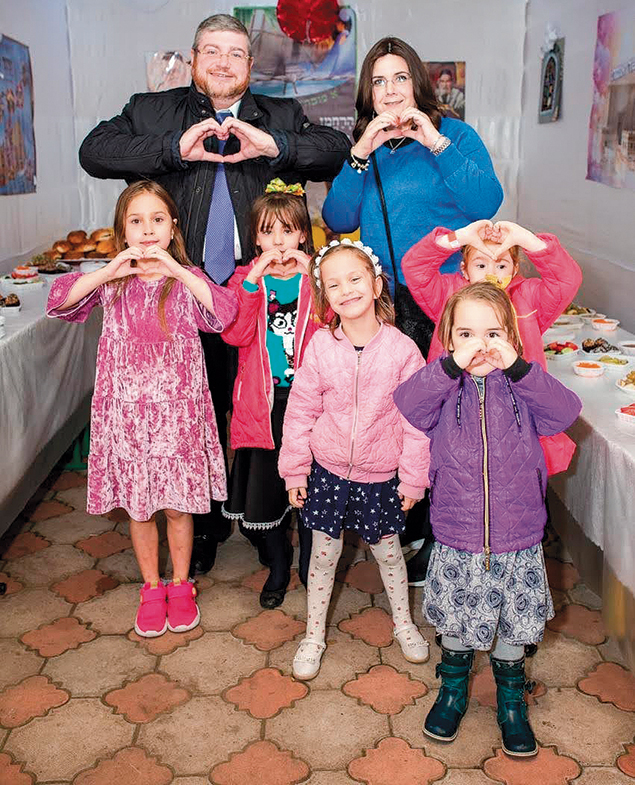 During better times, Rabbi Rafael and Ayala Kruskal and Tikva children smile in a sukkah in Ukraine.

Ed Frankel of North Caldwell and Jupiter, Florida, the chair of the group’s board, clearly is not exaggerating when he uses the word “amazing” to describe Tikva’s Odessa leadership and the children they saved.

“The leadership there was unbelievable,” Mr. Frankel said, crediting Tikva’s CEO, Rabbi Rafael Kruskal and Odessa’s chief rabbi, Rabbi Shlomo Baksht, who is Tikvah’s founder, for recognizing the need to evacuate the facility a month before the first bomb hit the Odessa area, and then for planning that evacuation.

The day we spoke, Mr. Frankel said that CNN commentator Wolf Blitzer would be interviewing Rabbi Kruskal that evening.

“He’s the one who got it done,” Mr. Frankel said. Following the advice of a hired security consultant, Tikva not only made provisions for food, supplies, security, and transportation, but secured remote lodging. “We were the only Jewish group I know of that was prepared to move on a moment’s notice,” Mr. Frankel said.

The children also were amazing, he added. Because the buses couldn’t all take the same route as they sought the safest roads, some of the children traveled for 25 hours as they fled Odessa. Many got sick along the way, and a doctor later came from the UK to help out. And yet, Mr. Frankel said, a short time later many of the children already were busy studying or playing. 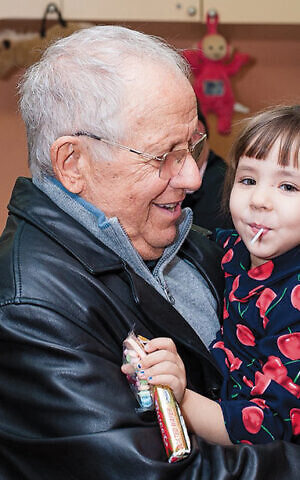 Ed Frankel of North Caldwell and a
Tikva child in Odessa.

He also spoke highly of the Israeli security guards who told bus drivers which roads they could or could not take. “It was like a movie,” he said. “They would make sure the next 10 miles were clear or warn the drivers away. At one point, a bus was on a cobblestone road for about 20 miles.”

In all, Tikvah bused more than 2,000 people out of Odessa to safety. The evacuees had to split into several groups along the way in Western Ukraine and Moldova. While some have moved on to Israel or to be with relatives in other countries, the remaining 800 Tikva members now are together in Romania. The organization’s goal is to keep it that way.

“The kids will stay together as a community,” Mr. Frankel said. “They belong to a large family, with brothers and sisters in the hundreds. If you took them away from that, they wouldn’t be happy.”

Not all of the Ukrainian staff chose to leave the children’s home. “Some of the staff use our facilities,” Mr. Frankel said, explaining that they eat and sleep there. The campus encompasses several buildings, including a synagogue, a girls’ home, a boys’ home, a nursery, an elementary school, a high school, and a small university. “We invited them to leave and work with the children in their new location because they’re going to be there for a while,” Mr. Frankel explained. Some staff members chose to leave; others chose to stay.

At this point, Tikva’s future is uncertain. “We need to raise money and feed the 800 people,” Mr. Frankel said. But they need more than food. “Each kid could only take a backpack,” he continued. “They left with a minimum of stuff. We need to buy them clothes.” 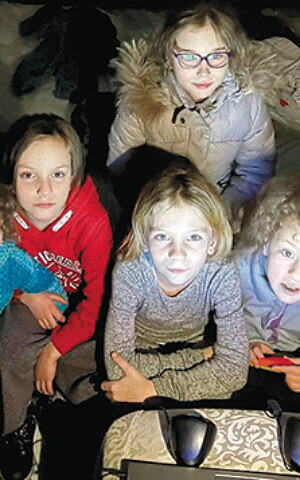 These Tikva children are in a Ukrainian refugee station, waiting to leave the country.

The evacuation cost $1.9 million – two to three times the group’s normal operating budget — and it is expected that the temporary facilities will cost more than $1.7 million monthly.

“The Romanian government was slightly puzzled by the arrival of such a large group, but on the whole has been largely sympathetic,” Mr. Frankel said. While the Jewish population of Romania is not large, “we were able to buy kosher food,” he added.

With Tikva’s immediate need to raise funds, and all the other needs pressing closely behind, Mr. Frankel said the volunteer effort “is taking more than all of my time.” He owned a vitamin company in West Caldwell but had retired from the business, so he is devoting every minute to helping Tikva.

He attributes his involvement in the organization to a kind of “divine intervention. I’m not a religious Jew, and this is an Orthodox place. I heard about it 22 years ago, and it was underfunded.” Asked to become a donor, he and a friend, Seth Gersberg of Miami, went one step further, offering to take it over. “The two of us took it over, and over the years we built it from a small operation to where we now have 1,000 Jewish children.” His wife, Leah, and son, Keith, are on the board as well.

“It was bashert,” he said. He heard about Jewish children who needed help, and that was something he cared deeply about. He has since visited the Odessa facility many times, “seeing and playing with the kids. For our 50th wedding anniversary, they made us a huge party.”

He was spurred on by “love of children and love of Judaism,” he said. “There were lots of Jewish children on the streets.” Offering them housing, food, education, and psychological and medical care, they created “a mini-city of Jews within Odessa.” And more than that, “an unintended consequence was reawakening the Jewish community in Odessa. We had 1,800 people at a Passover seder.”

Mr. Frankel is proud of Tikva and happy that all the children are out of Odessa. He’s also pleased that the organization was able to take hundreds of elderly Jews from Ukraine. The seniors – “who didn’t officially qualify as Holocaust survivors” – needed extra help. So Tikva had been providing meals for them and having older students deliver the meals and spend time with them. “We also had buses bring them to our facility to socialize with people their own age.” Now these Jews, too, have been taken to a safe place.

Mr. Frankel has stepped up to help fund these efforts, committing to match more than $100,000 from JCF fundholders at Greater MetroWest. Adam Stone, the federation’s social media and PR director, said that as of Monday, “the Federation of Greater MetroWest NJ and Jewish Community Foundation emergency funding has granted more than $1.8 million in emergency relief to our partners working on the ground in Ukraine.

“This support includes an initial $500,000 emergency allocation from our federation’s Board Managed Fund, and an outpouring of hundreds of individual gifts to the federation and through JCF donor-advised fund grants. These gifts, which continue to pour in, support the American Jewish Joint Distribution Committee, the Jewish Agency for Israel, World ORT, and other organizations working around the clock to assist the Jewish community of Ukraine.

“These collective emergency funds will address major areas of need as identified by our partners, including humanitarian support, including first aid, basic necessities such as food, medicine and clothing, and medical support; transportation to bring displaced people to the borders or safe facilities, and temporary housing either in Ukraine or while they wait to make aliyah or shelter outside the conflict zone; security grants to small Jewish organizations across Ukraine; and deployment of additional staff and materials to deliver this work in the field.”

Mr. Stone noted as well that some 300 people have signed up to donate needed supplies to Ukraine. Supplies will be going to the Afya Foundation, which will be shipping them directly to hospitals in Ukraine and refugee centers in Poland.

The federation’s CEO, Dov Ben-Shimon, and its president, David Saginow, went to Poland this week, on their way to that country’s border with Ukraine.

For more information about Tikva and to donate, go to www.tikvaodessa.org/relief

For more information about the federation’s Ukraine relief efforts and to donate, go to www.jfedgmw.org/support-for-jews-in-ukraine/.