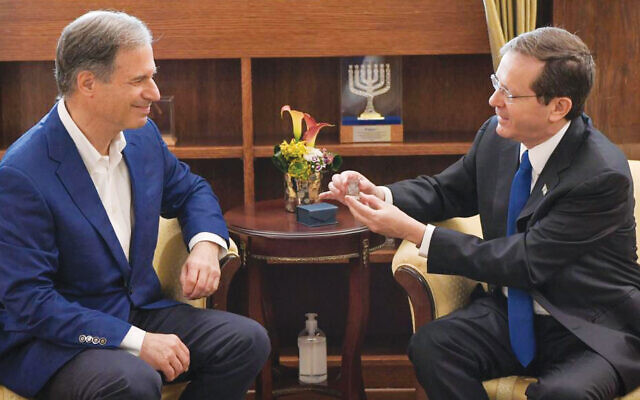 As Eytan Stibbe, Israel’s second astronaut, prepared for his trip to the International Space Station in February, he paid a visit to Israeli President Isaac Herzog, who gave him a glass cube inscribed with a prayer for the welfare of Israel.

The prayer was inscribed in the handwriting of its author, the president’s grandfather Isaac Halevi Herzog, Israel’s first chief rabbi.

Stibbe said he will bring the cube back from space and return it to the President’s Residence.

“I’ll take this prayer with me and as it says here, from the ‘edge of the heavens’ it will return here, to Israel,” Stibbe said. 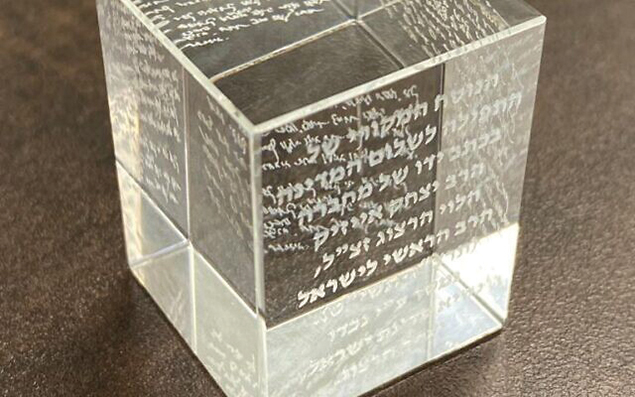 The prayer quotes Deuteronomy, where God promises to return the exiles of the Jewish people. “Even if your outcasts are at the edge of the heavens, from there will the Lord your God gather you.”

“May you continue to bring all of us, your nation, your country, and your family, great pride. Fly in peace and return in peace,” Herzog said. “Look after yourself!”

Stibbe previously announced plans to take another Jewish artifact with him, an ancient coin minted during the Bar Kochba revolt and uncovered recently in a Judean Desert cave.

Stibbe, a former Israeli fighter pilot who served under the command of Ilan Ramon, who later became Israel’s first astronaut and who died in the Columbia space shuttle disaster in 2003. Stibbe, who made a fortune in business following his air force service, is going to space under the auspices of the Ramon Foundation, which he helped found, which is paying for the flight as part of Axiom Mission I, the first non-governmental mission to the space station.