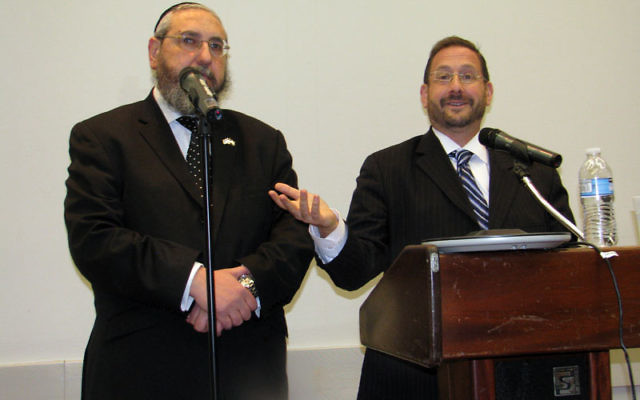 The United Nations gets an inordinate amount of attention in Michael Curtis’s new book, Should Israel Exist? A Sovereign Nation Under Attack by the International Community.

That’s because, Curtis acknowledged in an interview with NJJN, he considers the UN to be the most egregious offender of justice where Israel is concerned. Few UN agencies escape his critique, from the UN Human Rights Council to UNESCO to the Security Council.

Curtis will be a keynote speaker at the Israel Advocacy Summit on Sunday, Feb. 3, at the Aidekman campus, Whippany (see sidebar).

“There are 193 nations in the UN but Israel is the one that is picked out incessantly,” said Curtis, a distinguished professor emeritus of political science at Rutgers University. “The rest of the world is barely material at all, and that includes places like Syria, Burundi, and Congo. In Syria, where 10,000 people have been slaughtered, one would have thought the UN Security Council would step in, but no. The UN Security Council has 47 people on it, and two-thirds of the resolutions condemn Israel for human rights violations.”

Curtis wants to make it clear that he doesn’t believe Israel is above criticism.

Curtis’s book, published in January 2012 by Balfour Books, is an impassioned indictment of those who single out Israel on charges of racism, apartheid, and colonialism.

Of all the charges, the “apartheid” label offends him the most. The book started as an article he wrote in 2011 for the on-line magazine American Thinker “destroying” that charge.

“After 30-40 pages, I decided to go on to work on other allegations against Israel that need to be dispelled,” he said.

He also takes on “lawfare and universal jurisdiction” — the strategy of using international law and agencies in the fight against Israel.

“In a speech the head of Hamas made in Istanbul recently, he said, ‘We won’t attack Israel militarily, but we will act by diplomatic pressure and proper means.’ In other words, we will continue with non-military means, making use of all international law possible to attack Israel,” Curtis said.

Although many of his arguments have been taken up by the “hasbara” camp — organizations focused on improving Israel’s image and fighting its delegitimization — he argues that his book is an “objective scholarly effort” and not “Zionist propaganda.”

“I don’t think I’m targeting the usual choir, but those who might be intellectual people, open to thinking about Israel being under attack.”

Among his approximately 30 books are Three Against the Third Republic, an analysis of the rise of anti-democratic and anti-Semitic ideology in France after the Dreyfus affair, and Religion and Politics in the Middle East. For many years, he was the president of American Professors for Peace in the Middle East and editor of the Middle East Review.

In addition to his 37 years at Rutgers — he retired in 2000 — Curtis has taught at Yale University, The Hebrew University, Tel Aviv University, and University of Bologna and given lectures at hundreds of institutions.

Originally from London, he lives in Princeton and is a member of The Jewish Center there.