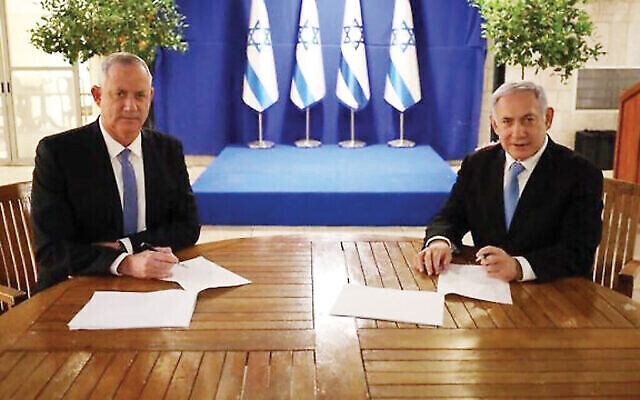 Gantz’s rationale for joining with Netanyahu was the need for a unified Israeli response to an unprecedented public health and economic emergency, and he was willing to concede a number of policy stances in order to put an end to Israel’s year of political chaos. One of those concessions was on annexation, which the coalition agreement explicitly allows the Knesset or the cabinet to consider starting on July 1.

But there is another connection between coronavirus and annexation that is less obvious. It relates to how American Jews relate to Israel and how many of American Jewry’s core commitments are going to be challenged simultaneously by these twin variables.

There is no question that American-Jewish attachment to Israel is strong, with Gallup measuring American-Jewish favorability of Israel at 95 percent. What is less clear is what precisely drives those favorable feelings.

For some American Jews, it is a sense of tribal affinity and Jewish peoplehood that leads them to feel a strong connection to other Jews anywhere in the world, all the more so to Jews who are living in the Jewish state. For others, it is a strong sense of pride in Jewish political sovereignty and Israel itself, and how far it has come since its establishment to the scientific, military, and economic powerhouse it is today. For others, it is a religious attachment to Israel as the beginning of the flowering of redemption and the return to Zion after two thousand years of exile. For yet others, it is a connection between what are often termed as Jewish values of being a light unto the nations and repairing the world and Israel’s status as a democracy in a region that is stubbornly persistent in its authoritarianism.

No matter the precise reason, the fact that Israel is both Jewish and democratic is the secret sauce that appeals to nearly everyone. Whether you are focused more on the particularism of Israel as the Jewish state and Jewish homeland or on the universalism of Israel as a democracy and inspiring example in so many different realms, the combination of the two is a potent one. But for American Jews, whose own political attachments and philosophy tend to be on the more progressive side, the evidence suggests that any serious erosion in Israel’s status as a democracy will be disproportionately damaging to their feelings about Israel and their attachment to it.

West Bank annexation, which most American Jews see as a deleterious step for Israeli democracy, is going to force an internal reckoning for many in the Jewish community. I doubt that most of us have spent time deeply considering the reasons for our attachment to Israel and commitment to Zionism. A connection to Israel feels natural and comfortable, in large part because we view Israel as Jewish and democratic. And even when there are elements of Israel with which we are uncomfortable — whether it be treatment of the Palestinians or the Israeli government casting aside American-Jewish religious priorities — we do not question Israel’s fundamental nature. We do not have to examine the roots of our connection to Israel because they are eminently easy to maintain.

And even if we do doubt our connection to Israel, traveling to Israel makes those connections deeper and stronger. Israel is a difficult place to not like once you have been there, from the history to the culture to the food to the comfortable feeling that comes from basking in the only country in the world where a majority of its people are Jews. This is what makes programs like Birthright so successful in establishing bonds between its participants and Israel, and why countless organizations organize Israel trips for both Jewish and non-Jewish constituents.

American Jews will be deprived of the enormous benefit of visiting Israel in person at the very moment that annexation is going to force them to really think, perhaps for the first time, about what drives their connection to Israel and whether Israeli actions to permanently transform the status of parts of the West Bank negatively impact that connection. Any negative feelings about Israeli actions will not be outweighed, as under normal circumstances, by visiting Israeli relatives, touring ancient Jewish sites, or enjoying the numerous delights of Jerusalem’s Mahane Yehuda market.

Coronavirus has killed, or damaged the lives, health, and welfare of so many Israelis and Americans alike. Piled on top of annexation, it may also end up contributing to historical damage to the American-Jewish relationship with Israel.