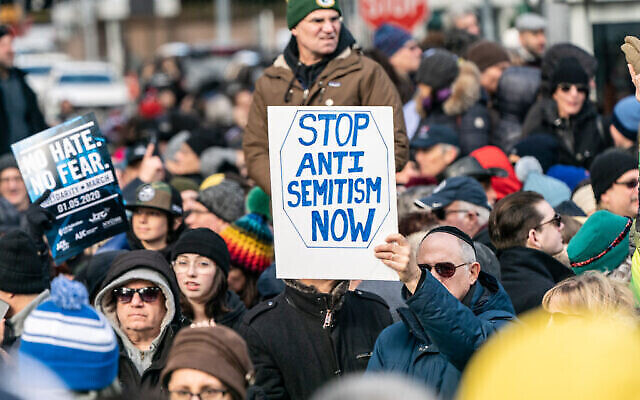 NEW YORK, NY - JANUARY 05: People participate in a Jewish solidarity march on January 5, 2020 in New York City. The march was held in response to a recent rise in anti-Semitic crimes in the greater New York metropolitan area. (Photo by Jeenah Moon/Getty Images)

Is it time to retire the term “anti-Semitism”?

It’s not a new question, although it was given new life by historian Deborah Lipstadt and new urgency amid a months-long spike in anti-Jewish attacks in the United States and Europe. Lipstadt points out in her recent book “Antisemitism” that the hyphenated version of the word implies that there is “such a thing as a ‘Semitic’ people,” when the word “Semitism” itself was coined to describe a group of similar languages. The term also has roots in what the International Holocaust Remembrance Alliance calls “a form of pseudo-scientific racial classification that was thoroughly discredited by association with Nazi ideology.”

Lipstadt doesn’t counsel letting go of the term entirely. But she does away with the hyphen and spells it “antisemitism” because such an “illogical, delusional passion” doesn’t “deserve the dignity of capitalization.” The IHRA also prefers “antisemitism,” and in 2015 seems to have convinced Microsoft to adjust its auto-correct feature to allow both spellings.

Despite the logic of these arguments, the lower-case, no-hyphen spelling hasn’t become standard in the Jewish world. The American Jewish Committee, World Jewish Congress, and Yad Vashem, Israel’s Holocaust authority, have adopted “antisemitism,” but the Anti-Defamation League still uses “anti-Semitism,” as does the Simon Wiesenthal Center.

In the Jewish media, the Jewish Telegraphic Agency, the Times of Israel, the Forward, Tablet, and NJJN/The New York Jewish Week all use “anti-Semitism.” In the general media, “anti-Semitism” remains the preference of the Associated Press and The New York Times. European media tend to use some variation of the lower-case spelling.

We at NJJN have weighed the pros and cons and haven’t yet adopted “antisemitism,” mostly for the sake of consistency and continuity. For some, the lower-case somehow demotes the word or concept itself, or represents a solution to a very minor and rarified problem. We’ve even heard arguments to bypass the word entirely, on the theory that a vile form of bigotry should just be called what it is: Jew hatred.