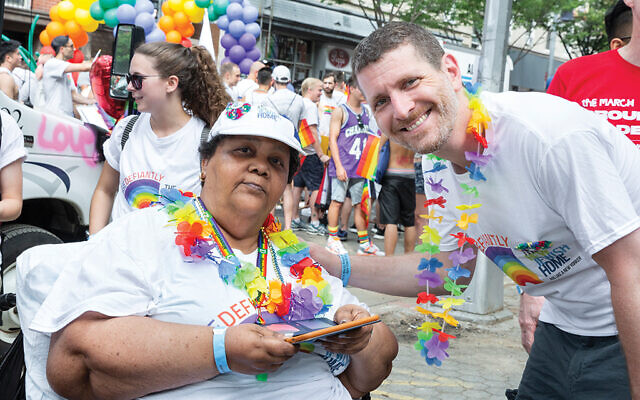 Out in the community: Dr. Farber at a recent Pride parade.

One of the nation’s largest and most diversified not-for-profit geriatric health and rehabilitation systems, The New Jewish Home serves over 8,000 older adults each year in its homes and campuses in the Bronx, Manhattan and Westchester, through short-term rehabilitation, long-term skilled nursing, low-income housing, and a wide range of home health programs. The Jewish Week caught up with Dr. Farber recently at The New Jewish Home. This interview is edited for length and clarity.

What were your earliest memories of being nurtured? And how did this nurturing inform your ability and your power today as a healer and a medical doctor?

I had a very close relationship with my grandparents: Grandpa Hy, from Belarus, and Grandma Sylvia, who was born in Paris. They came religiously every Sunday to visit; every weekend, fail none. This level of devotion allowed me to develop deep trust and fueled my interest in my career to serve older adults.

Can this seed of compassion, planted at an early age, allow us to become nurturers in later life, as men and women of compassion?

Compassion is the essential ingredient to giving high-quality medical care. Even if you know the latest and the greatest technology, without compassion the expertise and technical skills become irrelevant and ineffectual. 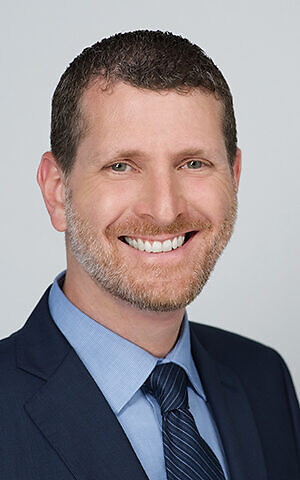 “Compassion is the core of all good medical practice,” Dr. Jeffrey Farber says. Photos courtesy of The New Jewish Home

The word in Hebrew for mother’s womb, rechem — is from rachmanot — compassion. And what greater empathy can exist than that of a mother’s womb? What do you think is the quality of that grandparent’s love or the relationship with an elder, that allows us to cultivate empathy?

It’s because they listen and they have time. They see us.

The very fact that they are older allows them to be present with their grandchildren in a way that’s greater than young adults, who are distracted. I think the kids pick up on that.

Compassion is at the core of all good medical practice. A woman here with advanced dementia was upset that someone had stolen her car; she wanted to go to the police and described where she parked the car. Without confronting her the staff expressed empathy, asking, “What kind of car was it? Tell us about your car.” From this deep knowing and care they were able to comfort her.

Seeing that level of caring was priceless. It was worth everything to me. This is what I was trained to do. I’m a physician executive, a doctor and a CEO, and this kind of care is of the highest value to me, the reason I came here.

Surveys reveal that adults over 65, by 2030, will be about 20 percent of the population. Yet there are fewer than 300 doctors per year completing geriatric training in America today.

This is why we have to make a societal shift. American society views older people as a financial drain on the economy. They have called it “a silver tsunami.” I cringe every time I read that phrase. You’re describing the fastest-growing segment of the population. The first time in human history where we will have more older adults than younger people. And they can still live meaningful lives with purpose.

The “silver tsunami” phrase insinuates a calamitous, financial drain, as opposed to its being a great blessing that we must value and appreciate.

My grandpa would smoke a pipe and blow the smoke in our hair and then pat our heads and make a little halo coming up over our heads. We thought that was so cool. Grandpa’s pipe: I can still smell the cherry aroma associated with Grandpa’s pipe.

But my grandpa got bone metastases from prostate cancer. He was one of the earliest patients to get an implanted morphine pack. It was large and surgically placed in his back. The bone metastases was very painful. This was my first vision of a pressure ulcer.

Is this part of what inspired your interest in geriatrics?

It was my first experience with home-based palliative care. I remember the nurses coming to visit my grandpa when he was in bed toward the end of his life. And I believe these years brought me to love geriatrics. My appreciation and affection for my grandparents and having witnessed the fragility of end-of-life, brought me to love caring for the elderly.

I never had a dislike for the wrinkles, the smell of frailty; witnessing the pain. I felt, “I’m very interested. I want to help people.”

I was 17 when my grandpa died, and then my grandma died less than a year later. I knew then, absolutely, that I was interested in geriatrics and would serve this vulnerable community.

Your poignant story brings to mind the words of Rabbi Abraham Joshua Heschel, “Old age is not a defeat but a victory, not a punishment but a privilege.” And the surgeon and author Atul Gawande describes how his 100-year-old grandfather “was consulted on all important matters — marriages, land disputes, business. He was revered not in spite of his age, but because of his age.” How DO we pass down this philosophy and heartfelt care?”

One of my chief priorities for The New Jewish Home is to build upon our GCD program — Geriatrics Career Development program. We are bringing the young people in from the community and transforming the way they view our aging population.

We idolize youth, right? Their ability to compete, their prowess. By definition older adults are out of the race.

This program is intergenerational and it’s bi-directional. We began it here 14 years ago and have already graduated over 600 high school students. We serve at-risk youth from very disadvantaged public schools, and almost all are the first in their families to go to college. They spend hundreds of hours on the floors volunteering; that’s the intergenerational piece.

We train certified nurse assistants (CNAs) to be patient care technicians (PCTs), phlebotomists, who draw blood, and EKG technicians. Last year, all 70 got into college.

And we’ve hired a couple of hundred already that have trained in our own program. So these are job opportunities.

And it’s a way to also combat ageism because you are taking kids at an early age and impressing upon them not to be scared by wrinkles and by graying.” 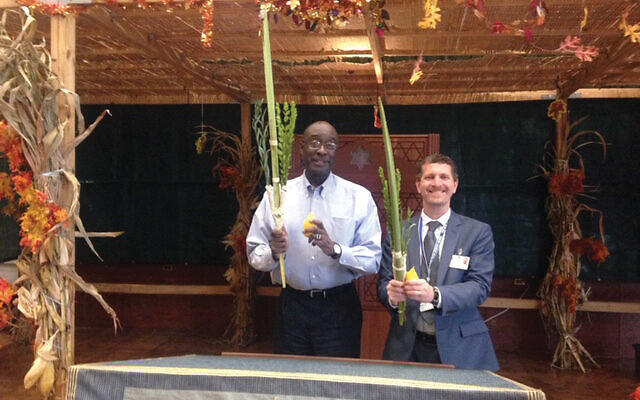 “Compassion is the core of all good medical practice,” Dr. Jeffrey Farber says. Photos courtesy of The New Jewish Home

There is a fundamental problem with the entire field and with nursing homes in general. People are fearful of and rejecting their future selves.

“I can’t get out of bed on my own,” they say. “I can’t feed myself. I need somebody to help clean me after I go to the bathroom.” They imagine themselves becoming this person. “No, No, No. I never want to go to a nursing home. You’ll have to shoot me first,” they protest. So the rejection of the future self being so reliant on others, and often reliant on strangers, is the stigma associated with nursing homes.

What do you think is causing this? What makes so many of us scared of wrinkles and even recoil when we see the graying?

I’m starting to get further insights into this phenomenon. I think there’s a medical aspect to this as well. We continue to evolve as people and our brains continue to mature as we develop. So when I think back to my 17-year-old self at the time that my grandfather died, I’m not the same person. Your brain truly does continue to develop and you think differently and it’s hard to put your head in somebody else’s mindset and say, “I would never want to be in a nursing home.”

People say, “I’d rather be dead.” It’s very, very different when you’re … God forbid, if you are ever in that situation. The brain changes. It’s very different.

Is part of this the way older Americans and the whole idea of aging are viewed today?

What we really need to do is change the way society approaches and views older adults. And we need to address this instinct to recoil head on! We need to begin to appreciate and include older adults in the fabric of society.

It’s all about changing our misconceptions. One common misconception about elders is that they complain too much.  Studies show that older adults — in fact — underreport their symptoms. Elders have multiple and chronic conditions in various stages of severity. “I don’t want to burden the doctor,” is the common refrain. You have to work to get people to open up.

You know, we have a very good ability to self-heal. The tincture of time is valuable.

Can you give me an example of this?

I became very close to one patient, a Holocaust survivor who had remarried and built a new life after the war. He showed me cigarette burns on his arms from being tortured by the Nazis.

“I’m O.K.” was his mantra. But it sounded like he was having trouble breathing. “A little bit,” he said. It was a lot more than a little bit. “Maybe you need to be examined?”

When we checked his oxygen level it was quite low. He also had a lung infection that needed to be treated.

We became very close. But the greatest lesson he taught me was how to re-engage with life WITHOUT complaining. He challenged my misconceptions. He taught me that with resilience, any horror and any tragedy can be survived.”

How do we address the ageism head on? What would you advise someone who is still ill at ease with the senior population?

I would advise them to come visit. Even if you just come for 15 minutes. Push yourself. There are Catholic services, Protestant and Jewish Sabbath services every Friday afternoon and Saturday morning.

We have our garden, which is a little oasis, one of our gems. And it’s a safe, health-promoting environment. Higher oxygen content is in the fresh air. I’m a believer in “nature deficient disorder.” We need to be connected to nature. And here is an outlet for that in a controlled environment.

I once witnessed a wedding in the garden near the turtle pond. Dressed in a lace gown, the bride lay on her back, and held the hand of her beloved. She wanted to marry him before she died. The eternal quietude of that ceremony still lingers within me. Is this what you were getting at? Are you referring to the garden as one way for our seniors to sustain the soul?

Yes. That’s what I mean. Being human is all about relationships. I would advise them, “Come. Come visit. Sit and talk.”

Dvorah Telushkin, a regular contributor, is chaplain at The New Jewish Home.