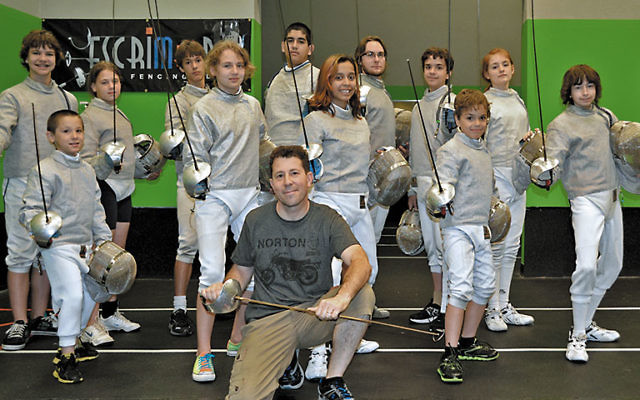 In 1992 in their family sukka, Linda Oppenheim and Bob Karp with their children, Michael and Emma.

When Linda Oppenheim and Bob Karp of Princeton set out to adopt in the late ’80s, they were already an older couple and wanted an infant. Based on a referral from a friend, the couple connected to a lawyer working in the Dominican Republic.

“I was well aware that the child we were adopting would be a different race from me,” said Oppenheim. “Bob’s sons from his first marriage were Jewish African-American, so it seemed to me this would be a nice fit.”

As with all parenting, it has been a learning experience. When the couple made their adoption decision, they did not think at all about how their children would be received by the Jewish community. “We knew we were living in a town where people were educated, open-minded, and had liberal values, and we expected that would be fine,” said Oppenheim.

But her perceptions were not the same as her children’s. Although nothing specifically negative had happened at the Jewish Center, where they are members, she said, Oppenheim’s daughter Emma, now 21, and son Michael, 24, never felt completely comfortable there. This realization came to her when she saw, in contrast, their level of comfort when the family attended — as they have since 1997 — retreats of the Philadelphia-based Jewish Multiracial Network.

At one of the retreats, a young teen encapsulated for Oppenheim what it is like to feel completely accepted in a Jewish setting: “This is first time I’ve been at a Jewish event where there are people who look like me,” said the teen.

On Oct. 26, Oppenheim will lead a program at the Jewish Center in Princeton, titled “Racial Diversity in the American-Jewish Community: Talking Together about Creating Pathways of Inclusion.”

Participants will learn about what people of various races and backgrounds encounter as they try to live and practice as Jews, and what can be done to make Jewish institutions warmer and more welcoming places. The program will include two facilitators from the Jewish Multiracial Network.

A 2011 survey by UJA-Federation of New York noted that about 12 percent of the 694,000 Jewish households in the eight-county New York area are biracial or nonwhite. “The large number of biracial, Hispanic, and other ‘nonwhite’ Jewish households — particularly pronounced among younger households — should serve as a reality check for those who are accustomed to thinking of all Jews as ‘white,’” wrote the study’s authors.

Sometimes the Jewish community gets it right. For example, when Oppenheim’s son, Michael Karp, was in the Jewish Center’s preschool, she was happy to see his self-portrait on brown paper with curly hair and appreciated the teacher who must have made sure those materials were available.

But sometimes things happen that make “different” people feel like they don’t belong. When Oppenheim’s daughter, Emma Karp, was at the very liberal Jewish camp she attended from age eight through 13, one of the campers said she had felt discriminated against, as a Jewish person, by black students at her school. “The counselors didn’t pick up on it or do anything about it,” recalled Oppenheim.

When Emma was at Westtown School, a Quaker institution in West Chester, Pa., that had made enormous efforts to include students of color, Oppenheim commented to Emma that the environment seemed very diverse. “It’s not so diverse, Mom,” Emma said.

“That’s when I realized that I, as a white person, was seeing kids of color,” said Oppenheim. “Emma, who identifies as a kid of color, was sitting and saying, ‘There’s almost no one here who looks like me.’”

“As a white person, one thing I have learned is that I need to listen,” said Oppenheim. “One issue is that when Jews describe their community and the attitude and experience of what people of color must experience, it’s not their experience. There is a limit to what we can do to describe other people’s experiences; it’s much better that we listen and hear what it is.”

In her program, Oppenheim will aim to raise awareness of some of the issues experienced by Jews of color. Do they face assumptions about who they are and what they know and do not know? If someone sees a mixed-race couple, do they immediately assume that the white person is the Jew and the person of color converted, which may not be the case?

Oppenheim said she plans to examine religious school materials, Jewish children’s books, and Jewish clip art, with the goal of including more diverse images. “I hope that in an organized fashion we can strategize about the movements and publishers who create images of people with different races, physical abilities, and all kinds of families….”