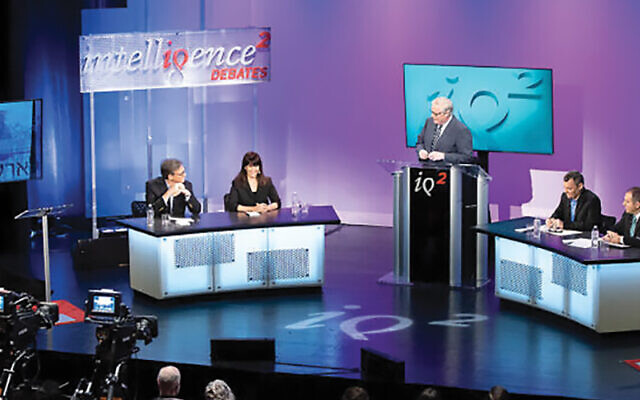 The moderator of a debate about whether anti-Zionism is anti-Semitism seemed taken back by the ferocity of the event.

“This honestly was one of the more intense debates that we’ve had,” said John Donvan, the veteran journalist and moderator, towards the end of the Intelligence Squared debate held Feb. 27 in Manhattan. “I think probably there was more of a philosophical gulf between the two teams than we’ve seen in most of the debates we’ve ever done. I think the positions were deeply held [although] not, at this point, highly reconcilable.”

That intensity would surprise few Jews for whom the subject is a regular conversation, whether it is to denounce critics of Israel as anti-Semitic or to question the legitimacy of a Jewish nation-state.

Approximately 350 people attended the debate, paying $40 each for a ticket. Perhaps most surprising were the 29 percent of audience members who showed up undecided on the polarizing motion being debated.

Intelligence Squared puts on debates meant to foster intellectual discourse on polarizing political questions. Whether the debate was really effective at raising the intellectual tenor of the discussion about anti-Zionism was somewhat of a wash by the end of the night.

The debate kicked off with opening statements from the two teams. Arguing for the motion that anti-Zionism is in fact the new anti-Semitism was Bret Stephens, the New York Times columnist known for his Never Trump conservatism and passionate defense of Israel. Stephens, who has participated in four previous Intelligence Squared debates, began by explaining “anti-Zionism isn’t criticism of Israel.” It is, however, “a call, whether by force or other means, for Israel’s destruction.” Anti-Zionism, he said, is “an ideology that is usually in intent and always in effect anti-Semitic.”

Next came Peter Beinart, a contributor to The Atlantic and editor-at-large at the Jewish leftist magazine Jewish Currents, arguing that anti-Zionism is not necessarily anti-Semitic. After all, he argued, anti-Zionism is not as marginal within the Jewish community as Stephens argued, pointing to Satmar chasidim and other fervently Orthodox Jews here and in Israel who oppose a Jewish state.

Stephens’ teammate, Knesset member Einat Wilf, began her remarks with a disclaimer. “So, I have to tell you,” she said. “I’m certainly not here, I’m sure many of you are not, for Talmudic discussion of the finer points of anti-Zionism and anti-Semitism.”

In the fourth row, a young woman stage-whispered to her friend, “Yes, we are.”

Across the stage, Yousef Munayyer, the executive director of the U.S. Campaign for Palestinian Rights and Beinart’s debating partner, nodded vigorously. He went on to argue that “merely opposing a particular political ideology” like Zionism does not make “someone a bigot.” Saying so, he said, is “a ludicrous notion and one that seeks to effectively put a political ideology beyond reproach. It demands that either we accept the very ideology that oppresses us or accept that we are bigots who must be marginalized from the discussion about it.”

As the debaters threw the usual talking points back and forth — that the Palestinians rejected the United Nations partition plan in 1948; that the occupation left millions of Palestinians disenfranchised — the audience responded audibly. Stephens’ mention of partition elicited groans. When Munayyer said he supported Bernie Sanders for president, a young woman booed before being shushed by an older woman sitting in front of her.

Audience members included Gulyás Virág, a non-Jewish Hungarian Zionist activist with a Facebook page called “Almost Jewish.” She asked whether the anti-Semitic comments directed at her for her Zionism do not imply that anti-Zionism is anti-Semitic. Nearby sat the feminist activist Letty Cottin Pogrebin, who famously wrote about anti-Semitism and anti-Zionism in the women’s movement. She asked the debaters how they would define Zionism and was told by Donvan that her question was far beyond the scope of the debate.

“In our view, the winner or loser issue is not irrelevant, but it’s secondary to the fact that the conversation was had,” said Donvan in closing the debate. The winner, determined by which side changed the most minds, was the Beinart-Munayyer team, which gained 12 points for its position against the motion, for a total of 48 percent of the room. But the Stephens-Wilf team came close, with a gain of 10 points for its position that anti-Zionism is anti-Semitism, for a total of 45 percent of the room. Only 7 percent of the audience members remained undecided at the end of the debate.

When Donvan asked the debaters to share a piece of writing that contributed to their understanding of the topic, Stephens answered with a faint-praise jab at one of his opponents. “Well, I’m a constant reader of Peter’s columns because I like to see where he goes wrong,” he said. “But let me say that differently,” he interrupted himself. “I want to hear the most intelligent case on the other side, and Peter consistently makes it.”