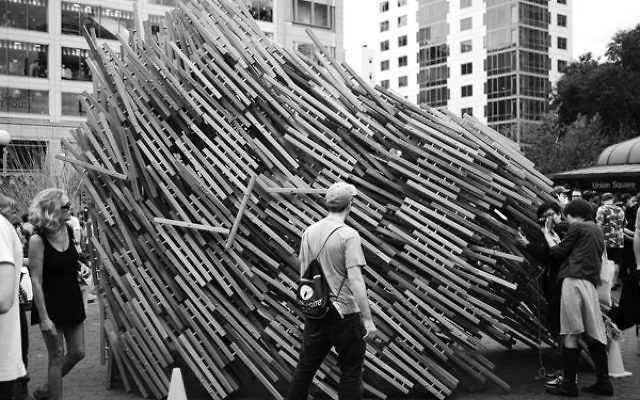 One of the 12 winners of the Sukkah City contest:

When Joshua Zinder, architect and principal at JZA + D in Princeton, heard about the international design contest called “Sukkah City” in 2010, he decided his office should enter. “I have been building sukkas forever, and I always thought there should be design in the creation of a sukka,” he told NJJN.

Zinder’s office submitted two designs to the contest. The idea for the first one came years ago from his daughter Leah, who with her fellow students at the Solomon Schechter Day School of East Brunswick had built a Lenape Native American longhouse at a state park, and who had told her father that it was like building a sukka.

Zinder, a member of The Jewish Center in Princeton, took her idea and transformed the concept of the traditional longhouse, with its lashed ribs covered with fabric, skins, or bark, into a holiday booth made with PVC pipes, canvas, and cords. His motivation for creating a Lenape longhouse sukka and submitting the design for competition went beyond the similarities of the two structures to the fact that the Lenape Indians, who traveled up and down the East Coast, were, he said, like the Jews, wanderers — “a transient population that builds transient/mobile structures,” one of the symbolic concepts behind the erecting of sukkot.

The idea for his second design, “Sukkah Cubed,” was to connect to the cycle of life. Typically the first time people build a sukka is as part of a couple who might invite other couples for a holiday dinner. Later, when children arrive, the guest list expands. So Zinder created a simple, lightweight eight-foot cube module made out of wood and cardboard that could easily be expanded to eight by 16, and then 16 by 16.

The contest inspired more than its entrants. Sukkah City — a cinematic look at the project — follows the jury’s deliberations to select the 12 winners (Zinder’s, however, not among them) out of some 400 entrants, documents the design concepts that guided the architects, charts the construction of the sukkot, and chronicles the assembly of the winners for display in New York’s Union Square and the public’s response.

Now, Zinder has arranged for a screening of the approximately hour-long documentary at The Jewish Center on Tuesday, Oct. 18, at 7:30 p.m. Also appearing for a Q&A will be its director and producer, Jason Hutt.

Hutt, who is Jewish and lives in Brooklyn, said that as a filmmaker, he keeps his eye on calls for interesting projects in the Brooklyn Arts Council’s weekly newsletter. When he saw the announcement for the Sukkah City venture, he was especially excited by the idea that the winners would be displayed and that the public would be invited to engage with the designers.

Hutt told NJJN he was drawn to the idea of creating new designs for the “very boring and generic box structure which is most people’s sukka.”

“I thought that a film that explored the creativity of architects and designers, combined with trying to innovate the traditional Jewish sukka, would make an interesting show,” he said.

Commenting on the fact that many of the contestants were not Jewish, Hutt said the non-Jews came with no “preconceived notions” and could “think differently and respond differently” in adhering to the contest specifications. Those included a description of the sukka as “a means of ceremonially practicing homelessness, while at the same time remaining deeply rooted” and laid out the traditional talmudic strictures, i.e., it must have at least two-and-a-half walls and a roof covered with organic materials that allows those inside to see the stars at night.

Noting that “the winners were fascinating,” Zinder said that one element shown in the film saddened him: “In my head the sukka is supposed to be a reusable structure, but it looked like maybe half were chopped up and thrown into the garbage. Part of what Sukkot is to me — it is supposed to be a sustainable holiday and is supposed to talk about longevity and continuity.”

Hutt saw the significance of Sukkah City in its currency, its expression of Jewish meaning in the present. His film focuses on “what kinds of people, things, and events are happening now that are very specific to this time in history…. Sukkah City happened one time…. When you see something very interesting and of the moment and different and innovative, you try to go out and film it and share it with other people.”

Photos of some of the sukkot from the competition, including Zinder's longhouse, are on display in the Jewish Center’s lobby during September and October.