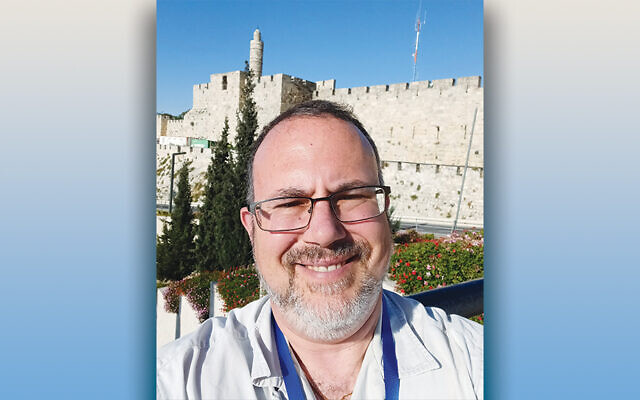 Rabbi David Fine took this selfie on a trip to Israel with the Jewish Federation of Northern New Jersey this summer; that’s when he thought through his Law Committee paper.

As the covid pandemic hit, all synagogues had to decide how they could continue to provide their core services to their members. People were isolated at home, yearning for connection and community; their religious leaders recognized that need but had to work within the constraints the virus imposed to come up with new ways to meet them.

In surprisingly short order, many synagogues, aided by their movements’ ruling bodies, managed to do that.

Each stream of the Jewish world had its own specifications. Halacha — Jewish law — forbade Orthodox synagogues from using any electronics on Shabbat or holidays and did not allow them to count people — men, that is — who were together virtually from making up a minyan. Reform congregations, informed but not bound by halacha, were free to use technology as creatively as they chose, including on Shabbat and holidays, but generally did not offer daily minyamin before covid, and so did not have to come up with rules for them during the pandemic.

But the Conservative movement, which considers itself bound by halacha but not necessarily its traditional implementation, a movement that works hard to understand the Jewish legal system in context, as a set of rules that is flexible enough to bend rather than to break, and whose shuls usually offer minyanim at least once a day, found itself caught in between the two extremes. To be technical, its rabbis were caught between a rock and a hard place.

Most adapted fairly quickly. Some did not allow any minyanim during Shabbat, but many did. The movement’s leaders came up with ways to count people as part of the minyan, thus allowing them to say kaddish.

Habits and assumptions changed during the pandemic. People who rarely found time to fit minyan-going into their lives, at least not on a regular basis, found themselves regulating their days by its rhythms. It was easy to join — just turn on your computer — and there were real people in all those other little boxes. Synagogues that found it hard to gather in-person minyanim did not have to struggle with getting one online.

Now, however, it seems as if the pandemic is receding; it’s not ending as quickly or evenly as we’d hoped once the vaccines were made available — thank you, Delta variant, thank you, vaccine-averse neighbors — but it’s clear that although we don’t know when it’ll be gone, its end is near.

The Conservative movement’s Committee on Jewish Law and Standards has voted to accept four possible approaches to the daily minyan that its synagogues can adopt; the committee’s 25 members generally do not impose mandates on its synagogues, but it does elicit halachic responses from its members and then decides if those responses are logical and appropriate.

Rabbi Dr. David Fine, who leads Temple Israel and Jewish Community Center in Ridgewood, is a new member of the law committee; he wrote one of the four responses.

The committee was tasked with deciding if, “going forward, there is another way of doing this,” Rabbi Fine said. The outside world has changed. “You can be at a business meeting on a screen, and that counts as being present. So then why can’t we do the same thing at a minyan, understanding that the world has changed and the meaning of being present has changed. Shouldn’t that be reflected in Jewish law?”

One element that has changed irrevocably is the relationship between institutions and technology. Before the pandemic started, many synagogue leaders didn’t have much tech and they didn’t know how it worked. Now they do.

Rabbi Fine’s synagogue had started thinking about streaming Shabbat services before covid hit, because it had gotten a Homeland Security grant for better cameras. “It’s recessed and it can capture both audio and video, and our tech committee said that we could broadcast services on our website,” he said. It could be acceptable halachically because it would be turned on before and would run unattended. “We were looking at it in terms of privacy and security,” he said. The lessons they’ve learned will continue to apply once the pandemic is over. “Security is not a front-burner issue anymore because people have been doing it for so long by now,” he said.

But Conservative shuls did need guidance on how to run minyanim, both on Shabbat and during the week, during the lockdown. The official but not binding position, which ironically had been reached years ago, in 2001, when the technology was nascent and the pandemic unimagined, was that people can join a minyan online, say kaddish online, and be discharged of the obligation to say it, but they could not be counted in the minyan. In 2020, Rabbi Fine used halachic arguments about counting people in hallways, looking through windows, and on balconies to suggest a more inclusive approach.

His own congregation was guided by his views. “We took one Shabbat off after the pandemic hit; we livestreamed during the second one, and by the third we were Zooming,” he said. “We Zoomed until this June, stopped in July, when we went back in person.” Shabbat morning services are inside, masked and socially distanced, and passively livestreamed; Friday night services are outside.

So as the pandemic began to wane — before the Delta variant hit and upended assumptions yet again — the Conservative movement’s law committee looked at what should come next.

Rabbi Joshua Heller, Rabbi Fine’s friend and classmate from the Jewish Theological Seminary who now heads Congregation B’nai Torah in suburban Atlanta, also sits on the movement’s Committee on Law and Standards. Rabbi Heller — who grew up in Bayonne, the son of Rabbi Zachary Heller, the longtime leader of the city’s Temple Emanu-El and a prominent Conservative movement leader — wrote a paper, as the teshuvot, the answers to halachic questions posed to the committee are called informally, laying out three possible ways forward. The committee accepted all three of them.

(And no, this isn’t wishy-washy, a way for the movement to duck actually answering questions, Rabbi Fine said. “It’s authentically Jewish. The Talmud doesn’t give only one view. We don’t have a pope who says: ‘This is the law.’ Conservative Judaism always has felt comfortable with having a big tent.”)

The first position, Rabbi Fine said, is “that you can constitute a Zoom minyan for the purposes of saying the mourner’s kaddish. That agreed with one of the positions from the beginning of the pandemic. A number of shuls that had a daily minyan didn’t do other parts of the minyan, the parts that you’d skip if you don’t have a minyan. That makes practical sense. Many people join the daily to say kaddish.

“The second option was that you can use a Zoom minyan to make a tenth person if there are nine people present.” That’s an option for mainly in-person minyanim, and it follows the well-known precedent of opening the ark and counting a Torah scroll, or a child old enough to be sentient but below bar mitzvah age, or even a random non-Jew. That option was only “for community that already uses those loopholes,” Rabbi Fine said.

“The third option says that if there is a minyan present through virtual means, or if there is a hybrid group, as long as there is a real-time video and audio link, so that people can see and hear each other, then any ritual can be performed. You can do anything on a Zoom minyan.”

Rabbi Fine, who had taken the most liberal position on how to run a minyan at the beginning of the pandemic, found himself dissatisfied; so dissatisfied, in fact, that he felt compelled to write a paper outlining a fourth position. “I argued for the 2001 precedent, the one that said that the minyan has to be constituted in person,” he said. “You can connect through the internet, but you don’t count.

“I was to the left of Rabbi Heller a year and a half ago, but now I’m to the right of him. I was fully in favor of the Zoom minyan as an emergency measure, but I really meant emergency. Once we are able to form a minyan in person, the minyan should be in person.”

There are both halachic and real-world reasons for his belief, he continued.

“Virtual and hybrid meetings are much better than nothing at all, but they are difficult,” he said. “They are very lonely. We need connection. Just because we can do it virtually doesn’t mean that it’s better to do it that way.

“Part of the lesson of the pandemic is about being face to face with people. We have learned how much we miss it. And remember that a synagogue is a beit knesset — a house of gathering. That’s the essence of what Jewish tradition is. Yes, it is easier to get to meetings on Zoom than in person, but we can’t have the conversations in the hallway. The chat function is not the same thing.”

The technical basis of the disagreement between the rabbis Fine and Heller is the concept of “sha’at dehak” — literally, a pressing hour, metaphorically an emergency. Rabbi Heller is willing to define an emergency leniently; Rabbi Fine is not. On a Shabbat, say, “if the municipality would put out an advisory to stay off the roads, or if the synagogue lost heat, that would be a sha’at dehak,” he said, and that would mean an immediate turn to Zoom; he recalled such a memorably snowy Shabbat a few years ago. Then, he had in-person services; now, he would not. “But it has to be temporary,” he said.

He talks about why his father drew a hard line on counting only actual adults in the minyan. “He always said that the leniency made sense in the old country, when there were only nine adult Jews in the shtetl, and the 10th lives miles away, and to get there he’d have to harness Tevye’s ox.” And anyway, if you often have problems getting a tenth person, that’s telling you that you have problems.

As far as the Conservative movement is concerned, its rabbis and lay members have a variety of ways to choose to go to a minyan. We all have learned a great deal, including how powerful it is to connect, even online, to people who are too far away physically to be able to come to a minyan, to a shiva, even to a lecture. The wisest way forward is to consider and balance that new knowledge. Rabbi Fine feels that the four choices the Conservative movement offers for minyanim — particularly his, of course, but all of them — represent different ways of forming that balance.