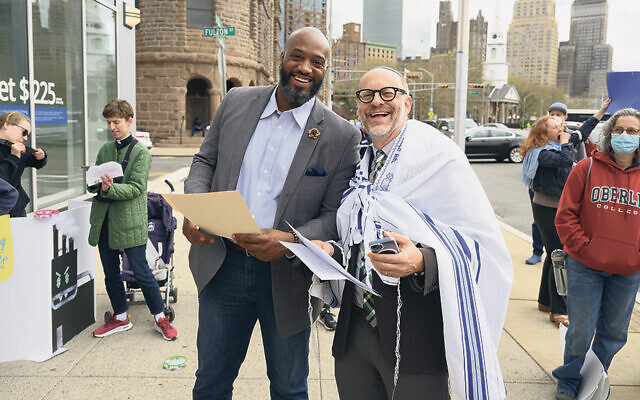 At the beginning of April, the United Nations’ Intergovernmental Panel on Climate Change reported that while some progress has been made in ameliorating global warming, there is only a slim chance of averting a rise in temperatures of 3 degrees Fahrenheit unless greenhouse gas emissions peak within three years.

Three degrees may not seem like much, but the temperatures have already risen nearly 2 degrees, and the impact can be seen in unprecedented fires, storms, and heat waves around the world. This week, temperatures in India’s Punjab region, which is its bread basket, are predicted to hit a crippling 120 degrees Fahrenheit.

The report urged that existing subsidies for fossil fuels be reduced if not stopped — and the world’s quantity of greenhouse emitting fossil fuel plants must be reduced, not increased.

To that end, climate activists have called on banks and investment companies to stop funding pipelines and other new facilities.

(Such calls for divestment have received push back from fossil fuel interests. Last year, the state of Texas passed an anti-fossil-fuel boycott law modeled after the anti-BDS laws championed by the Israeli government and American Jewish organizations; similar measures have been introduced in several other Republican-controlled state legislatures.)

So to help bring counterpressure on the banks, Dayenu, the Jewish organization fighting for action on the climate, sponsored a series of public demonstrations targeting top banks during Passover. Among the dozens of events nationwide was one in Newark last Thursday.

Dayenu’s website explained the focus on banks: “Even as many top Wall Street firms have made commitments to the public, their books show that they are not (yet) taking meaningful action to cut financing of coal, oil and gas. These banks and asset managers can drive a rapid transition to sustainability — but only if they divest from destruction and invest in a clean energy future.”

Which is why Rabbi Ariann Weitzman of Montclair’s Congregation Bnai Keshet was in Newark last Thursday, holding a sign reading “Dayenu Enough!”

“So we can all declare freedom from fossil groups,” she said, connecting the protest to last week’s holiday.

Rabbi Weitzman said that many members of her congregation are engaged in the Dayenu chapter the synagogue launched last year. 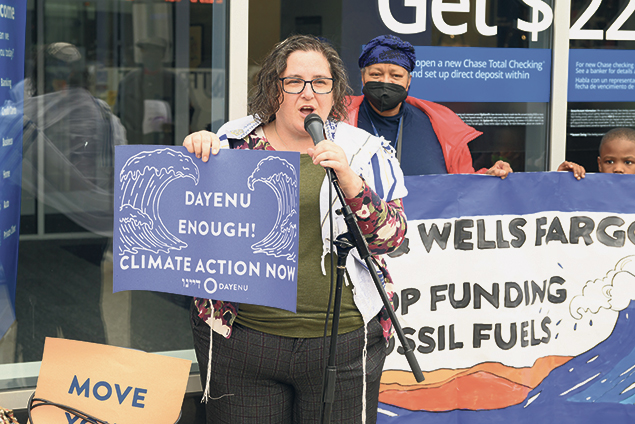 In thinking about the protest, which had been suggested by the central Dayenu office in Manhattan, “we immediately thought we should be working with our interfaith partners, because it’s everybody’s earth. We wanted to broaden the message.” And with Passover coinciding with Easter and Ramadan, the joint action made a lot of sense.

The protestors gathered on Newark’s Broad Street, where a branch of the country’s largest bank, JP Morgan Chase, is three doors down from a branch of the third largest, Wells Fargo.

“As part of the action, I went into the Chase bank with one of the children from Masjid Muhammed, a sweet little boy about seven named Amir, to deliver a letter to the branch manager to pass on to — God willing — the CEO,” Rabbi Weitzman said. “The branch manager was very sweet with us.”

Nicole Miller is a longtime member of Bethany who took part in the protest.

She is a member of the Newark Environmental Commission and chair of the Newark Green Team, which brings together environmental activists, city organizations, and city business groups for activities that include tree plantings, air quality monitoring, and “making sure the city attained and maintains its Sustainable Jersey certification.”

“Enough is truly enough,” Ms. Miller said. “It is unacceptable that banks like Chase and Wells Fargo use money from our communities to invest in projects that endanger our lives and our children with worsening heat waves, floods, storms, and air pollution.”

She noted the impact that pollution from cars and trucks and electric plants powered by fossil fuels have on the children of Newark, “which has the highest rates of asthma in the state. More than 25 percent of the children in Newark have asthma.

Her remarks on power plants was a reference to the controversy surrounding plans for an 84-megawatt power plant in Newark’s East Ward; it would be the neighborhood’s fourth methane gas-fired power plant. In January, Governor Phil Murphy ordered an environmental review of the proposed plant, which Jersey City, Hoboken, Newark, and Livingston’s governing bodies all have opposed.