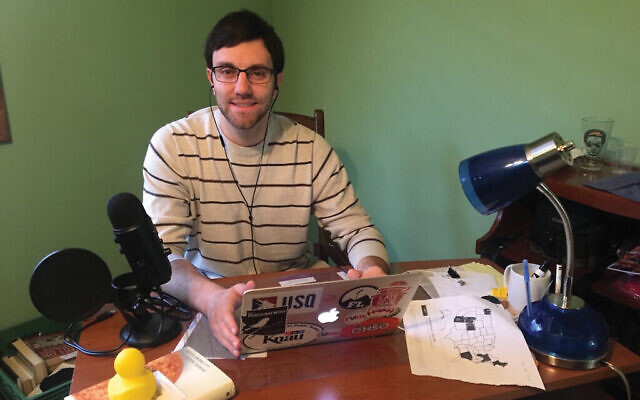 In August 2018, Justin Regan got in his car and hit the open road for four months. The 27-year-old was on the hunt for rabbis — specifically, to interview one in every American state.

A former host and reporter for local public radio in Flagstaff, Ariz., Regan has compiled his illuminating conversations into a podcast titled, “American Rabbi Project.” His initial 14,000-mile trip yielded interviews with 16 rabbis, and he plans to continue the project with more excursions until the effort is complete.

Unfortunately the coronavirus pandemic has thrown a wrench into the works, and Regan is currently stuck at home in Los Angeles. Meanwhile, he’s using his time in isolation to turn material already recorded into new episodes, including a “behind the scenes” one.

“I’m committed to seeing this through,” Regan told The Times of Israel. “I plan to do all the interviews in person and reach Jewish communities all over the country, including in Alaska and Hawaii.”

Regan doesn’t just do the reporting for the free podcast, but also singlehandedly writes and produces it. He is focusing only on this, forgoing other employment opportunities for now. (He is, however, seeking support through a crowdfunding campaign.)

The project evolved as Regan met more rabbis and visited more communities, some of them in off-the-beaten-track or historical locations. He managed to visit three of the country’s five synagogues that predate U.S. independence — in Philadelphia; Savannah, Ga.; and Charleston, S.C.

Regan expected the interviews to focus on subjects such as assimilation, interfaith marriage, increased anti-Semitism, and American-Jewish exceptionalism. These topics were covered, but in response to the open-ended questions posed by Regan, the rabbis enriched the conversations with additional insights.

“I learned more and more as I went on and built on themes from one rabbi to another,” he said.

Among the subjects added into the mix were local Jewish history, the Jewish LGBTQ experience, as well as the cultural diversity within the American-Jewish community, of which Regan said he had not been previously aware.

“When Justin reached out, I was impressed with the narrative history that he was trying to create for listeners. As one of the few rabbis in West Virginia, I am often asked to talk about the American-Jewish experience found both in small communities and our unique area in Appalachia. Justin’s podcast seemed both natural and praiseworthy,” said Rabbi Victor Urecki of B’nai Jacob Synagogue in Charleston, W. Va.

Although Regan set out in search of rabbis with different stories to tell, he was also in many ways on a personal journey of Jewish identity. Born and raised in the Los Angeles area in an interfaith family headed by an Ashkenazi Jewish mother and Irish-Italian Catholic father, Regan grew up in a relatively secular environment.

With the project, he said, “I’m getting the pulse of how various and wide the community is and of the different ways there are to express Jewishness. It’s giving me the opportunity to decide what I connect to.”

This article originally appeared in The Times of Israel.