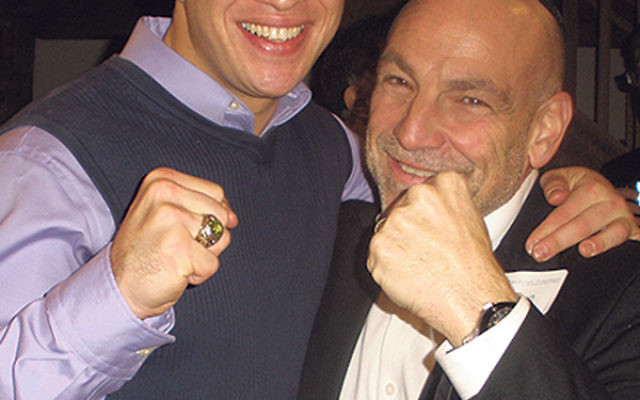 The current World Boxing Council United States Junior Middleweight champion, who donates all his prize winnings to spinal cord research, is many things: the grandson of Holocaust survivors, a West Point graduate who remains a captain in the Army reserves, and the founder of Team Fight to Walk.

On Dec. 7, at Baker’s Farm in East Brunswick, he spoke of his “passion” to an audience of health care professionals belonging to the Maimonides Society of the Jewish Federation in the Heart of New Jersey.

A four-time Army boxing champion and world military gold medalist who was inducted into the National Jewish Sports Hall of Fame in 2013, Melson proudly wears a star of David on his trunks in the ring.

But, he said, he would have retired from the sport long ago if not for his commitment to seeing those now confined to wheelchairs for the rest of their lives someday be able to walk.

“I would like it if every sports figure would donate one day of their salary” to that cause, said Melson, who was accompanied to the event by his Israeli-born mother, Annette, a former U.S. Army nurse. In his day job, Melson sells medical equipment.

“I don’t know why I’ve made the choices in my life, but I don’t have time to waste figuring it out,” said Melson. He recalled how as a five-year-old walking on the streets of Manhattan with his mother he would cover his eyes, telling her, “It hurts my eyes to see the homeless people.”

Noting “my choices make me happy,” Melson said he became involved in the spinal cord issue after meeting a young woman, Christan Zaccagnino, who was confined to a wheelchair at age 10 after a diving accident. She would later become his girlfriend.

Although the pair broke up after five years, she helped him found Team Fight to Walk. “We will always be connected,” he said.

He also fights for “my brothers and sisters” who became quadriplegics and paraplegics on the battlefields of Afghanistan and Iraq. While traumatic brain injuries make up 57 percent of all chronic battlefield wounds, Melson said, too little is being done for the 2 percent who come back with spinal cord injuries.

“It’s almost as if I wish they would put something in little fine print for our soldiers saying, ‘If you get paralyzed we’re not going to do anything to help you. Do you still want to enlist?’”

(In 2009, Congress established a Spinal Cord Injury Research Program at the Department of Defense with a $35 million appropriation. Appropriations through 2015 totaled more than $157 million.)

Team Fight to Walk has partnered with Dr. Wise Young, founding director of the W.M. Keck Center for Collaborative Neuroscience at Rutgers University, who is conducting cutting-edge stem-cell research into spinal cord injury.

Host committee member Dr. Steven Reich of East Brunswick addressed the gathering. An orthopedic surgeon, he served as chair of the NJ Commission on Spinal Cord Research and is founding president of the NJ Spine Society. He said that more than 80 percent of the approximately 12,000 spinal cord injuries annually in the United States involve young males.

As he ages, Melson said that injuries have prevented him “from boxing the way I want,” but they pale in comparison to being “trapped inside your body.”

The boxer, who is in talks for a reality television show about him and his cause, said he sometimes lies in bed and imagines what it means to be paralyzed.

“I want to experience what a person going through this would, waiting for someone to come and pick them up or to catheterize them,” he said. “I have these legs, and I need to appreciate having these legs because I may not have them tomorrow.”