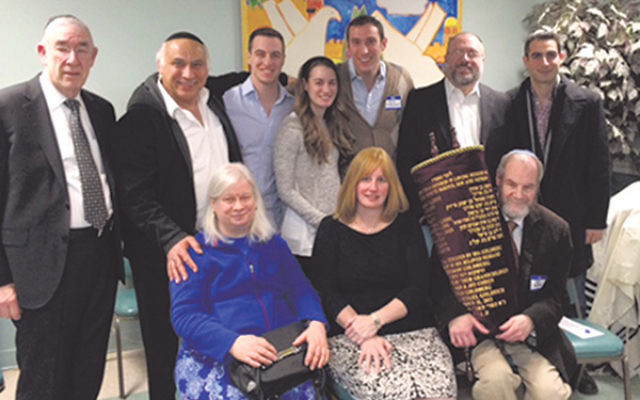 For the Goldberg, Goldrich, and Cohen families, it seemed like another Hanukka miracle when David Goldrich celebrated his upcoming wedding by reading from a family Torah scroll lost for decades.

Commissioned for a Paterson yeshiva in 1926 by David’s great-grandmother, the scroll made its way to a northern New Jersey day school before its caretakers lost track of it.

But thanks to some detective work by the gabbai of a tiny congregation at a Paterson home for seniors, the Torah scroll made it back into the family’s hands in time for the Dec. 12 ceremony at Young Israel of East Brunswick, on the sixth day of Hanukka.

“That was the first time in 90 years a member of our family was able to use it, to layn from it, to celebrate an aufruf,” said David’s uncle, Gershon Goldberg of Parsippany. “It was very emotional. We’re very proud he was able to use it in this way. I’m sure our whole family felt this way.”

David’s great-grandmother, Chaya “Ida” Goldberg, commissioned the scroll in memory of her recently deceased husband — also named Gershon — a silk weaver from Bialystok, Poland, who settled in Paterson in 1900 because of its reputation as “the silk capital of America.” He became manager of a silk mill.

There the couple became active in Jewish life. After Gershon’s death, Ida, although supporting five sons, felt it was important to dedicate the Torah scroll in his memory.

“It must have been hard for her to do as an immigrant with five sons, who barely spoke English,” said Judy Goldrich of East Brunswick of her grandmother.

The scroll went to the local talmud Torah for immigrant children, which eventually merged with Yavneh Academy in about 1950, and the scroll was moved to the day school. There Ida and Gershon’s son, David I. Goldberg — who was just nine when his father died and for whom David Goldrich is named — became active, serving as its president in the 1970s.

David, the father of Judy, Gershon, and their sister, Sharon Cohen of Fair Lawn, “kept an eye” on the Torah, said Judy, who recalled seeing the scroll herself while a student at Yavneh.

She also remembered as a second-grader watching the construction of Jewish senior housing across the street from the school. “It was about 1971, and they thought the apartments would anchor Jewish life in Paterson,” said Judy. She recalled walking over with her classmates to share holiday celebrations, perform plays, and sing for residents of the Federation Apartments, now a beneficiary of the Jewish Federation of Northern New Jersey.

“We had a strong association with the senior citzen building that ended when Yavneh moved to Paramus in 1981, which essentially ended Jewish life in Paterson,” said Judy.

David Goldberg had died a year before the day school moved, and between his death and the move, the family lost track of the family Torah scroll. They assumed it had gone with Yavneh to Bergen County, but the school had no knowledge of its whereabouts. Years of inquiries proved fruitless.

The fate of the Torah was so important to David’s widow, Florence, that she begged her three children just before her death in 2009 to keep looking for the scroll.

“I tried contacting a friend of mine who at the time, in 2009, was president of Yavneh,” said Gershon. “He had no idea where it was. Yavneh had no record either. It just disappeared.”

The family had all but given up when they got a call from Jerry Schranz of Fair Lawn, who serves as gabbai of a minyan, affectionately known as the Paterson Shul (patersonshul.com), which meets twice monthly on Shabbat mornings and holidays in the senior apartments’ basement. Eight men and two women, all seniors, regularly attend the “Orthodox-style” shul, joined by others who walk across the Broadway Bridge from Fair Lawn to ensure there is always a minyan.

Schranz noticed its two Torah scrolls had worn with age. The letters had become difficult to read, the parchments had frayed, and even the wooden rollers had cracked, rendering the scrolls pasul, or unkosher.

“It occurred to me I should contact a sofer [scribe] to get them up to halachic standards,” Schranz told NJJN. “While the sofer was repairing the physical damage, I wanted to find out where these Torahs came from.”

He noticed the name Goldberg had been scratched into the wooden rollers of one Torah and set out to locate its donor family as well as the donor of the other scroll. Schranz called people up and down the East Coast following leads, successfully locating both families.

“When I called [the Goldbergs], they were shocked; it was as if I had found a lost child,” he said. “They were almost in tears. It was hard for them to explain until I met them, and then I was almost in tears when I heard the story.”

Schranz said he now feels like “the guardian of these Torahs,” adding, “I feel like I’m repairing a little bit of history.” He launched a fund-raising campaign to pay the sofer, Rephael Hirsch of Fair Lawn, with enough left over to buy needed extras for the shul, including new prayer shawls and arm rests for the chairs.

On Nov. 29 the two scrolls were dedicated and reunited, with several hundred descendants of their donors and their friends in attendance. A new cover, reading “Beit Knesset Paterson,” the Paterson shul, now lists Goldberg family members' names.

Although family members may borrow the scroll for special occasions, Judy said, she and her siblings decided “it was the right thing to do to allow the Torah to continue to be used by the last vestige of Jewish life in Paterson.”

“My family owes a great deal of debt to Jerry and this minyan,” said Judy. “If they hadn't fought to maintain this minyan for 35 years, I shudder to think what would have happened to this Torah. It probably would have been buried with all kinds of ritual items, and we would have never seen it again.”

David Goldrich and Samara Dennis are to be married on Dec. 27 in Hollywood, Fla.

Seeing her son read from it at his aufruf, Judy said, she couldn't help but think, “Hanukka is a time of miracles, and we feel this is a family miracle, and really a community miracle.”