Avi and Becky Katz of Teaneck have donated $3 million to NCSY, the flagship youth movement of the Orthodox Union. The youth group – its former name is the National Conference of Synagogue Youth — works to support Jewish identity programs for public school teenagers.

The Katz’s gift will go toward expanding and strengthening the OU’s 19-year-old Jewish Student Union, a network of more than 300 extracurricular clubs in public high schools across 21 states and four Canadian provinces. JSU’s 100 staffers bring Jewish culture and learning opportunities to more than 12,000 teens annually. More than 20 JSUs function in New Jersey alone.

“We feel strongly about the need to connect future Jewish leaders to their heritage and culture, and to the larger community in its most profound sense,” Mr. Katz said.

“So many things are polarizing people now, and the need for community has never been greater. We found that particularly amidst the issue of anti-Semitism; students we’ve spoken to can really feel alone. We’re cognizant of the fact that it’s difficult in the dizzying world out there to create meaningful relationships, and we look at the JSU platform as an incredible mechanism for creating those relationships.”

The Katz Family Initiative includes the creation of a new position of national director of JSU. This will be filled by Devora Simon, who’s now the director of the Silicon Valley NCSY/JSU chapter. In addition, the Katz Initiative funds distinct programmatic strategies to increase the impact of JSU by improving retention and transition to other Jewish programs.

“Part of our goal is to really look in a bespoke way at small, medium, and large communities and bring initiatives that will be most impactful in each,” Mr. Katz said.

“We will try different things to see what works best. What works in Kansas may not work in New York, and vice versa. It needs to be tailored in a thoughtful way, and Devora Simon is very thoughtful in approaching this and working with NCSY staff to tailor the experiences,” he said, adding that the organization strives to help Jewish teens “find something that speaks to them and help them pursue it, not to shove anything down anyone’s throat.”

Mr. Katz, CEO of Agam Capital and chairman of the OU’s board of governors, was chairman of NCSY from 2014 to 2020. Two years ago, under his guidance, NCSY worked with the Orthodox Union’s Center for Communal Research to study how JSU could make a more substantial impact. The conclusions pointed to a need for increased staffing and staff training, and to the potential benefits of nurturing connections among student leaders.

Accordingly, the Katzes’ donation will help launch the JSU Teen Leadership program, where club presidents will work together virtually and gather for a planned two-day conference. 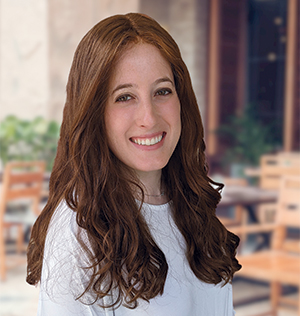 “Sometimes the challenge is to take a great idea and build it from scratch. Here we saw an opportunity to scale an amazing existing platform,” Mr. Katz said.

The Katzes have lived in Teaneck for 21 years. They have four children, who range in age from 14 to 23.

Ms. Katz credits her mother, Lois Grossman, with modeling “a passion for helping Jewish people feel closer to Hashem and enjoy being Jewish.” She recalls her mother often inviting Jewish strangers for Shabbat meals in their Woodmere, Long Island, home.

When she accompanied Ma’ayanot and public high school students on an NCSY humanitarian mission to New Orleans, she was struck by “the mutual respect and appreciation” for participants’ different approaches to Judaism, as well as “the potential impact of introducing public school students to their Jewish heritage.”

She and her husband “see how many kids are out there who can benefit from JSU” she said. “Avi got involved in NCSY as a lay leader, and over many years that became more resonant with him as a way to give people a connection to their heritage.”

Over the summer, the Katzes met with Ms. Simon and NCSY’s international director, Rabbi Micah Greenland, to assess the performance and impact of JSU over the past 19 years and to formulate plans for new programs to pilot in the coming school year.

“It was such a vibrant back and forth, and we will continue collaborating, tweaking, and evaluating,” Ms. Katz said.

She looks forward to visiting JSUs in the area and especially to being involved in the JSU Teen Leadership program.

“We’re extremely thankful to Becky and Avi Katz for everything they do, whether it’s opening their home to our programs, helping us to better our NCSY program, and perhaps most notably in this moment, leading from the front and making this tremendous investment in the Jewish future,” the OU’s president, Moishe Bane, said.

“Big ideas like this JSU investment build on NCSY’s leadership role in the community in Jewish identity-building and connection to Israel, for the upcoming generation of American Jewry,” Rabbi Greenland added. “This gift from Becky and Avi leverages all of those organizational strengths to make a meaningful additional impact on the lives of tens of thousands of Jewish public high school students.”

Asked to pinpoint the biggest challenge facing Jewish teenagers today, Mr. Katz replied, “Connecting with themselves, their goals, and mission in life. The absence of that leads to disconnect, concern, and anxiety. Every individual has a purpose, and we hope to empower our future leaders to find their unique mission and path in life, each in their own time and place.”