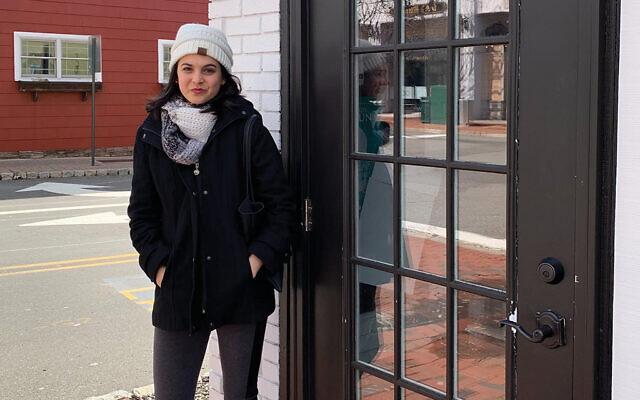 Gabi Faye, 29, of South Orange, has a lofty goal: to raise $40 million by October. That’s the estimated cost to turn her cousin Leo Bretholz’s 1998 Holocaust memoir, “Leap into Darkness,” into a film.

Faye, co-founder of Andromeda Films, is well aware that $40 million is a breathtaking sum. But she is ambitious, undaunted, and a fighter, a trait she likes to think she shares with her cousin.

“It is a big undertaking but I kind of feel like, you know, we’re given one life and if we don’t go for it and try, we’ll never know what we can create and what we can make happen,” she said.

Speaking with NJJN on a Thursday morning toward the end of February at The Order, a café in South Orange, over chamomile tea with lavender, hold the cookie, Faye remembers the first time she met her cousin. She was a middle school student at an Orthodox Jewish day school in Baltimore where Bretholz was speaking about his experiences during the Holocaust. Faye said she was “very, very captivated by him.”

“I remember just listening to his story and just being horrified by it,” she said. “I couldn’t understand how that could really happen to someone.”

Bretholz was a distant cousin — his wife was Faye’s grandmother’s cousin — but they developed a warm relationship. She keeps a photo of them together from the day he came to watch her perform in a high school production of “Hairspray,” Faye in full costume.

A child in Vienna when the Nazis invaded, Bretholz left his family and stayed just ahead of the Nazis and their collaborators, slipping away again and again —  swimming across a river; squeezing through iron bars on a train headed for Auschwitz; crawling under barbed wire; jumping out of a courtroom window; hiding in a monastery, an attic, a mountain village, a marsh, a barn, a cemetery, and sometimes in the homes of distant cousins — until the war ended. Eventually he made his way to Baltimore, where he ran bookstores. He died in his sleep in 2014.

“For someone who went through such a hell, that’s such a good way to go,” she said.

Faye and her partner at Andromeda, Cameron Ring, have six films on deck, waiting to be made. Most have smaller budgets, and she has few illusions about the challenges “Leap into Darkness” presents, and the cost is only the beginning. She envisions filming in Baltimore but also hopes to shoot in various locations around Europe. A war-time film would involve weapons training and stunts, and  props and sets from the era add further complications. It could take months to get all the pieces in place and a few more to shoot, and then maybe a year to edit. And she has a one-year option on the screenplay that ends in October; if she hasn’t raised the money and started production by then, the screenwriter can pull the project from Andromeda.

“Leap into Darkness” would be the first of her films with a distinctly Jewish focus, and there’s a bashert quality to the screenplay falling into her lap: The screenwriter, Baltimore journalist Michael Olesker (who also co-authored the book), offered it to Andromeda without knowing Faye and Bretholz were related.

The film is personal for her, and not just because Bretholz is family. “Judaism is a big part of my life,” she told NJJN. “This film is preserving Jewish history through telling my family’s story at a time when there’s a lot of haters [and] a lot of people trying to disprove all the struggles that humanity, and especially the Jewish people, have gone through.”

Faye would prefer to hire a foreign cinematographer because she says they often have a “raw” and “intimate” approach that’s “better at capturing human emotion” than the more “polished” American style.

She grows excited as she articulates how she would take on this scene or that, and it continues as she conveys her admiration for the visual quality of the book and screenplay. For example, Faye envisions a scene in which Bretholz sees what appears to be some kind of light show off in the distance one evening, not realizing he is watching the fires that burned on Kristallnacht.

“The characters are in awe. They can’t make out what it is,” Faye said. “You know, it’s something they’ve never seen before, all these lights and colors in the sky. They’re almost taken out of their reality, the horror that they’re going through, [when] they see this, this beautiful sight in the sky.”

A native of Baltimore and a 2012 graduate of Rider University, Faye has a growing resume in both acting and production. She has written and executive produced several of her own short films, including “Dirty Girl,” about sexual assault in the age of #MeToo, and “Stripped,” about a pole dancer who lands in jail having taken the fall for someone else. She has served as a producer, associate producer, and producer’s assistant on a variety of projects, including a new TV pilot “Crimson City,” “Retaliators,” a horror film due out later this year, and “Love and Communication,” a film about autism. (After our interview Faye was off to film “Mare of Easttown,” a limited HBO series starring Kate Winslet, in which Faye has a small recurring role.)

An outspoken feminist, Faye left the Orthodox community in part because of its positions on women, though she remains tied to the Jewish community. She sings in a Zamir Choral Foundation choir, which she started doing in high school with HaZamir: The International Jewish Teen Choir, and she teaches Hebrew school at three N.J. synagogues.

Back in her yeshiva days, she said, a rabbi had inappropriate physical contact with her, and she said she’s endured similar experiences throughout her life. One of the reasons she was keen to start Andromeda, Faye said, is that she’d had enough of being objectified and wants to be able to control the experience on set for women. “I don’t want any toxic energy on my sets.”

And she likes to stir the pot: An avid recreational pole dancer, she seems to enjoy it as much for the artistry and workout as for the reactions it elicits. “I love to do things that people don’t expect,” she said. “People think, ‘Oh, that’s naughty. That’s like a stripper [thing],’ and I’m like, ‘No, it’s empowering and I love it.’”

She believes in making her own luck. When she first moved to New York City in 2015 she wasn’t making the kind of inroads in the industry she had hoped for. But she “figured it all out as I went along,” Faye said. “I taught myself kind of all the nitty gritty parts of being a producer.” After that, she started landing jobs in the production field. Now she never worries about failing in the industry. After all, she says, “I’m in it.”