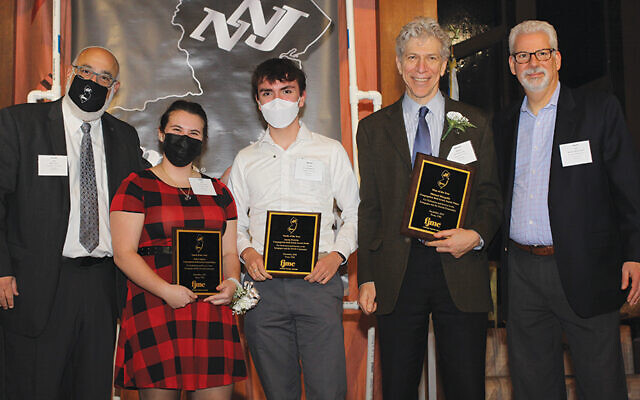 Dr. Michael Margolin, Aaron Perotta, and Abbie Sapira, members of Congregation Beth Israel in Scotch Plains, were honored as “Man of the Year” and “Youths of the Year” at the Northern New Jersey Region of the Federation of Jewish Men’s Clubs dinner, held at Temple Beth Ahm Yisrael in Springfield on December 19.

Dr. Margolin of Westfield is a past president of CBI’s men’s club and a long-time synagogue volunteer. Aaron Perrotta and Abbie Sapira are juniors at Scotch Plains-Fanwood High School; both teens give their time in support of Congregation Beth Israel.

Jonathan Jaffe, Congregation Beth Israel’s men’s club president, said the selection committee chose this year’s honorees because of their ongoing commitment to the Jewish community in the Scotch Plains area.

“We were pleased to honor three exceptional individuals within our synagogue community,” he said. “Dr. Margolin has been a long-time leader of our men’s club, which has benefitted from his terrific leadership. Meanwhile, Aaron and Abbie are among the youth at CBI who have shown a commitment to the religious school and Jewish learning over the years, as well as have been involved in numerous volunteer activities. We are honored that we could recognize these three individuals this year, all of whom are our shining stars.”

The Federation of Jewish Men’s Clubs presents awards annually to recognize volunteers who have been active leaders within their communities. Congregation Beth Israel is affiliated with the United Synagogue for Conservative Judaism and has an active men’s club and youth program. For synagogue information, call (908) 889-1830.