Presidents and those who cover them have, especially in recent years, often had contentious relationships. More broadly, journalism as a whole is frequently perceived as focused on scandal, real or imagined, and as seeking primarily to expose and embarrass.

My aunt, Trude B. Feldman, who passed away last week at the age of 97, devoted her fascinating life to a different vision of what a White House correspondent could be. Trudy, as she was widely known, interviewed every American president from Lyndon Johnson to George W. Bush, in addition to most of the contemporaneous vice presidents, secretaries of state, Israeli prime ministers (going back to Ben-Gurion), Harry S. Truman in his post presidential years, and Anwar Sadat, as well as other Arab leaders.

Trudy believed that a journalist could generate a positive connection with her subjects, and in doing so encourage them to put forward their best selves. Being that her subjects were leaders of nations, formers of policy, influencers of the path of history, Trudy’s aspirational approach was her contribution to the betterment of the world, a targeted effort to leverage the better angels of humanity’s most prominent figures.

Her path was neither pollyannish nor naïve, but intelligently idealistic. It is true that superficially, her generosity towards her subjects could invite mockery; she was lampooned by Robin Williams on “Saturday Night Live” in 1988. (Williams’ Ronald Reagan, battered at a hostile press conference, is told through his earpiece to call on “Trudy”; when he does, she asks, “Mr. President, this may seem like a lob…but what would you like to talk about?”)

The joke, however, was on everyone else. Paired with her signature persistence, her style more often elicited not puff but profundity, more sincerity than sugar. The unique access she earned — baffling to some, understood to the astute, acknowledged by all — yielded memorable results.

One notable example was Bill Clinton granting Trudy his first post-apology interview, in which he mused, as recorded in the Washington Post in September 1998, “What has really been helpful to me in the last several months, and particularly in the last few weeks, is religious guidance that I have been given about atonement from the Yom Kippur liturgy, to remind me that while it is unusual for the president to be in a public situation like this, the fundamental truth is that the human condition — with its frailties and propensity to sin — is something I do share with others.”

Press secretary Mike McCurry said that the exchange was “more enlightening than most interviews with Bill Clinton.” When the space shuttle Challenger disintegrated on Jan. 28, 1986, Ronald Reagan postponed his State of the Union speech scheduled for that evening, but not his interview with Trudy that afternoon. Similarly, Reagan, Jimmy Carter, and George H. W. Bush granted Trudy their final interviews as they were leaving office. 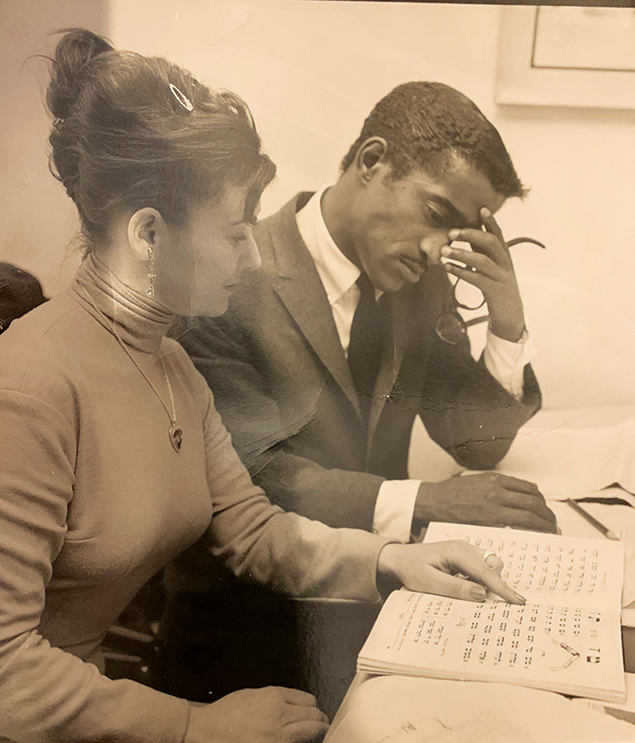 Trudy never had children of her own, but she bore a great love for her eight siblings and their families, and she was a cherished presence in their homes and at their life-cycle events.

When I was 9 or 10 years old, I was injured by a flying projectile at a birthday party. As I was being bandaged at the doctor’s office, I commented admiringly to my parents about President Reagan’s good humor following his then-recent assassination attempt, when he remarked to his wife, “Nancy, I forgot to duck.” A few days later, a manila envelope arrived at my house. Inside was a large portrait of the president, with an inscription: “To Daniel — I hear you, too, forgot to duck! I hope you’re much better now. Ronald Reagan.”

The sister, daughter, and granddaughter of rabbis, Trudy’s Jewish identity was central to her mission and her message. In her youth, she was a Hebrew teacher in the Jewish Educational Center of Elizabeth, and Dr. Rivkah Teitz Blau recalls her “winning personality” and her “inquisitive” nature, which served her well in her later profession. She continued her teaching and outreach in more unusual venues in later years, including teaching Hebrew to celebrity converts such as Sammy Davis, Jr. and Elizabeth Taylor.

Trudy began her journalistic career covering all 122 sessions of the Adolf Eichmann trial in Israel. Over a two-year stay in the Holy Land at that time, she also had a bit part in the movie “Exodus,” attended weekly Bible sessions with David Ben-Gurion, and toured the country with Harry Belafonte and then with Eleanor Roosevelt, who told her, “Israel is a lesson in how one can develop a nation…. Out of the sands, the people have carved a wonderful, fruitful existence.”

Her deep love and concern for Israel can be seen in her interviews both with American presidents and their cabinets, and with Israeli premiers. More surprisingly, she could elicit welcome gestures toward Israel from Arab leaders as well, and in her personal interactions evoked warm reactions from figures such as Anwar Sadat and King Hussein of Jordan. She somehow managed to portray the perennial conflict in the Middle East not as an intractable endless clash, but as a hopeful, transient situation with productive efforts on both sides, and somehow, at least in the moment, it resonated.

In parshat Mishpatim, the portion read the week following Trudy’s passing, the Torah commands “lo tisa shema shav” (Ex. 23:1). It is a difficult passage to translate; together with talmudic interpretation (Pesachim 118a), it can be rendered, “do not accept, or transmit, a negative report that is false, or purposeless.” Trudy envisioned a style of reporting that could be at once purposeful, positive, and perceptive; that she could be neither a shark nor a shill, but shine a light, and help her subject walk toward it.

According to a 1998 Washington Post column by Howard Kurtz, despite the fact that Trudy “repeatedly scooped her better-known rivals” she was “humble and bashful” and “wanted to stay out of the limelight” and let her work “speak for itself.” Now that she is no longer physically with us, her work must indeed speak for itself. And when it does speak to all of us, telling us, perhaps, that we are just a bit better than we think we are, maybe, in keeping with her wishes, we will listen.

Daniel Z. Feldman of Teaneck, the rabbi of that town’s Ohr Saadya, is a rosh yeshiva at Yeshiva University’s RIETS and an instructor at the YU’s Sy Syms School of Business there. He has written three books in English, most recently “False Facts and True Rumors: Lashon Hara in Contemporary Culture,”; and six, in Hebrew, of essays on the Talmud.

Daniel Z. Feldman of Teaneck, the rabbi of that town’s Ohr Saadya, is a rosh yeshiva at Yeshiva University’s RIETS and an instructor at the YU’s Sy Syms School of Business there. He has written three books in English, most recently “False Facts and True Rumors: Lashon Hara in Contemporary Culture,”; and six, in Hebrew, of essays on the Talmud.