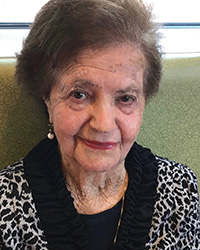 Irene Yiddis Steinhardt Goldberg (Lefkowitz) of West Orange died April 12, 2020. She was born in 1925 in Kiralyhelmec, Czechoslovakia. She was a Holocaust survivor who survived the Auschwitz, Bergen-Belsen, and Dachau concentration camps as well as a prisoner death march. She lived in Queens prior to moving to New Jersey seven years ago.

Mrs. Goldberg was a member of Torath Emeth synagogue in Kew Garden Hills, Queens, for over 60 years.

Private services were held April 13 at Cedar Park Cemetery, Paramus. Memorial contributions may be made to the Margulies Senior Center at JCC MetroWest, West Orange.