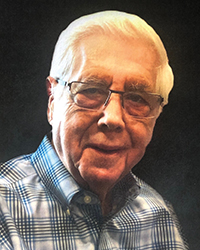 Mr. Hoffer founded Hudson Quilting Company and subsequently was employed by Channel Home Centers, initially as an assistant lumber buyer before eventually rising to the position of vice president of operations, overseeing 89 locations in nine states.

He graduated from New York University School of Business.

He served in the U.S. Navy.

He was a past president of Congregation Beth Ahm of Verona, where he was actively involved for many years.

He enjoyed public speaking and gardening.

He is survived by his wife of 66 years, Barbara (“Cookie”); his son, Larry (Janet); his daughter, Marcy (Robby) Berkowitz; a sister, Edie Dickes of Boca Raton, Fla.; a brother, David of Deerfield Beach, Fla.; and five grandchildren.

Private services were held April 20. Memorial contributions may be made to B’nai Shalom, West Orange, or Michael J. Fox Foundation for Parkinson’s Research.