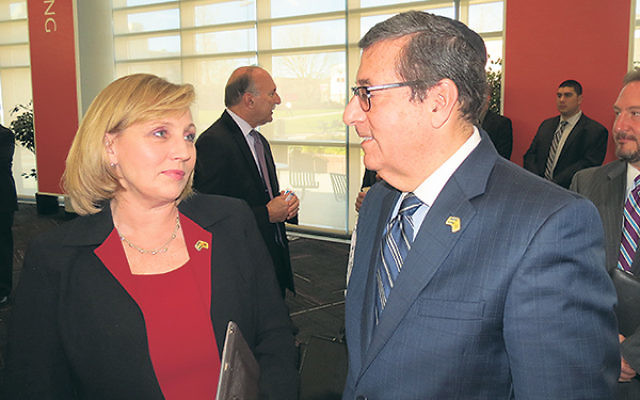 Mark Levenson, chair of the New Jersey-Israel Commission, chatting with Lt. Gov. Kim Guadagno prior to the meeting at NJIT.

Counterterrorism and security issues shared the spotlight with talk of Israel’s economic challenges at a Dec. 15 meeting of the New Jersey-Israel Commission.

Israeli Deputy Consul General Amir Sagie shifted the focus of the two-hour meeting away from the planned topic, education and innovation, in order to address the “new threats” facing Israel.

“Israel is in a very good situation but we are in a very bad neighborhood, which is getting worse by the hour,” said Sagie, in remarks at the New Jersey Institute of Technology in Newark. “The situation in the Middle East is deteriorating, and century-old borders have collapsed, and the Middle East is no longer what it used to be. We don’t have any more viable states around us. States are collapsing.”

Sagie said the strengthening of ISIS in Syria, Lebanon, and the Sinai Peninsula demands new strategic thinking. “The tanks and F-16s we have are not capable of protecting us from those new threats, mostly rockets and missiles and terrorists,” he said.

But, he said, the threats from ISIS, radical Islam, and an assertive Iran may create new cooperation between Israel and some of its Arab neighbors, including Saudi Arabia and other Gulf states. “They see the threat of Iranian hegemony and Iran’s acquiring nuclear capabilities as the number one threat for them as well, and they are willing to cooperate with Israel — maybe not openly right now, but in the future,” he said.

Christopher Rodriguez, director of New Jersey’s Office of Homeland Security, said that in 2015, five of the 58 ISIS-related arrests in the United States occurred in New Jersey. He said there are currently 900 ISIS-related investigations going on in the country.

“Over the past 18 months [ISIS-inspired terrorism] has metastasized into a very decentralized and diffused threat,” said Rodriguez, “making it more difficult at the local level to detect and deter the kinds of attacks we have seen in Paris and San Bernardino.”

But, Rodriguez said, “the public should rest assured that the state is engaged and is poised to defend any types of threats that may come up.”

But Dan Ben-David, president of the Israeli-based Shoresh Institute for Socioeconomic Research, warned that “income and education gaps within Israel are among the highest in the developed world.”

Ben-David said Israel has replaced the U.S. as the number one Western nation in terms of economic inequality.

“Ever since the mid-1970s we have been falling further behind” in productivity, he said. Aside from Israel’s “phenomenal” high-tech sphere, “there is another Israel that is not getting either the tools or conditions to work in a modern economy that is huge, and it is growing.”

He said its problems are caused largely by severe unemployment and under-education in two distinct populations: the fervently Orthodox men and Arab women. “These are two poor communities that are getting poorer, and yet we tend to blame everything on them,” when the real blame lies in the lack of secular education in both worlds.

Welcoming those attending the program, Lt. Gov. Kim Guadagno said the partnerships between Israeli and NJ businesses “make us family, not just friends.” She urged the Americans and the Israelis in the room “to collaborate. If you are innovative, you will create real jobs.”