Abe Foxman, who retired as the head of the ADL, talks about his experiences as a child survivor. (All photos courtesy the Claims Conference)

Sticks and stones can break your bones but words can never harm you?

The first part of that inane rhyme is true. Sticks and stones do a great deal of damage to a human body. But so can words.

Words can puncture confidence. They can tell lies. They can mislead and misguide. And they can lay the groundwork, catch the victims, and strip them of their defenses before the sticks and stones are deployed, making them even more dangerous.

Recently, the Conference on Jewish Material Claims Against Germany began a campaign based on that truth, that still-within-living-memory history proves that words can do a great deal of harm.

Abraham Foxman of Bergen County, the retired longtime head of the Anti-Defamation League and a Holocaust survivor, recorded one of the first short videos that the Claims Conferences is distributing as part of its new campaign, #ItStartedWithWords. In the video, he tells a bit of his story. But it’s not only about the Holocaust, he said in a later phone interview. “Words are at the bottom of everything,” Mr. Foxman said. “9/11 didn’t start with boxcutters or planes flying into building, but with ugly words. January 6 didn’t start with someone waking up in the morning and decided to storm the Capitol. Before that there were words. Ugly words. Conspiratorial words. Hateful words. Evil words.

“Because words are so important, if we can use this campaign to communicate to young people that what they say matters, that what they say can make a difference, for good or for evil, then the Shoah will have had an additional legacy.”

Like many potent abstractions, words are inherently morally neutral. “The Jewish tradition teaches us that life and death are in the power of the tongue,” Mr. Foxman said. “Jews who pray three times a day aske the Almighty, three times a day, to keep my mouth from doing evil. On Yom Kippur, when we ask for forgiveness, for atonement, so many of the sins we list are related to what comes out of our mouths.”

Yes, words can be used for evil, “but they can be used for good as well,” he continued. “The reason that evil moved from words to bricks was the absence of good words. No one was there to say no.

“You fight bad speech with good speech, bad words with good words. Anti-Semitism was part of what happened in Germany, but why didn’t people stand up to the Nazis right away? Why didn’t they say no, no, no?”

Words can hurt terribly even if they don’t lead to genocide — by far most of the time they do not. But using hateful words “is what bullying is about,” Mr. Foxman said. “I don’t like you. You are Black or brown or red or green or Jewish or Muslim or whatever. Someone in the group has to stand up and say no. Bullying only scars and hurts because of the absence of people standing up and using words to stop the bully.” 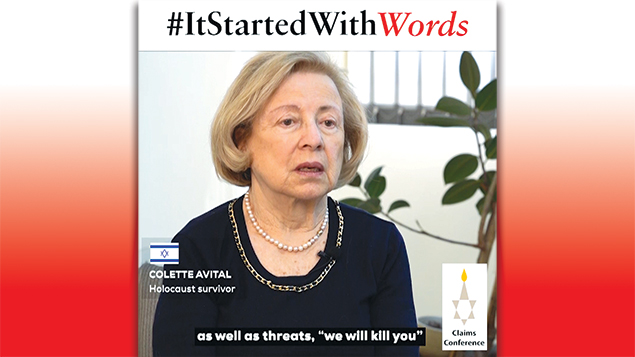 In the videos, Holocaust survivors look at the camera — except for a few filmed in Israel, where widespread vaccination has permitted some softening of the anti-covid regulation, they’ve taped themselves — and talk about their experiences.

Because it’s been 75 years since World War II ended, the survivors making the videos were children during the war. Many of them talk about the traumatic pain that came from the inexplicably harsh, hateful words their former friends and their friends’ parents hurled at them. Even though far worse terror, pain, and loss soon followed those words, the words themselves still sting, all these decades later not cushioned, it seems, by time.

The survivors live in various places — the United States, Canada, the UK, and also Israel, Germany, and other non-English-speaking countries. They speak in their own languages; their videos are subtitled in English. A new one is released every week.

“It’s often hard for younger people to grasp the scope of the Holocaust,” the Claims Conference’s president, Gideon Taylor, said. “As the generations get further and further away, the surveys show that fewer and fewer of them know about it.” According to a survey the conference released last year, “63 percent of all national survey respondents do not know that six million Jews were murdered and 36 percent thought that “two million or fewer Jews” were killed during the Holocaust. Additionally, although there were more than 40,000 camps and ghettos in Europe during the Holocaust, 48 percent of national survey respondents cannot name a single one.”

“It’s very disturbing,” Mr. Taylor said. “It is hard for people to get their heads around it.” Even when people do hear about the scope of the destruction the Nazis and their partners wreaked, it’s hard to make sense of it. What is six million of anything? It’s hard to visualize. The idea of six million dead Jews, many millions more non-Jews, all purposefully murdered, makes no intuitive sense. “But people understand hateful words, racists words. That’s something we see in our community, on television, in our social media.

“That’s why I think this campaign is so powerful,” he said. “It takes something younger people can understand and it explains where it can lead. 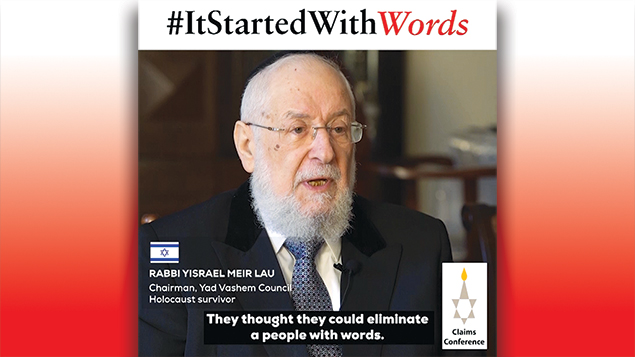 “Holocaust survivors know where words can lead,” Mr. Taylor continued. “We wanted to give them a megaphone, so they can say what they care about, and the lessons they want young people to take away from their words.

“The voices of survivors have a credibility that few others have. They can educate, and make us all aware of where words can lead.”

Although it is true that survivors tend not to be among the savviest and most active of social media users, “they know that their grandchildren and great-grandchildren’s generation are getting most of their information there,” Mr. Taylor said. “They know, both from studies and from their own families, that social media is the way to communicate with that generation. The phone in their hand is the gateway through which a colossal amount of information, both good and bad, flows.”

Symbols change, even the ones we thought so monumental as to be unchangeable, Mr. Taylor added. Auschwitz is a powerful symbol of evil, of hatred turned to ash — but only for as long as people know what it represents. If people forget — if they never learn — then it loses its meaning.

The purpose of #ItStartedWithWords is to keep the symbolism alive by keeping the knowledge of what it means alive in the culture. The purpose is to teach that huge evil grows from smaller malice, that words lead to deeds, “to hear a story from a survivor and stop and think about how it happened,” Mr. Taylor said. “To understand how it started.” To use that understanding to keep it from happening again.