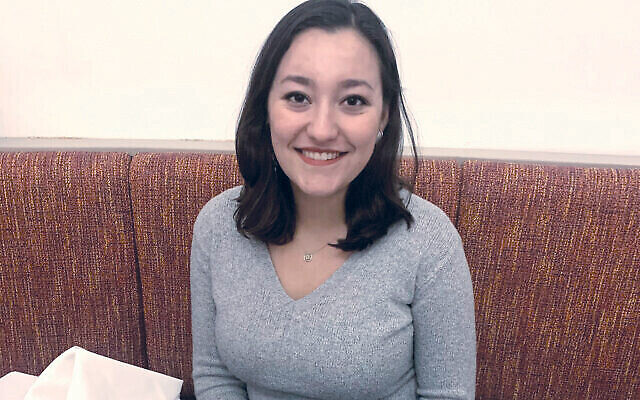 “I guess I wanted to have a space on campus where I felt like I had people that totally related to my experiences,”says Sakura Price, co-founder of J-Asians. Photo Provided by Naomi Hess

Sakura Price ’22 co-founded J-Asians in spring 2019 as a student group for students of both Jewish and Asian heritage.

“I guess I wanted to have a space on campus where I felt like I had people that totally related to my experiences, not just as a Jew or just as an Asian person, but as a Jewish Asian person,” Price said.

Rabbi Ira Dounn, the senior Jewish educator at the CJL, supported the group as they got started.

“We really, at the very core of it, want to make sure that everyone has a place and everyone is comfortable here and can find a home here, period. I think it’s one of our most central priorities,” he said.

A recent study estimates that at least 12-15 percent of American Jews identify as Jews of color. However, the authors recognize that Jews of color are often undercounted. Events such as J-Asians Shabbat are meant to demonstrate the diversity present in Judaism today, on college campuses and beyond.

To plan for the Shabbat, Price and the J-Asians team worked with the CJL chef on a menu. They created posters featuring baby pictures of J-Asians members and ordered chopsticks and customized fortune cookies.

Price invited Arielle Korman, founder of the New York-based Ammud, the Jews of Color Torah Academy, as the guest of honor. Korman spoke during and after the event.

Ben Bograd ’22, another founding member of J-Asians, felt inspired by the way Korman — whose mother, Rabbi Mira Rivera, is the first Filipino-American woman to receive ordination from The Jewish Theological Seminary — sees her intersectional identity.

“She sees herself as fully Jewish and fully Asian and I thought that was a really, really great and poignant idea, like the fact that we don’t need to cut ourselves in half and cut ourselves off from certain communities,” Bograd continued.

Price described how rewarding it was to plan J-Asians Shabbat and get to eat her Shabbat dinner with chopsticks at the CJL.

“That’s how Shabbat works at my house and I’m sure a lot of other Jewish-Asian people, their Jewish holidays are similarly structured, so it was just meaningful to see that normalized and embraced and celebrated at the CJL,” she said.

Previous J-Asians events include a kosher sushi study break and a shaved ice study break. In the future, J-Asians hopes to collaborate with the other Jewish affinity groups on campus, such as J-Lats, a group for students of both Jewish and Latino backgrounds.

Price, Bograd, and the rest of Princeton J-Asians hope that events such as J-Asians Shabbat show the Princeton community that there is more than one way to be Jewish.

“I hope that these affinity Shabbats are a great way for people to see the Jewish community is a far more diverse religious community than plenty of people perceive it to be in their minds,” Bograd said.

Naomi Hess is a sophomore at Princeton University. This piece is part of “The View From Campus” column written by students on campus. If you would like to contribute to it, email lily@jewishweek.org for more info.