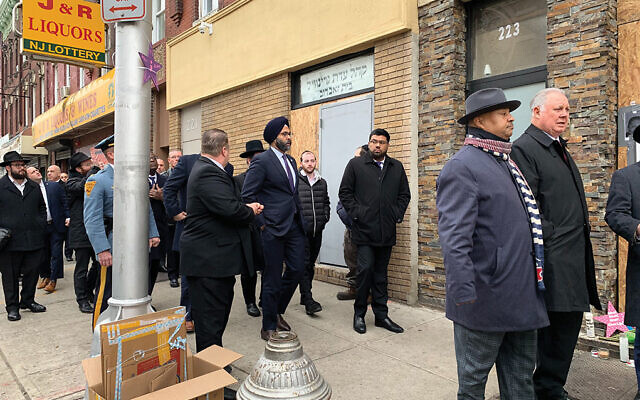 New Jersey Attorney General Gurbir Grewal visited the site of the attack on Monday with other government officials. Photos by Shira Hanau

Jersey City — On Monday morning, African-American and Jewish residents passed one another on Martin Luther King Drive here as they do every other day. Chasidic men in velvet hats exited the Khal Adas Greenville yeshiva with a quick look around to see all was normal. Police cars patrolled the busy street in the Greenville neighborhood.

But next door, the JC Kosher Market, the small kosher grocery that last week was the target of a deadly attack, was unrecognizable, its sign missing, its windows boarded up, and its front step adorned with the wilting flowers and signs of a makeshift memorial to the victims.

At the start of the week after the deadly shooting in which two chasidic Jews, Leah Mindel Ferencz and Moshe Deutsch, and an Ecuadorian immigrant, Miguel Douglas Rodriguez, were shot dead there — in a shooting spree that began with the killing of Jersey City police Det. Joseph Seals — the small Satmar chasidic community that sprouted in Jersey City’s Greenville neighborhood over the last several years is returning to routine, or trying to, amid shivas, appearances by public officials, and inquiries from the press. But as the community moves forward, it is struggling to explain what could have motivated the two shooters to choose Jersey City’s tiny chasidic community and its kosher market as their target.

Benjamin Gottlieb, a chasidic man who moved to Jersey City three years ago from Williamsburg, Brooklyn stood in front of the yeshiva for almost an hour on Monday afternoon. Acting as an unofficial spokesperson for the community there, Gottlieb fielded questions from half a dozen reporters, directing them away from chasidim from out of town who came to Jersey City to make shiva visits and reminding reporters that the community lived peacefully with their neighbors.

A chasidic woman described the neighborhood as “very calm” and devoid of tension as she hurried with her daughter to run her errands. Rabbi Moshe Schapiro, who co-directs Chabad of Hoboken and Jersey City, also tried to dispel the notion, fanned by some on social media, that prior to the shooting there was tension between the Orthodox community and their neighbors.

“We get along with the neighbors; we never have a problem with the neighbors,” said Schapiro at a press conference with government officials in front of the market on Monday afternoon. He called the shooting “an isolated incident” while acknowledging rising anti-Semitism around the world.

“I don’t think it’s connected to the neighborhood,” agreed Shalom, a chasidic man from Brooklyn who works in Jersey City and asked to be identified by his first name only.

Before David Anderson and Francine Graham took four lives in what authorities are calling a hate-fueled domestic terror attack, the Orthodox community in Jersey City was barely known outside of this small city across the Hudson River from Manhattan. About 100 families moved to the area from Brooklyn over the past several years in search of affordable housing. Jewish residents of Greenville insisted that they got along well with their neighbors and still do.

Government officials, including U.S. Special Envoy for Monitoring and Combating Anti-Semitism Elan Carr, New Jersey Attorney General Gurbir Grewal, and N.J. Rep. Josh Gottheimer (D-Dist. 5), stopped by the yeshiva on Monday afternoon and stepped into the ravaged kosher market for a photo opportunity. Chasidim and government officials stood together amid the toppled boxes and shelves of kosher snacks.

People milled around in front of the yeshiva and market afterwards discussing the attack. “I’m a pretty skeptical person in general — I try not to think that the whole world is out to get people,” said a young chasidic man from Crown Heights who works in Jersey City, while standing in front of the yeshiva. “In this case, I see the video footage; if they were just trying to escape somewhere, they could have gone anywhere else. If they just wanted to kill people, there were probably 50 people on the street.” 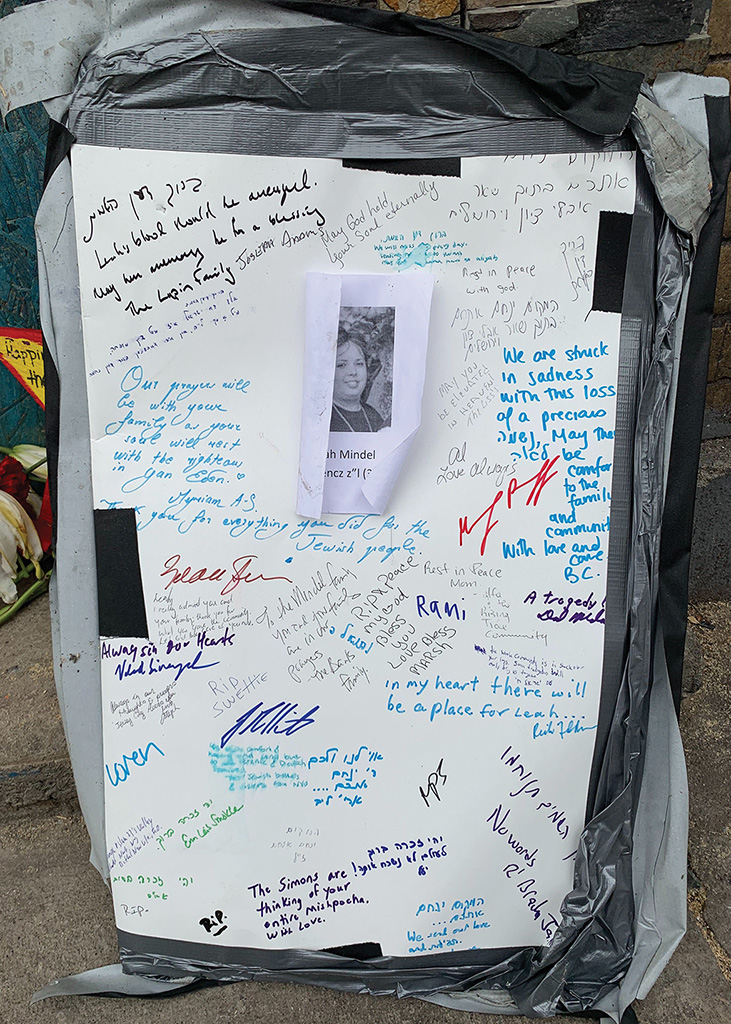 Friends and neighbors left notes in memory of Leah Mindel Ferencz on a poster on the front step of the now-shuttered kosher market.

Anderson and Graham shot and killed a police officer nearby before driving their rented van in a deliberate manner toward the yeshiva and then parking it across the street from the yeshiva entrance. A surveillance video shows one of the shooters emerging from the driver’s side of the van and then marching across the street in the direction of the yeshiva, pointing a rifle. Both shooters then entered the kosher grocery next door, killing the three people inside before being gunned down themselves in an hours-long shootout with police.

“This was obviously anti-Semitism, anti-police,” said Gottlieb, the unofficial spokesperson. “It’s not new, it’s a sickness that the human race has had.”

Law enforcement officials, after hesitating to characterize the attack pending an investigation, now agree. At a press conference two days after the attack, Grewal describe the attack as “potential acts of domestic terrorism fueled both by anti-Semitism and anti-law enforcement beliefs.” Grewal also addressed reports that Graham had ties to a Black Hebrew Israelite group that believes that African-Americans, not Jews, are the true descendants of the ancient Israelites. The attorney general said investigators had not at that time found a clear link between the suspects and any Black Israelite groups.

On Saturday, the owner of a pawnshop was arrested after his phone number was found in the pocket of one of the shooters. He is being investigated for possibly selling weapons to the shooters, who brought several assault rifles to the store and carried a pipe bomb in their van on the day of the attack.

While Jewish residents were unanimous in calling the attack anti-Semitic, some black residents of the neighborhood were less certain. “There’s a lot of pieces missing from the story, like what really happened?” asked one man, who has lived in Jersey City for decades, standing in a group next to the store. Others with him agreed. “It doesn’t sound right; something is not right about that story,” said another man who has lived in Jersey City for his entire life. Both men asked to remain anonymous.

Saying there was more to the story than anti-Semitism, they pointed to some of the unexplained circumstances of the case: how the perpetrators began their rampage by killing Det. Joseph Seals, who approached them in a cemetery; how the shooters were allegedly connected to the homicide of an Uber driver days earlier in nearby Bayonne. Others recalled the shooters telling bystanders on the street, including Jews, to get out of the way, suggesting to them that the shooters were looking for someone in particular. Still others focused on the fact that the pair lived in Elizabeth, about a 30-minute drive from Jersey City.

“The media trying to make this seem like an anti-Semitic thing — that’s the media, it ain’t got nothing to do with people in Jersey City hating Jews,” said the first man. “They ain’t bothering nobody, nobody bothering them.” One man next to him agreed. “They trying to make us blacks against the Jews, it’s not like that,” he said.

A man who lives next door to the store stood in front of his door, now marked with a bullet hole, and recalled Leah Mindel Ferencz, who ran the store with her husband, as a kind woman “who welcomed everybody.”

Another man, who lives a few blocks away and said he did contracting work on the yeshiva when it was first started, said the black and Jewish residents got along well. “They used to give us coffee in the morning when it’s cold out … when they have work they give us work,” he said.

“It is out of character for the neighborhood,” said the owner of a liquor store next door to the yeshiva. “I saw the videos and the photos; I think they were targeted.”