Jonathan Lazarus is at Army Reserve training at Camp Drum in upstate New York during the summer of 1969.

No day is ever wasted on any of us. Not really.

Some are just more impactful than others, some more accomplishment filled, some more contemplative. Days can play out as learning or teaching experiences, or spiritual or religious enlargements. And those days that seem to float by without any tangible results still provide the respite we need to recharge our batteries or simply just to relax.

Then there are days that exceed all the norms. They don’t happen too often, but they’ve happened to all of us. They can be totally unpredictable, turbulent, or joyful, leaving us with feelings both good and bad but rarely ambivalent. They become imprinted in the deepest recesses of our memory, making the imagery more painful or pleasurable, or a combination of both.

When I experienced it or, more accurately, moved through it during 1967, the Newark riots (or rebellion, depending on your viewpoint) had happened only a few months earlier. Twenty-six people died during the five-day dystopia. The city, its residents, and surrounding suburban neighbors would never again view each other in the same light, in terms of perceptions and interactions. A list of long-festering grievances had exploded (or imploded) and left the city prostrate and exhausted. Riddled with political corruption, its schools in shambles, its police force spent, its businesses, investments and human talent taking flight, its housing hollowed out by years of neglect, its arts and cultural scene atrophying, Newark would lose roughly half its population and require a good 40 years before beginning to regain its footing and reclaim its place as the state’s leading metropolis — a process that still is ongoing and far from complete.

I witnessed the riots in real time at the Newark News; I had just joined the copy desk of the Old Gray Lady of Market Street after a stint as a reporter in its Elizabeth bureau. During the height of the disturbances, I would drive in for my shift just before dusk, while things were relatively quiet, and tried to choose a safe parking spot. Once I was in the newsroom, I would be in the thick of reporting and editing during the evening hours, when the destruction and gunfire could be heard outside our fortress-like building. After my tour ended, in the early morning, I would leave cautiously, with security provided by the paper, and I would make sure that my car linked up with a National Guard convoy making its way out of the city. I trailed the trucks closely enough to see the dazed looks on the faces of the Guardsmen, most of whom were my own age, as they sat slumped in rear of the transports. Fortunately, my Army Reserve unit hadn’t been activated, though we were soon to receive close-formation, fixed-bayonet riot training during summer camp.

Looking back, I see that I was truly affected by the riots but not directly in them. I was an unscathed bystander in the city where I had happily spent a decade growing up in the Weequahic section before my family moved to West Orange in 1957, prefiguring by a decade the white flight, heavily Jewish, to the suburbs. But now it was 1967, and in October, three months after the disturbances, I had moved less than a mile across town from the Newark News to the Star-Ledger and I began a nearly 40-year association with the paper. I had correctly sensed that the Newark News was losing touch with its readers (it would fold in 1972) while the Star-Ledger was growing robustly.

One trait the two newspapers shared, though, was that both were woefully unprepared to understand the underlying social, political, and economic causes of the disturbances, and that each paper lacked a deep bench, if they had a bench at all, of minority reporters and editors, a situation that would take years to rectify. 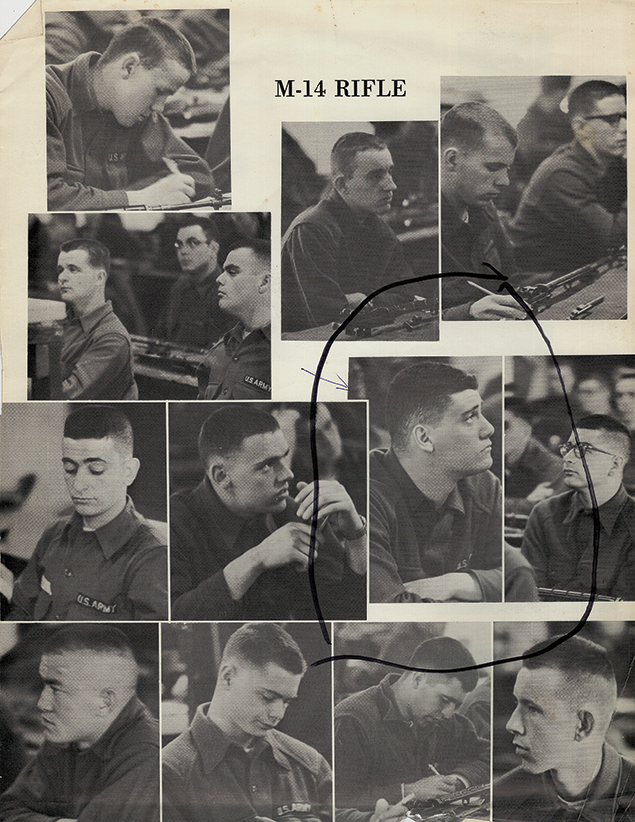 Jon, circled here, and other recruits listen to instruction on the M14 rifle during basic training at Fort Dix in 1965.

A few months into my new job, I found myself having to make up an Army Reserve drill that I had missed. When I arrived at the center in Morris Plains, I expected a relaxed six hours of filing, collating, or redrafting some letters for the commanding officer as part of my duties as company clerk. Then I would beeline to Newark in time for my night shift as a copy editor. But instead of being presented with files to shuffle, I was greeted by the full-time Army Reserve sergeant and told to gear up with a helmet, web belt, and black-and-white MP brassard. I was also reminded to blouse my less-than-gleaming boots by Sergeant Meinelschmidt. (Yes, really. I immediately rhymed it with my Y camp song “John Jacob Jingleheimer Schmidt.” And yes, blousing boots is something you learn to do in the reserves.)

Our orders were to proceed to Newark, check into a precinct house, then follow a patrol car and serve an AWOL detainer at an address in one of the poorest sections of the city. We were not to enter the apartment or press the issue if the suspect wasn’t home or the person who answered said he wasn’t there. If he were present, the police would take him into custody. During the drive to Newark in the unit’s pickup truck, both Sergeant Meinelschmidt and I agreed that neither of us had an ounce of MP training. We belonged to a battalion responsible for small-vehicle maintenance and were entirely out of our element. But there exists a certain mystique (illogic?) to military orders, so we unquestioningly drove on.

After arriving at the precinct station and being assigned two officers, we followed their cruiser to our destination. The four of us trooped upstairs and the burlier of the two cops pounded on the apartment door with his nightstick. When an elderly woman answered, her face reflected fright and concern. She could have been the suspect’s mother or even grandmother and said the person in question was not at home and had not been there for some time. The cops were skeptical and kept pressing their questions and accusing her of not disclosing his whereabouts. Then they insisted on entering the premises.

This went beyond what had been authorized and was potentially explosive. The officers lacked a search warrant and were operating in the poisoned atmosphere of the recent riot, touched off by the beating of a cabbie taken into custody and erroneously reported dead. Both the city’s soon-to-be-majority black population and its overwhelmingly white police force were more deeply distrustful and resentful of each other than ever. Sergeant Meinelschmidt and I exchanged worried glances and told the two cops we were satisfied the suspect wasn’t there and we would be leaving. After a few more tense moments, they decided to stand down. The four of us silently broke up and went our separate ways.

Ray and I (we were now on a first-name basis) believed we had made the correct call in the situation. We were both emotionally drained as I drove out of the city by way of South Orange Avenue, epicenter of the riots, and a short time later crossed into the greener, wealthier suburbs. I suggested we stop for lunch at Don’s, then a restaurant of local renown and now renovated into a Chabad center after a brief inter-life as a preschool. We entered and immediately drew stares from the lunch crowd; two tall, helmeted pseudo-MPs, about to order burgers, fries, and sodas.

When these preliminaries were out of the way, I glanced around the dining room and did a double-take. Sitting two tables away from me was Rabbi Ely E. Pilchik — my rabbi, the Ely E. Pilchik who presided during my bar mitzvah and confirmation at Congregation B’nai Jeshurun, the Ely E. Pilchik whom I had not seen in at least five years of lapsed attendance, during which time the congregation had moved from its domed downtown structure in Newark to an expansive campus in Short Hills. And sitting with him was the associate rabbi at the time, Barry Greene, making the scene even more intimidating. Both looked at us quizzically, but neither said a word.

I shifted a bite of burger to one side of my mouth and whispered to Ray, “That’s my rabbi.” He didn’t miss a beat, asking, “What’s the plan?” “Chew faster,” I responded. Even though both rabbis had arrived before us, we finished in a hurry, grabbed our helmets, and paid the check. 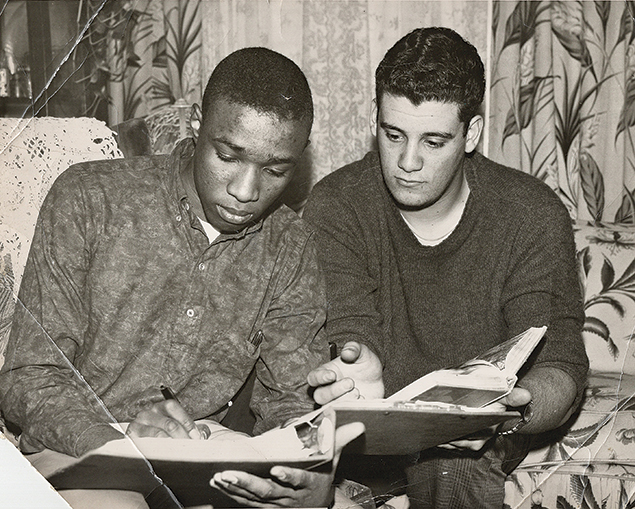 During his junior year at Rutgers in 1963, Jon volunteers in a tutoring program working with students from New Brunswick schools.

During the remainder of the ride, I told Ray that I would have felt uncomfortable greeting my spiritual leader wearing army fatigues after not having talked to him for years, although Rabbi Pilchik had seen plenty of uniforms during his overseas service as a Navy chaplain during World War II. I also didn’t want to go into an explanation of our stressful morning or why I hadn’t attended shul, not that I would have had to since Rabbi Pilchik was a person of keen judgment without being judgmental. When we reached the drill center, I turned in my military gear, changed back into civvies, and sped to Newark for my second go at the city in eight hours.

Thankfully, that evening’s shift at the Star-Ledger proved uneventful. I edited stories, counted out headlines, and vetted captions, allowing me time to decompress. I never learned the AWOL’s fate or heard any further discussion about the case by personnel at the center. Apparently, Ray Meinelschmidt explained things away. To this day, I don’t know whether the woman who answered the pounding at the door was telling the truth or not — and it seems irrelevant.

I resumed my placid duties as company clerk without interruption until my Army Reserve obligation ended in 1971; I was fortunate in that the unit was not activated for Vietnam or riot control.

My relationship with Rabbi Pilchik didn’t end at the diner. When Mom died in 1974 and Dad in 1979, I immediately turned to the only spiritual leader to whom I felt a deep connection— Ely Pilchik. He responded immediately in each instance and officiated at both services. And when I married Gail Abramson in 1981, the year he became emeritus at B’nai Jeshurun, Rabbi Pilchik performed the ceremony in the living room of our West Orange home, joining Gail, whom he had also confirmed as a teen, and me in union and signing the ketubah. Silver-haired and silver-tongued to the end, he never mentioned our non-encounter of years before.

The events of that day in Newark still are in my thoughts. The city is enjoying a renaissance in commerce, education, and cultural events, and its policing policies and diversity are much improved, although still under court-ordered supervision. Yet the stark contrast between my life today and the lives of many Newark residents, living as we do just over five miles apart, still contains the elements of otherness that existed in 1967.

My day of days helps remind me of the work and promise that lie ahead and of the fragile connectivity life’s proximity brings.

Jonathan E. Lazarus of West Orange is a retired editor at the Star-Ledger. He writes and copy edits for the Jewish Standard and the New Jersey Jewish News.