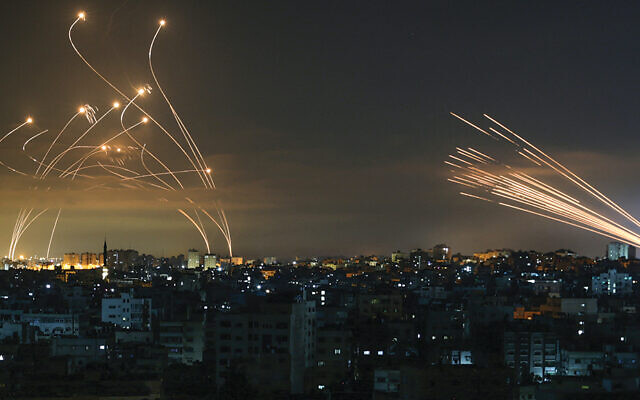 The Iron Dome interceptors, coming from the left, meet a volley of missiles from Gaza on May 14, 2021. (Anas Baba/AFP via Getty Images)

You don’t need me to tell you what’s going on in Israel. I am sure you’ve read countless articles and op-eds about the horrible confluence of missiles from Gaza and street fighting in mixed Jewish-Arab cities.

I’m sure you know that residents of the south and center of Israel are spending their nights in bomb shelters. You’ve probably heard about the firebomb attacks on schools, shuls, businesses, and homes. About vicious attacks and vicious reprisals.

I am also sure that not everything you read or see in the media is accurate. As a journalist, and as an Israeli citizen for nearly 14 years, I guarantee there are subtleties and nuances being missed; facts being skewed or ignored.

So I’m not writing this letter to try to explain what, why, who, or what next. I’ll leave that to others.

I’m writing to give you a slice of life from my little corner of the Promised Land. Just to add some perspective.

I live in Ma’aleh Adumim, a city of 40,000 residents about five miles northeast of Jerusalem. It is a beautiful city of Jews from a large variety of backgrounds and beliefs, surrounded by pockets of Bedouin encampments and Arab towns — many of whose residents are municipal or retail employees — in what we call “Judea” and much of the world calls “the West Bank.”

As of this writing, nothing scary has happened here. Our house has a fortified “safe room” that we have not had to use for shelter, thank God. We are too far east even to have heard the missiles that hit the western outskirts of Jerusalem on May 10.

My aunt, an octogenarian living in a beautiful apartment overlooking the Jerusalem Botanical Gardens, invited us for Shabbat. We have cousins in her building, too. We have not seen them over the past year-plus, thanks to the coronavirus. Despite a split second of hesitation about traveling there at such a time, we decided to go anyway.

We do not own a car; for longer trips we often call a local taxi driver. He was waiting outside our building at 4 on Friday afternoon. I greeted him with a remark about this crazy (“meshuga”) situation.

He answered with a shrug and some sage words, loosely translated as “There’s no such thing as ‘without’ in Israel.” Meaning we’re never without a crisis: the pandemic, the government in disarray, the mass tragedy at Meron, and now the war and riots. 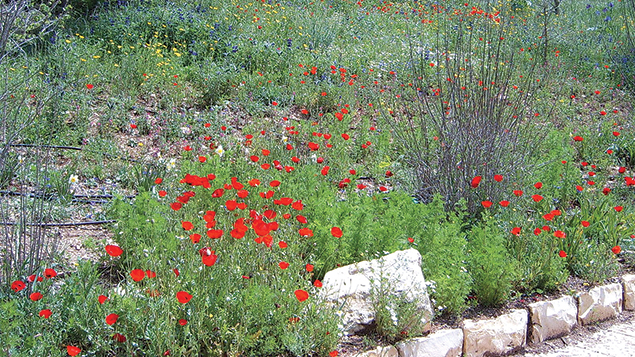 The day before, he’d headed across the country to the airport to pick up a client after confirming that the flight was on time. When he arrived, he found out the flight had been canceled after all, and there was nothing to do but drive home. “I don’t know whom to bill — my client or Hamas,” he joked.

We reached our destination swiftly, the only disturbance caused by construction on my aunt’s street.

The weather was picture-perfect; a warmish day cooled by Jerusalem’s famous evening breezes. Out the window was a landscape punctuated by landmarks including the Knesset, the botanical gardens, the Azrieli College of Engineering, the Shalom Hotel, and the Israel Museum.

After checking in with our mothers and our children in Israel and in the United States, it was time to perform our favorite Friday evening activity before candle-lighting: turning off our phones.

We enjoyed a lovely dinner with our cousins, accompanied by another neighbor who, as a six-year-old girl, had been a passenger on the ill-fated refugee ship that launched Leon Uris’s impactful and iconic novel, “Exodus.”

After a comfortable night in the spare bedroom, we went to shul down the block. It’s a pluralistic neighborhood — some observing Shabbat religiously and others simply enjoying a day off — but we could hear sweet melodies spilling out of synagogue windows and carried on the breeze. The masked congregants ranged from seniors accompanied by foreign caregivers to young marrieds with kids.

One of Aunt Sarah’s grandsons stopped by after shul. He works in security for government officials; his wife is a pediatric nurse. Both jobs require them to work on Shabbat sometimes. Aunt Sarah sent him home with a bag full of homemade goodies for his two preschoolers.

In the late afternoon, my husband and I took a walk and ran into a couple who moved from Ma’aleh Adumim last year. We ran into a physician/scholar whose brilliant Zoom class on the Book of Psalms I had taken over the past several months. We sat in a park under a shady tree, people-watching and musing about life.

After Shabbat, we helped clean up the kitchen and packed our bags. Reluctantly, we turned on our phones. I expected to find that in contrast to our peaceful Shabbat much of the country was in turmoil. And indeed it was so.

“We had nearly 1,000 rockets since last night,” the taxi driver reported as we buckled our seatbelts. “I hope it doesn’t bother you if I keep the radio on.”

I would later learn that my brother and his family in Rehovot had fled for cover during their Shabbat lunch. Friends in Tel Aviv had looked fruitlessly for a bomb shelter with enough space to accommodate them. A cousin in Ramat Gan had heard the boom of the missile that killed a 55-year-old man just three-quarters of a mile away. A colleague’s husband was flying sorties and another colleague’s son was spending tense, sleepless nights with his army unit on the border.

We offered various relatives safe harbor, but everyone was staying home and hoping for the best.

By the time you read this, who knows what else will have occurred? But right now, on Sunday afternoon in peaceful Ma’aleh Adumim, I hear only the sounds of neighbors preparing for the holiday of Shavuot. And for another blissful 25 hours, we will turn off our phones.