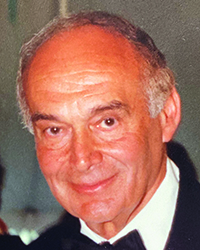 Louis Vincent Aronson II, 97, of Hackettstown died April 19, 2020. Born in Newark, he lived in South Orange and also had lived in the Somerset Hills and Tewksbury communities before moving to Hackettstown in 2016.

In 1947, Mr. Aronson began work as a methods engineer at Ronson Art Metal Works, a company that was formed and incorporated in 1898 in Newark by Louis V. Aronson, his grandfather. In 1952, he became president of the company, which had become known as Ronson Corporation, a public company listed on the New York Stock Exchange. At its height in the 1960s, Ronson became the holding parent of domestic and international consumer products (notably the Ronson lighter) and industrial product/service companies; and its global employment totaled over 7,000 people. The corporation was dissolved in 2011.

He graduated in 1941 from Newark Academy and continued with post-graduate studies at the Severn School in Severna Park, Md. He was admitted to the United States Naval Academy in Annapolis, Md., graduating in 1946 with a bachelor of science degree.

He served as an Ensign in the U.S. Navy.

As a child and young adult, he boxed and weight-lifted at the Newark Athletic Club. At Newark Academy and the Severn School, he played in the fullback and middle linebacker positions on his schools’ football teams. In track and field, the shot put was his event. He was an avid skier on slopes in the U.S. and Switzerland. He played tennis and jogged regularly.

During several summers in the 1930s, he spent his school vacation breaks immersed in the daily life and chores at Sundown Ranch in Aripine, Ariz., and later owned a dairy farm (Holstein cows) for decades while living in Lamington. He also enjoyed photography and had a passion for flying. In the 1950s, he began flying fixed wing aircraft and later helicopters.

Over the years, he was a director on the board of the National Conference of Christians and Jews, a member of the U.S. Naval Academy Athletic Association, a trustee emeritus of Newark Academy, and a member of Congregation B’nai Jeshurun in Short Hills.

Arrangements were handled by Bernheim-Apter-Kreitzman Suburban Funeral Chapel, Livingston. A memorial service will be held later this year in Short Hills.