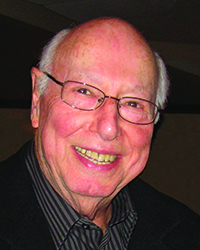 Mr. Bernstein started his career in the display business working with his uncle Samuel Blum and then as a salesman for Decorative Plant, Leo Prager, and Greneker. He became a co-owner of Resident Display with Bud Rosen and Martin Pegler. He later formed Louis B. Bernstein Inc. where, working with his wife Rita, he designed his own displays.

He attended Columbia High School, Maplewood, and the School of Commerce at New York University.

He served in the U.S. Army and was stationed in Japan at the end of World War II.

He enjoyed a life-long photography hobby, and had several exhibitions well into his 80s.

Predeceased by his wives, Rita Bernstein and Darby Reid, he is survived by his daughter, Alyse; three sons, Robert (Shizuka), Glenn (Debra), and Marc (Stephanie); a sister, Rita Reich; a brother, Larry Bernstein; five grandchildren; and a great-grandchild.

Private services were held with arrangements by Menorah Chapels at Millburn, Union. A celebration of his life will be held at a later date. Memorial contributions may be made to the Valerie Fund, 2101 Millburn Ave., Maplewood, N.J. 07040.