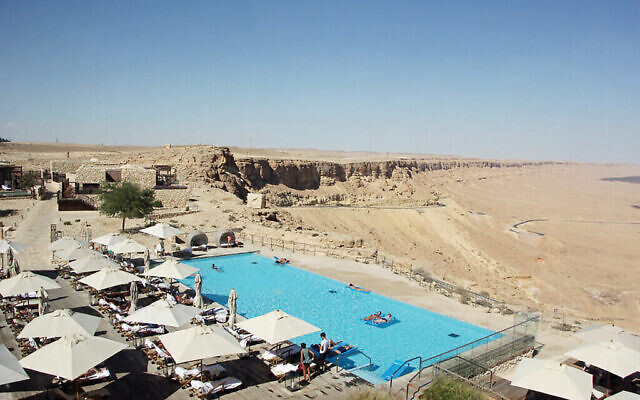 The pool at the Beresheet Hotel, located at the rim of the Mitzpe Ramon crater in the Negev. Flickr

Israel is experiencing an unprecedented tourism boom, with a predicted 4.5 million people visiting the country in 2019. This represents an increase of approximately 1 million tourists from 2017, when 3.6 million people visited. With so many people arriving and the request for tour guides at an all-time high, what are the luxury experiences that can help differentiate tours? And, is it all about high-end or can there be something equally luxurious about an unusual encounter or outstanding service and attention to detail?

In the case of the Beresheet, for example, its location — perched above the Ramon Crater in the Negev desert — certainly adds to special ambiance. With an additional six or so hotels being constructed in the vicinity, it will likely face serious competition in the near future.

In Tel Aviv, Israel’s most cosmopolitan city, there are a number of boutique hotels — the Norman, the Jaffa and the Montefiore, for example — each of which is luxurious in its own trendy way. It is also worth stating that the concept of luxury — as it’s understood in the developed world — is actually relatively new in Israel. For the first several decades of its existence, Israel was too busy with existential matters to think about catering to luxury tourism. Notwithstanding the still-existing threats, Israel has opened up economically and politically, with Israelis also beginning to travel far and wide, and experiencing different cultures and levels of service.

Yomi Groner, an experienced tour guide who has created tours for influential and wealthy people, said, “It is about going that extra step and offering clients something out of the ordinary.”

Groner takes tourists all over Israel but acknowledges that certain areas of the country — due to their natural beauty and stunning backdrops — are more in-demand than others. For example, the Negev, with its makhteshim (natural geological craters), the Dead Sea, the Golan Heights and the Galilee, is a favorite destination for many. One of his favorite activities is to take tourists to the home of a local Israeli, who prepares an outstanding dinner. Included in the price are different meats, salads, breads and other local produce, such as olives and wine, but clearly the idea here is to give travelers the opportunity to meet and interact with local residents, to ask them questions and find out more about their lives.

One of the disciplines that Israel is most famous for, archeology, is also ripe for luxury tourism. Walking about among hundreds of artifacts, dusty tools and buckets may not feel luxurious, but being able to speak directly to some of Israel’s most storied archeologists working today is a privilege reserved for only a select few. “I have taken some of my groups to archeological labs,” explained Groner. “High-end tourists get shown stuff that is not open to the general public – and that may not even be known about by other people working within the field.” 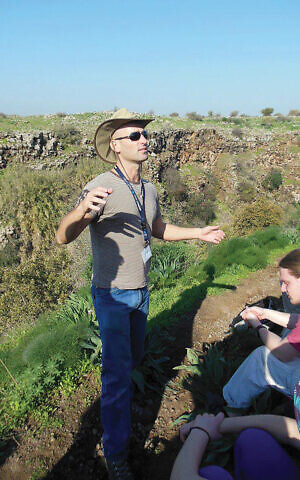 Israeli tour guide Yonatan Weiss out in the field. Facebook

For those who have the right contacts, arrangements can be made to meet high-ranking individuals and influencers, both in the political and business arenas. For several years, Israel has been known as the “Start-up Nation,” and the opportunity to meet some of the people responsible for cutting-edge technologies, or at the vanguard of the culinary scene, is hugely appealing.

As so much of Israeli life revolves around security, the chance to meet recently retired security and army personnel with the highest security clearance is also a big draw. These meetings can be mutually beneficial. Many leading Israeli politicians and decision-makers would jump at the chance to meet a Hollywood star or a famous athlete, as much those stars would like to interact with them. They can also be good for Israel, creating favorable PR and promotes advocacy. Opening hearts and minds creates a buzz that can act as a strong catalyst for other figures at similar levels to choose to visit Israel.

“Perception is extremely important,” said Yonatan Weiss, another guide whose clientele has included some VIPs. “In fact, Israel is a miracle in so many ways — not least in that it either leads numerous fields or is at the forefront of them.”

Two areas of Israeli cultural life that are unrecognizable from even 20 years ago are food and wine. The number of high-end restaurants using the finest ingredients cooked by celebrity chefs as well as the explosion in the number of award-winning wineries is astonishing. Talking of celebrity chefs, some of them — Meir Adoni of Blue Sky, Lumina and Mizlala — will cook for paying guests and create a real show on his audience’s behalf.

In some cases, the food and wine can be delivered to a stop on a tour; alternately, it’s possible to go to a restaurant or winery — or experience both at the same time. Several wineries that are trying to distinguish themselves will offer food pairing menus to accompany their wines. Culinary workshops are also a good way for celebrities and VIPs to enjoy an authentic local experience while remaining low-profile and anonymous. For some high-profile visitors, luxury is not so much about creature comforts — which are widely available — as about listening to local people tell their stories.

From the tour guides’ perspective, there are any number of tweaks that can be made to an itinerary to make it increasingly luxurious. Whether it’s taking a helicopter ride to a chef-cooked meal at the edge of a Negev crater, participating in a wine-tasting in the Golan, joining fighter pilots in a flight simulator or touring the Yvel jewelry factory, there is something for everyone. It will be clear from the tour guides, however, that the country is the star. With visible remnants from prehistory to the remains at some sites of Israel’s kings and evidence of civilizations through the ages, Israel provides a heady mix.

Also crucial to Israel’s tourism industry is the country’s centrality to the world’s three monotheistic faiths — and the drama that ensues from that hardly needs more introduction. But it is clear — and this is something that other fields in the luxury market have found — that it is not just the product itself that imbues something with value; it is also the experience that helped shape it. By providing the usual creature comforts, but by going the extra mile and allowing a cross-cultural pollination, is how to create the ultimate luxurious Israel experience.