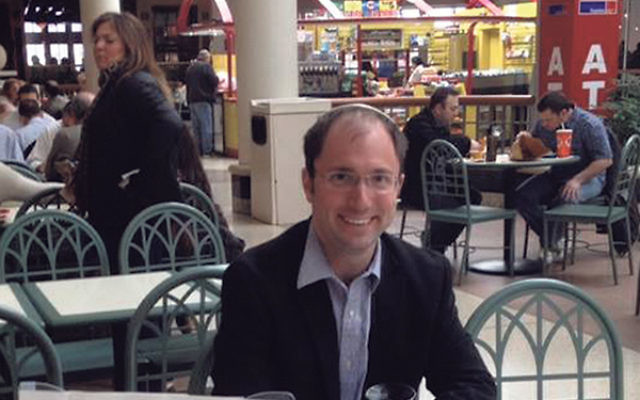 Rabbi Ari Saks at his weekly table in the food court at the Menlo Park Mall has fielded questions and had discussions with both Jews and non-Jews on Israel, intermarriage, and Judaism.

Rabbi Ari Saks believes Jewish learning should not be confined inside the walls of a synagogue.

The religious leader of Congregation Beth Mordecai in Perth Amboy has now also become a “mall rabbi” and the “Jewish educator” at a bakery and sandwich shop.

On Wednesday mornings he sets up at Panera Bread on Woodbridge Center Drive in Woodbridge, a spot where people can stop by and learn in “an open-space, low-barrier setting” he has dubbed “Yeshivat Panera.” Afterward, Saks picks up and moves down Route One to the Menlo Park Mall in Edison, where he sets up a “rabbi’s table” in the food court with a sign inviting shoppers to stop by and ask questions.

“I’ve been doing it since last spring,” said Saks. “I was walking in the mall with my wife and son, and I looked at the food court and saw a bunch of people just sort of hanging out and getting their food. It got me thinking that there are very few public spaces we can just enter without a very detailed outline of why we’re there.”

The mall table has attracted both Jews and non-Jews — including several Christian pastors — and has sparked lots of conversation about Israel and its current political situation and inquiries about interfaith families. The recent holiday season brought a host of questions about Hanukka.

The Panera setting is more learning-centered, with some attendees coming by fairly regularly. Saks uses the Foursquare app to keep in touch with his learners.

“I got the idea for that because I used to learn a piece of Talmud or another piece of text with some young congregation members whose schedules changed,” said Saks. “I thought that maybe it would be a good idea to have the same kind of learning outside the building.”

The fact that the venue is not a synagogue, he said, means “there’s no pressure.”

“The reaction has been very positive. People seem to like that it’s there. Some people have come back and brought friends.”

The only negative reaction Saks has had so far was from someone who saw him at Panera and asked if he was a Zionist.

“I said yes and his response was, ‘Oh no,’” recalled Saks. “I asked him if he wanted to sit down and talk about it, and he said, ‘Not now’ and just walked away.”

Even when there’s a lull, the rabbi puts his time to good use studying Torah and other religious texts.

Joan Shkedi of Edison stops by the mall regularly on her way back from the gym and described the sessions with the rabbi as “no holds barred.”

“You can ask him anything,” she said. “I’ve asked him about topics from biblical times to the present, I have an affinity for Israel and am interested in what’s occurring there. But there’s no question that can’t be put on the table, and he will discuss it even if he doesn’t agree with you. If he doesn’t know the answer he Googles it, and we learn together.”

Shkedi, who was raised as a Reform Jew, said she was also interested in learning about Conservative Judaism’s attitude on intermarriage, abortion, and gay rights, and discussed these and other issues with Saks. And, she said, “because I like the rabbi so much,” she and her husband decided to join the Conservative Beth Mordecai.