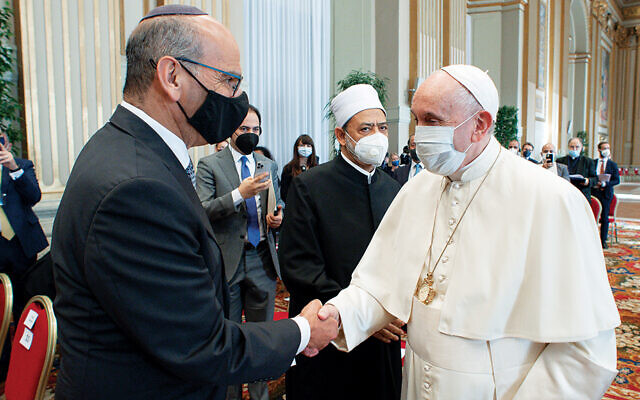 At the Vatican in early October, Rabbi Noam Marans and Pope Francis shakes hands as the Grand Imam of Al-Azhar, Ahmed El-Tayeb, looks on.

If we are lucky, as we get older our horizons expand as we continue to retain our solid footing in our world as it grows around us.

But few of us get to revel in horizons as wide as the one that surrounds Rabbi Noam Marans. As a Conservative rabbi, and the Five Town-bred, day-school and then Columbia and the JTS-educated son of Arnold Marans, another Conservative rabbi, it’s fair to say that until he was ordained, Noam Marans’s life was full almost entirely with Jews. (It’s true that Columbia isn’t a Jewish institution, but it would be hard to walk more than a few inches without tripping over one.)

But he became a congregational rabbi, at the unlikely age of 26; his new shul, Temple Israel and Jewish Community Center, was in Ridgewood, a town not then known as a haven for Jews. He forged many interfaith relationships there.

After 16 years in Ridgewood, Rabbi Marans, his wife, Rabbi Amy Roth, and their four children moved to Teaneck, and he went to work for the American Jewish Committee.

Now, Rabbi Marans is the director of interreligious and intergroup relations for the AJC. It was in that capacity, and as immediate past president of the International Jewish Committee for Interreligious Consultations — a post he held because of his AJC position — that he found himself sitting in the Vatican, in a room full of dignitaries representing religious traditions around the world, there to discuss the threat of climate change — sitting one person away from Pope Francis.

It’s a heady honor for a rabbi; it’s also a serious and historically groundbreaking recognition of the evolving relationship between the Catholic church and Jews.

That was in October.

On Monday, November 1, in Manhattan, the AJC presented its Human Dignity Award to the Ecumenical Patriarch Bartholomew of the Eastern Orthodox Christian Church. Rabbi Marans was at that small ceremony too.

Pope Francis is the spiritual leader of 1.2 billion Roman Catholics around the world; Patriarch Bartholomew leads 300 million Orthodox Christians. The relationship between those two men, who until recently would have been rivals, also has undergone change in a way that leads to hope not only for them but for the rest of the world, Rabbi Marans said.

“They are genuine friends. Bartholomew was the first ecumenical patriarch to be at the installation of a pope for about 1,000 years,” since the schism that divided the once-united church between east and west.

That matters to Jews, Rabbi Marans said. “A Ha’aretz article said that Bartholomew was the reason why Francis made his first trip to Israel so early.” It was in 2014, just a year after his election to the papacy. “I asked Bartholomew personally if that was true because I don’t believe anything I read until I can prove it myself, and he said yes, it is absolutely true. Bartholomew was going to the Middle East anyway, and he said to Francis, ‘Why don’t we go anyway.’ And they went together.

“That was altruism, because when you go to Israel with Pope Francis, you are automatically the second part of the story,” Rabbi Marans added. 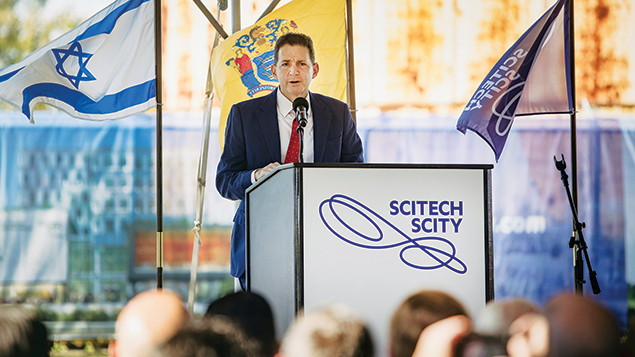 “Francis was intending to go anyway, because he is a philo-Semite,” he continued. “He has Jewish relationships. He has Jewish friends. He arguably is the friendliest pope to the Jewish people in history. There were some great popes in our lifetime — Pope John XXIII, and the whole process that led to Nostra Aetate, and John Paul II, who was the first Catholic leader to visit a synagogue since Peter. And Benedict followed suit.

“Francis now thinks it is part of his job to visit synagogues, to visit Israel, to go to the Kotel, to go to the sites of the Shoah. This is considered just what popes do today. Jews who have even the most minimal understanding of Jewish history know that this is a transformational development, after two millennia.”

The change had started around the middle of the 20th century, and Rabbi Marans was able to see it in his own adolescence, despite its insularity. “I do not remember any significant interreligious initiatives,” he said. “We did not regularly have leaders of other faiths at the synagogue or at our Shabbat table.

“But I have a very powerful, lingering impression when my father took me to hear Handel’s ‘Messiah’  at the Cathedral of St. John the Divine. I remember so vividly that before he went, he took out the libretto, and he shows me, and wrote in Hebrew, the words from Isaiah” — it’s Isaiah 9:5, “For a child is born unto us, A son is given unto us…”– “and he wrote it out as part of the teaching before we went.

“There is a universalism, in the modern rabbinate, and my father, after all, was a student of Heschel and Kaplan and Finkelstein.” (That’s Abraham Joshua Heschel, Mordecai Kaplan, and Louis Finkelstein, all midcentury JTS — and Jewish world — giants.) “He knew that the world had changed, and that he was a beneficiary of it, that his was the generation in which the restrictions upon American Jewish life were lifted.”

Still, that was half a century ago. “What we are facing today is a wholly different challenge,” Rabbi Marans said. “We are not facing the barriers to socioeconomic elevation that our parents experienced, not to mention my grandparents in Bialystok.

One of the great theological changes that upended the Catholic way of relating to Jews — a change forced into being by the Holocaust — was the shift to what Rabbi Marans called its “full-throttled embraced of Jesus as Jew. Once you are teaching that he was born, lived, taught, and died as Jew, it’s different” than when his Jewishness was a pale abstraction.

The importance of the improved relationship between Jews and Christians matter for many reasons, Rabbi Marans said. Some are theoretical, but some are not. “Heschel played a critical role in the Second Vatican Council, and he said that he did it to save Jewish lives.

“He meant that if we posit — correctly, I believe, — that Christianity bears a great responsibility for the negative moments in Jewish history, then we have to believe that Christianity can contribute, as it has, to creating a more positive environment for Jews and Judaism.

“We cannot have it both ways. We cannot blame Christianity and then pretend that we don’t need to engage with Christians in order to create a better world. We need to acknowledge when they have made steps — and they have. And those steps have been game-changing.

“We are not in the busines of Christian/Jewish relations solely for our edification, or for our appropriate desire to understand our fellow human beings, who also are created in the image of God, but also because it is good and beneficial and in the best interests of the Jewish people.” 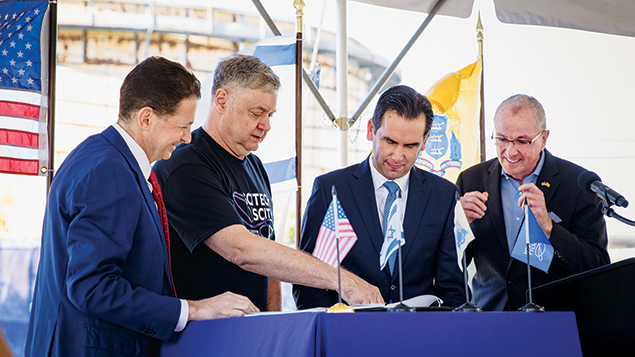 Noam Marans speaks at the Vatican as Pope Francis and Imam Ahmed El-Tayeb listen. The empty chair, one person away from the pope, is for Rabbi Marans.

All this brings us back to the meeting with Francis last month, and with Bartholomew this week.

During this covid time, interreligious leaders have been meeting online to discuss climate change. The Jewish umbrella organization IJCIC, which is made up of representatives of the AJC, the ADL, B’nai B’rith, the World Jewish Congress, the congregational and rabbinic organizations that represent modern Orthodox, Conservative, and Reform Jews, and an umbrella Israeli group, was involved with other faith groups and scientists in the run-up to the COP 26 U.N. climate change conference that’s going on in Glasgow now. In October, leaders met in the Vatican, “between 40 and 50 from around the world, met and ultimately created a document that was rolled out in a series of high-profile meetings at the Vatican on October 3 and 4.” Everyone who could get there did — a few lea ders were stuck at home by their countries’ pandemic restrictions.

The seating was formal and to some extent hierarchal. “It was a very public demonstration of the way in which the Jewish people have pride of place,” Rabbi Marans said. “And as a representative of the Jewish people, I am sitting one seat away from Pope Francis.

“Part of the revolution in Catholic-Jewish relations is their elevation of Jews as unique for Christians relationally,” he continued. “We are part of their internal religious perspective, because there is no Christianity without Judaism.” Although, he acknowledged, “it can sound offensive, but it’s not meant to be offensive; we’re in the intra-religious department, the department that is dedicated to Christian unity. Everyone else is in the interreligious department.

“Remember what Pope Francis said at his installation — ‘I would like to welcome my Jewish brothers and sisters, and members of all other faiths.’

“Sometimes, when we are being glib, we say they are making up for lost time,” he added.

So, at the conference, “there was Pope Francis, and Bartholomew was to his right. To the right is the Grand Imam of Al-Hazar in Cairo, and I am to the grand imam’s left. To Bartholomew’s right is the Archbishop of Canterbury.

“This is not about me,” he stressed. “This is about the Jewish people. Who are a tiny people.”

On Monday, Rabbi Marans, this time representing only the AJC, and other AJC leaders presented the Ecumenical Patriarch Bartholomew with the AJC’s Human Dignity award. “When we learned that Bartholomew was coming, we made a pitch to have the opportunity to encroach on his busy schedule — which included meetings with Biden and Blinken and Schumer and Pelosi” — that’s President Joe Biden, Secretary of State Antony Blinken, Senator Majority Leader Charles Schumer (D-N.Y.), and Speaker of the House Nancy Pelosi (D-Calif.) — so that we could present him with the award. It’s in recognition of his advocacy on behalf of the Earth, of humanity, of intra- and interreligious relations, and most especially his role in advancing Christian Orthodox/Jewish relations.

“This is just a part of our ongoing Christian Orthodox/Jewish dialogue, which began in 1977.”

What does all of this feel like to Rabbi Marans?

“It was an awesome responsibility,” he said. “An unimaginable experience. Something that would have been unfathomable to my ancestors, and it is emblematic of a transformation that we should never take for granted.”