Tel Aviv — There’s a little more than six weeks to go before Israelis trudge back to the ballot box for the third time in less than a year, and the contours of the competition are starting to come into view. Despite his legal woes, Prime Minister Benjamin Netanyahu is still a formidable foe, but it’s looking like challenger Benny Gantz of the centrist Blue and White party might have reason to be encouraged.

The biggest piece of good news for Gantz this week was the agreement on the political left between the Labor and Meretz parties, led by Amir Peretz and Nitzan Horowitz, respectively. Merging their candidate lists eliminates the possibility that one of the two parties might get too few votes to earn a seat in the Knesset — a result that would waste tens of thousands of left-wing votes and potentially tip the balance of power between left and right in the next parliament.

In the previous two rounds since last April, Labor and Meretz have flirted with a merger but in the end have run alone. Meretz narrowly made it into the Knesset last May, due in part by support of Arab-Israeli voters, who were looking to punish their own party, the Joint List, for splintering. In recent elections, parties on the Israeli left have suffered from factionalism, preventing liberals from rallying around a unified opposition leader, and allowing Netanyahu to reach across the aisle to persuade a party from the center-left to join his coalition.

“This is a dramatic day. Many have waited for there to be one address for the left,” Tamar Zandberg, a Meretz parliament member, told Israel’s 103FM radio. “Blue and White has taken the historic role of the Labor Party.”

Labor’s Itzik Shmuli called it an agreement of “hope” that will eliminate the risk of losing 150,000 votes.

For all of Zandberg’s enthusiasm, the polls don’t show any post-agreement bump: The combined list is polling at around nine seats — the same number as the combined number of seats the parties were receiving separately in public opinion surveys. Analysts have suggested that the combined party may suffer even more attrition. In 1992, Meretz and Labor combined for 55 seats, a stark reminder of the erosion of the left-wing political bloc in the wake of the failure of the peace accords. 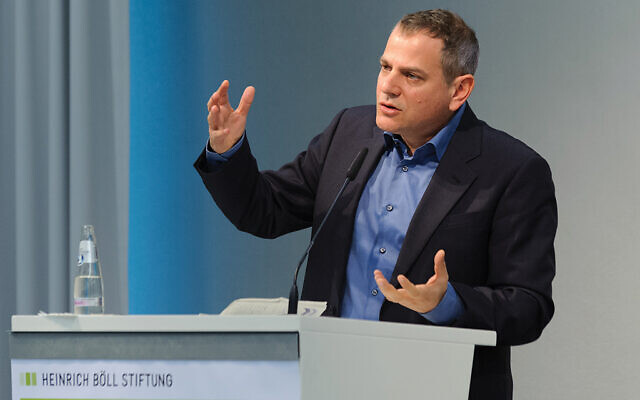 As of Tuesday, two days before the deadline for the parties to finalize their candidate slates ahead of the March 2 vote, Blue and White had another reason for encouragement: Once again, the parties competing for national religious Jewish voters were at odds over joining forces.

On the one hand, there’s Jewish Home, under the leadership of Education Minister Rafi Peretz, a rabbi who has made controversial comments about the gay community; he is running with the Kahanist Jewish Power party. On the other hand, there’s the New Right party, headed by Defense Minister Naftali Bennett and former Justice Minister Ayelet Shaked, who purport to carry the banner of socially “liberal” Orthodox right-wingers. The New Right on Tuesday agreed on a joint run with the National Union Party, headed by Transportation Minister Betzalel Smotrich, who has said Israel’s legal system should be based on laws from the Bible.

Though Bennett and Shaked vowed that they would run independently, on Tuesday the party was under pressure by allies on the right to cut a deal with Jewish Home and join forces. The New Right conditioned a joint run with Jewish Home on a decision by Peretz to jettison Jewish Power. The sides were expected to meet on Tuesday afternoon at the Prime Minister’s residence to try and cut a deal.

“These 36 hours are critical for the right,” said Eitan Zeliger, an adviser to Rafi Peretz, in an interview with Israel radio. “They are gambling with the votes of the right. Do we want a government of leftists to win?”

During the vote last April, votes for national religious parties translated into about eight seats that were wasted on small parties — including Bennett’s New Right party.

On Tuesday, Likud pushed Bennett to follow left-wing parties and find a formula for a merger.

Dahlia Scheindlin, an Israeli pollster and strategist, said the right wing has become too fragmented because of the increased competition over those votes. But because the national religious public only represents about 12 percent of Israel’s population overall, there’s not enough votes to go around.

“They’ve saturated the market” with parties, she said. “If you don’t get 100 percent of them to vote, one of [the parties] are going to go under.”

Public opinion polls show little change in the preference of potential voters between September and now, she said. “They’ve been stubbornly stable.”

According to a poll this week by Walla News, neither the right-wing nor the left-wing blocs can reach a 61-seat majority in the Knesset without the right-wing secular party of Avigdor Lieberman.

In another measure of the tight race, that same poll showed Netanyahu tied with Gantz on the question of who is more suitable to be prime minister. That means that the Israeli public is getting used to the idea of the former general stepping into Netanyahu’s shoes.

Netanyahu had mixed news in his efforts to gain parliamentary immunity from corruption charges: Knesset members voted to set up a panel to debate his immunity, but the committee that will try his request appears likely to reject it.

Ahead of Election Day, the Israeli public may be growing fatigued with the campaigning and tuning out the daily soap opera, said one political strategist.

“The new combinations of political parties is like rearranging the deck chairs on the Titantic,” said Jason Perlman. “We’re shaping up for about the same results as in September. The more flip-flopping, with every announcement, and every U-turn, public apathy is reinforced. Israel is turning into the country of the boy that cried elections.”