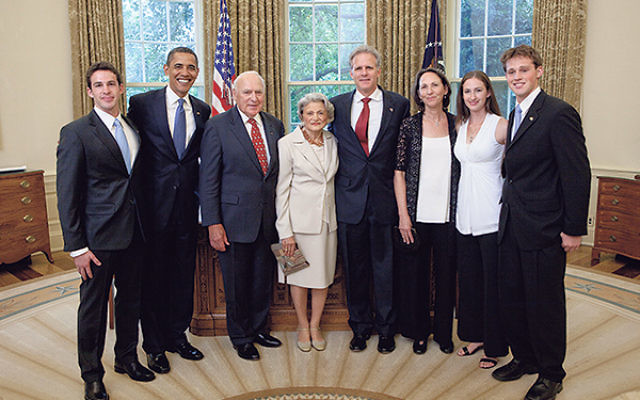 Lester and Marilyn Bornstein, their son Michael Oren, center, and his family meet President Obama at the White House in July 2009 after Oren, then Israel’s new U.S. ambassador, formally presented his credentials.

Although they grew up on the same street in Chelsea, Mass., Marilyn Goldstein and Lester Bornstein did not meet until 1946, a year after World War II. He had walked into her father’s auto body repair shop, and agreed to date the man’s daughter in order to acquire hard-to-get replacement parts for the car he had trashed.

Thus began a romance that started when she was in high school and he was a decorated military hero.

As they sat together on their West Orange patio recently, Lester and Marilyn reminisced about their lives and their children, including Aura, a social worker in Los Angeles who specializes in child and adolescent cancer patients, and Karen, who is in charge of the gerontology center at Valley Hospital in Ridgewood.

But a special source of pride is their son, Michael Oren, 60, who spent six years as Israel’s ambassador to the United State before stepping down in September of 2013.

While Oren is back in the news as author of a controversial memoir of his time as envoy, titled Ally, his father made news of his own in receiving a humanitarian award from the Healthcare Foundation of NJ for his lifetime achievements as a hospital administrator (see related story here).

Oren’s memoir touches briefly but significantly on his youth in West Orange, where the family bought a house in 1960.

Before that, “Michael was a very hyperactive three-year-old,” said his mother. “He would wake up at five o’clock in the morning and run around, and the people downstairs in our two-family home would hit the ceiling with a broom handle. It was miserable.”

Their young son’s behavior led them to find the single-family house where all three of the Bornstein children grew up. (Oren changed his name when he immigrated to Israel in 1979). In Ally, Oren writes that two memories of hometown anti-Semitism played a major role in his career path and dedication to Israel.

One was being the victim of childhood bullying; he writes that he “rarely made it off the school bus without being ambushed by Jew-baiting bullies.”

“There was an Italian family, and they were tough anti-Semitic kids,” Marilyn recalled. “They gave Michael a terrible time on the bus, and the other kids gave them the power to encourage them.”

“So I bought him boxing gloves,” said Lester. “I said, ‘You’ve got to learn to defend yourself.’”

“When the day of the fight came, and I didn’t want the other kids to pile on, I said, ‘I am going to be the referee,’” said his mother. “But I didn’t have to be impartial at all. Michael really won the fight, and that took care of the problem.”

Then, in 1971, an early-morning explosion caused heavy damage at the Bornstein family synagogue, the West Orange Jewish Center (now B’nai Shalom). No one was ever apprehended for the blast, which occurred the morning before right-wing Jewish militant Rabbi Meir Kahane was scheduled to address the Conservative congregation.

The bombing “left a scar on Michael,” said Lester. “He saw something that he thought was almost akin to the Holocaust.”

His parents were not surprised when their son — by then a rising Middle East scholar who had served as an aide to Israel’s United Nations delegation — announced that he planned to make aliya.

“When he was 10 years old, he told us he wanted to move to Israel when he grew up. It was on his mind the whole time,” said Marilyn.

“I thought it was just a fad and it would pass,” said Lester. “He had this vision of being a pioneer. He wanted to build a country. When he was 14 years old he would run into New York and go to Histadrut, the Israel trade union. He told them he wanted to volunteer and they told him, ‘You’re too young. You’ve got to be 18.’ But he didn’t take ‘no’ for an answer.”

At 16, Michael made his first trip to Israel, a year after the synagogue bombing. When his parents visited that summer “he was on a very socialistic kibbutz,” said Lester. “We found him in a field covered from head-to-toe in manure. He looked up at me and said, ‘This is where I want to live.’ He was filthy and smelly and dirty; I couldn’t believe it.”

In some ways, their son’s career choice is still a surprise. “When he was a young boy, I said, ‘This kid is either going to land in jail or he will become a very important man, because he had this personality that was always out there,’” said his father. “I worried about him because I didn’t think Israel could hold him. I felt he would find Israel too small, too confining.”

Oren now holds a seat in the Knesset in the centrist Kulanu Party. His parents are not sure about his next move.

“I think he is very good for Israel,” said Lester. “Israel needs a guy like Michael, and whether that is in politics or not. I don’t like to see him in politics. He has a good head. He is a good thinker. He is the kind of person who could make an adjustment with the Palestinians in a way — live and let live, not being aggressive.”

“I cannot imagine what will be next for him,” Marilyn said.

Could she conceive of her son running for prime minister? “It’s a possibility, but that isn’t what I’d like to see Michael do,” she said. “I don’t even like him in politics, because politics is so dirty, and I don’t think he is that type at all.”