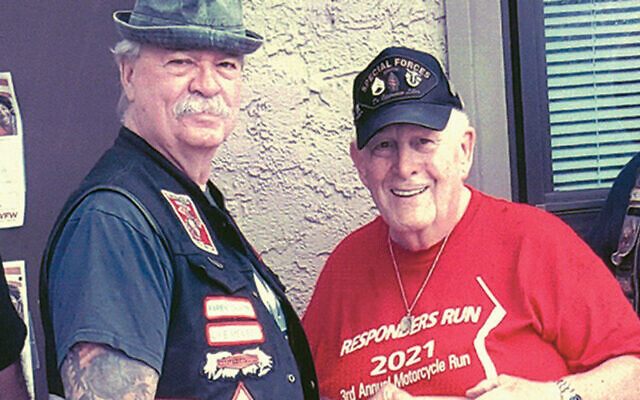 Jack Quigley, left, presented a check to Bob Nesoff on behalf of the Nam Knights.

Members of Nam Knights, a Vietnam War veterans motorcycle club, banded together to make a donation to Responders Run, a motorcycle rally that raises funds for first responders — police, fire, EMTs, and military seriously injured or killed in the line of duty. Jack Quigley founded the Nam Knights Motorcycle Club for veterans who served in Vietnam. The Nam Knights has participants from all over New Jersey, including many from the MetroWest area.

Responders Run president Bob Nesoff, a former president of Congregation Beth Tikvah in New Milford and member of the JCC of Paramus/CBT, said “These men, more than most anyone else, know what it is to sacrifice and be willing to give all for this country. They were willing to sacrifice and know that others have taken their place and stand for the country.

“The members of his organization still take their obligation to service and helping others very seriously,” Mr. Quigley said.

The Nam Knights is a national organization; through its chapters, it holds a variety of events from motorcycle rallies to motorcycle shows to raise funds for these worthwhile causes.

The Responders Run, a 501(c)3, tax exempt organization run entirely by volunteers, also donates to the Special Operations Warrior Foundation and the Disabled American Veterans. Among the donations it has made are
to the family of a Jersey City detective murdered by urban terrorists, the 8-year-old daughter of a Green Beret killed in action, and the family of a Rockland County volunteer fireman who died while saving elderly residents of a senior facility from a fire.

The next scheduled Responders Run rally is scheduled for August 21 from Paramus Veterans of Foreign Wars Post 6699 at 6 Winslow Place. There will be entertainment, prizes, and vendors at the event following the run. Food and soft drinks will be provided for riders, passengers, and walk-ins. Commemorative tee-shirts will be given to first 200 rider registrants. Others may buy them. For more information, email Mr. Nesoff at Bobmetnews@aol.com.