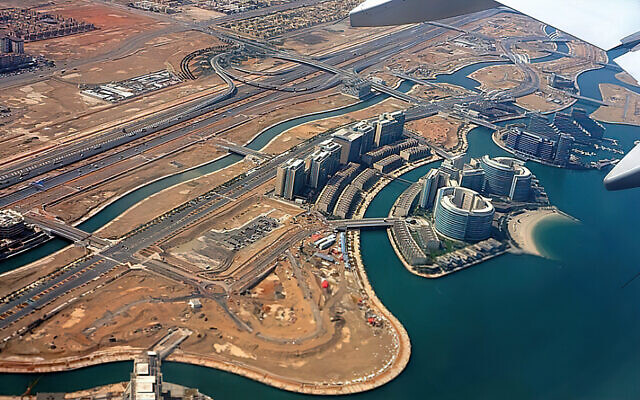 Aerial view of Abu Dhabi and the Persian Gulf

“Two years ago in D.C., we saw the launch of the Congressional Caucus on Black-Jewish relations,” Rabbi Levy, the Milburn-based director of AJC New Jersey, said. Last year’s forum, which met held, announced the launch of a similar body in the Senate. “We’ve been blessed to have a number of historic events,” Rabbi Levy said. “A few years ago, in Jerusalem, the Austrian president declared that Austria’s support of Israel is a core commitment of the country.”

This year’s Global Forum, held online from June 6 to June 9, did not disappoint. At that meeting, Sheikh Abdullah bin Zayed Al Nahyan, the United Arab Emirates’ minister of foreign affairs and international cooperation, enthusiastically welcomed the AJC’s announcement that it has opened an office in Abu Dhabi.

“We are thrilled to have you,” Sheikh Abdullah said. “We will do anything possible to make your presence as here worthwhile. Hopefully, your presence in the UAE is part of our journey, part of changing mindsets.”

Rabbi Levy, now entering his fifth year with the advocacy organization, noted that Sheikh Abdullah attributed the warming of relations between the UAE and Israel to several factors.

First, the pandemic. “There is recognition that science will play a much bigger role in our thinking going forward,” Sheikh Abdullah said, as quoted in an AJC press release. “It is only possible when you have successful technological countries, like the UAE and Israel, in the region come together. Such a partnership was due, but covid has made us move in that direction much faster.”

He said that the UAE will host World Expo Dubai in October, and more than 190 countries will participate, including Israel and the United States. It will be the first time a Muslim-majority country hosts this kind of meeting.

The Abraham Accords also are influential in warming relations between the UAE and Israel, he continued. “I really hope the Abraham Accords can excite the people of the region,” he said. “This goes beyond peace. It goes to a point where we are partners in seeing a better future for our kids.” To advance Israeli-Palestinian peace “requires leadership and parties understanding what is valuable. This has been missing.”

Rabbi Levy said that he hopes that next year’s forum will be back in person and once again in Washington, D.C. Generally, he said, the number of people participating in these meetings is quite high. The 2019 forum, held live, drew more than 2,000 participants. “The whole virtual platform reaches hundreds of thousands of people,” he said. “There’s a significant viewership live, then many more catch up with recordings posted after the event.”

The idea of opening an office in Abu Dhabi was first broached in 2019. “We’re very excited about this,” Rabbi Levy said. “It will be the first office in an Arab country of a Jewish advocacy organization. We’ve spent 25 years sending missions to the Gulf States, engaging in discussions to build relationships that would be supportive of, or meaningful to Israel and the Jewish people.

“If it wasn’t for those 25 years, we’d really be hustling,” he added. “The Abraham Accords opened up a new vista and a network of relationships. Our CEO” — David Harris — “felt it was critically important to move immediately and bring an office to the area and a high-level ambassador as its director, to really be in at the ground floor.”

“AJC Abu Dhabi is truly historic,” Mr. Harris said in a press release. “It will enable AJC to expand on our decades of bridge-building in the region and create a wider network of stakeholders in the new relationships made possible by the Abraham Accords.”

The office — its full name is AJC Abu Dhabi: The Sidney Lerner Center for Arab-Jewish Understanding — now is open for business, with Ambassador Marc Sievers as its director. Ambassador Sievers, who recently retired after 38 years in the U.S. foreign service, served in 12 posts in 10 countries, including in Rabat, Ankara, Algiers, Cairo, Riyadh, Tel Aviv, Baghdad, and Muscat. Most recently, until November 2019, he was ambassador to the Sultanate of Oman.

Rabbi Levy called Mr. Harris a “visionary, who stepped up and said we have to be there.” He paid tribute as well to the late Sidney Lerner, whose family made a gift in his memory. Mr. Lerner was passionate about building relationships between Israel and the Arab world, he said.

“This is not just about opening an office,” Rabbi Levy said. “One of the missions of AJC is trying to promote and advance dialogue, relationships, and cooperation between Arab and Jewish communities, Muslim and Jewish communities.” Years ago, he said, AJC launched online videos in Arabic, called “An al-Yahud,” explaining Judaism to Arabs and Muslims, with the goal of building understanding and showing why Israel matters so much to Jews.

There a Jewish community in Abu Dhabi, and a rabbi visits “pretty regularly,” he added. Over the last six months, Rabbi Levy has been joining them online for Shabbat services. “They’re mostly expats,” he said. “It’s a lovely little Jewish community.”

The AJC prides itself on connecting with leaders in all walks of society — political, civil, and business —  “doing direct advocacy with those who matter most,” Rabbi Levy said.  It also is concerned with combating anti-Semitism, “in having a voice in combating tropes we’ve seen there,” in Abu Dhabi. “We need to get out the understanding of who the Jewish people are.”

While the pandemic has been a factor in drawing countries closer to Israel – “It has attracted other countries, seeing how well Israel has done” – it also has presented a challenge to AJC, “which thrives on traveling the world.” Still, “we pivoted to technology to continue that advocacy and have not slowed it down,” he said. “We didn’t close up our tents.”

Asked whether he thinks opening the new office will further the cause of peace, Rabbi Levy said, “I can’t help but believe that building relationships with other countries in the region, and encouraging better relations with Israel, will further cause of peace. The UAE government has warmly welcomed AJC.

“They understand us as a great partner in building relationships.”