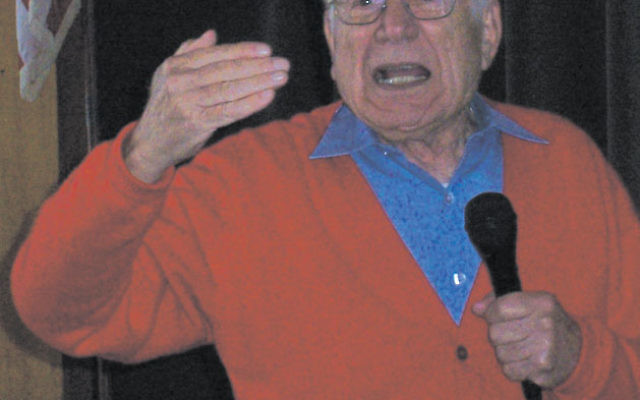 Rabbi Jason Klein hopes to change the metrics of success of rabbis from synagogue membership to communal influence.

Growing up in Montclair, Jason Klein found a role model in Rabbi Perry Rank of Congregation Shomrei Emunah. “He really had a way that was very charismatic and warm and connected with children and adults,” said Klein. “I always looked forward to events at the synagogue.”

Now a rabbi himself, Jason Klein is thinking a lot about role models these days. Earlier this month, he was elected president of the Reconstructionist Rabbinical Association, making him the public face of the youngest of Judaism’s four main denominations.

Klein is also the first gay man (although not the first LGBT person), as well as the first Hillel director, to take on the presidency.

“I think that people find connections and role models in many forms,” he said, speaking with NJJN from the RRA conference in New Orleans shortly after being elected. “It’s great when role models look and act like us and have certain common experiences, values, and ideals. It can be helpful, especially for some who still feel they are on the margins rather than in the forefront of leadership.”

Klein, who is executive director of Hillel at University of Maryland, Baltimore County, will hold the lay position for two years. “I’m very excited, honored, and humbled. I’m looking forward to doing great work over the next few years,” he said.

At the top of Klein’s agenda for the RRA is cultivating new definitions, and metrics, of success for rabbis.

“People are used to the synagogue community as the primary connection to the Jewish community. But we need to understand ourselves in a world context that includes people for whom synagogue is not front and center.” He added, “We want to build networks that transform the world one person at a time. I think my colleagues are very good at creating and leading in different spaces without shying away from issues that matter, like world poverty, slavery, and Israel.”

Perhaps his perspective comes from his own leadership role at Hillel, which he said has already undergone a similar kind of transformation.

“Hillel has gone from being a synagogue on campus, a programmatic center, to being a foundation for Jewish campus life,” he said. “We judge the success of our work based on the kinds of relationships being formed.”

The smallest of the major streams, Reconstructionism is sometimes said to chart a middle path between the Conservative and Reform movements. The Jewish Reconstructionist Movement comprises just over 100 synagogues and havurot, mostly in the United States and Canada, and the RRA has a membership of nearly 300 rabbis.

The success of the movement, Klein said, needs to be measured not only in its membership but in its influence. As an example, he cites the first bat mitzva. Held in 1922 for the daughter of Mordecai Kaplan, founder of Reconstructionist Judaism, it has become a standard life-cycle celebration across the denominations. Even Modern Orthodox synagogues create ceremonies for girls.

“To what degree are we renewing ourselves as a force for Jewish engagement, a force for good in the world? The current generation joins less, so our mantra must be less about membership and more about community,” he said.

Klein spent his earliest years in East Brunswick and moved with his family to Montclair when he was eight. He graduated from Montclair High School. His mother was a Jewish educator who taught preschool at Temple B’nai Abraham in Livingston, and his father worked in the pathology department at Mount Sinai Hospital in New York.

His paternal grandparents ran Imperial Caterers, a koshering catering company in Irvington, until 1987.

He remembers seeing “a copy of the Jewish News on the kitchen table every weekend.”

While there weren’t many Jews then in Montclair — “We maybe had seven or nine in my Hebrew school class” — he still remembers which kids from school went with him to Shomrei Emunah, which ones went to nearby Bnai Keshet, and who “traveled all the way to Bloomfield” to attend the Reform Temple Ner Tamid.

By the time he was in fourth grade, he knew he wanted to be a rabbi, and occasionally signed his name “Rabbi Jason Klein.” While he gravitated toward science in college, he ultimately returned to his first love — though scientific references still pepper his sermons.

Klein’s last few days of high school helped him realize the importance of the Jewish community in his life. That was when he made national headlines for handing out condoms at the senior prom.

“Those days are connected to social justice. I had learned the concept of tikun olam quietly and persistently,” he said. “And in those last few days of high school, some people were upset, but I really felt the support from the leaders of the Jewish community. It crystallized a lot of what I had learned.”