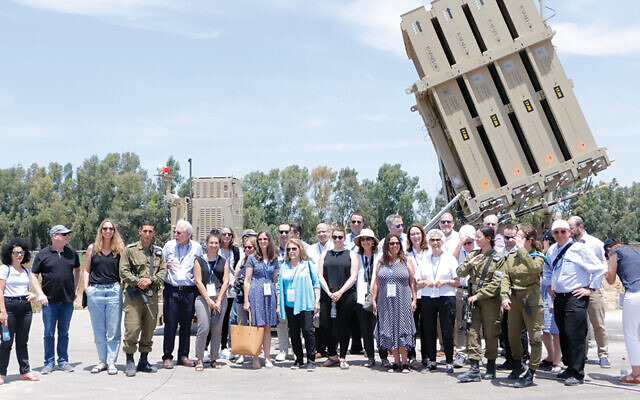 Members of the Greater MetroWest Solidarity Mission to Israel, which was in the country June 7 to 10, visited an Iron Dome battery near Sderot. (Shachar Sabag)

Yet the short visit left a strong impact on the group of Conservative, Orthodox, and Reform rabbis and cantors, and Jewish Federation of Greater MetroWest and community lay leaders.

Dov Ben-Shimon, the federation’s chief executive officer, said participants came bearing “a message of love and support and partnership from our Greater MetroWest Jewish community to the people of Israel.”

“This wasn’t a trip,” he added. “It was a mission in the best sense of the word — a sense of commitment, solidarity, community, and discovery.”

The packed itinerary included face time with residents of Ashkelon, where 960 rockets fired by Hamas from Gaza wreaked destruction between May 10 and May 21.

Leslie Dannin Rosenthal of South Orange — a past president of the federation and a member of both the Jewish Federations of North America’s board of trustees and JFNA’s National Women’s Philanthropy’s advisory council — said that one of the most impactful moments of the mission was meeting Dovid, 85, a longtime resident of this coastal city. He served in five wars as a former tank commander and still retains a military bearing, she said.

“When he talked to us about running for the bomb shelter in his yard, he choked up,” she recalled. “A strong mountain of a man like that chokes up over having to be in fear in his own home and being worried about his neighbor across the street.”

The neighbor was an elderly man whose house was destroyed by a rocket while he was in his safe room. “When they opened the iron door of the bomb shelter, they found him injured but alive,” Ms. Dannin Rosenthal said. She emphasized that Ashkelon is not disputed territory; it is within the pre-1967 borders, about eight miles north of the Gaza Strip.

Mr. Ben-Shimon noted that JFGMW — one of the largest Jewish federations in North America and the largest in New Jersey — supports the Jewish Agency for Israel’s Victims of Terror Fund, which responds quickly to such tragedies. But beyond monetary support, the act of coming to Ashkelon and “listening, hugging, reinforcing a message of unity and being together, is vital,” he said. 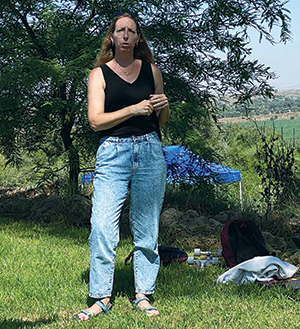 Michal Zur, the assistant director of Global Connections in Israel for the Jewish Federation of Greater MetroWest, lives on Kibbutz Erez near the Gaza border. (Courtesy of Leslie Dannin Rosenthal)

The group visited one of 10 Iron Dome installations to see how soldiers operate this mobile missile defense system, which destroys approaching projectiles with a reported 90 percent success rate. “We were awed by the professionalism and dedication of the young soldiers we met there,” Mr. Ben-Shimon said.

“Some of these soldiers we met come from our own Greater MetroWest communities. We have dozens of young people who are serving as lone soldiers, and our Jewish federation maintains strong connections to as many of them as we can reach. Because — and this is a fact — there are more lone soldiers from New Jersey serving in the IDF than from any other state.”

They later hosted a dinner for lone soldiers from MetroWest at ANU: The Museum of the Jewish People.

Another visit that left a lasting impression on mission participants was Kibbutz Erez, a Gaza border community whose security has been enhanced through a 20-year partner relationship with the federation.

“The kibbutz is literally five miles from the Gaza border,” Ms. Dannin Rosenthal said. “These people don’t have 15 seconds to run for the bomb shelter. What’s worse, even though all protections have been taken against terror tunnels, they were told to stay at home with the windows and doors closed, just in case.”

Nevertheless, Michal Zur, who lives in Erez and is the assistant director of JFGMW’s Global Connections in Israel, told the group that she and her family decided to stay put, and she supports the idea of building an international industrial park between the kibbutz and the border that would employ some 10,000 Gaza citizens.

“Michal said it’s necessary because they want to live in peace and dignity and they know their neighbors do, too,” Ms. Dannin Rosenthal said.

Matt Gewirtz, the senior rabbi of Congregation B’nai Jeshurun in Short Hills and president of the Coalition of Religious Leaders of the State of New Jersey, said that Ms. Zur’s attitude is “extraordinary and courageous.

“Her two reasons for staying are both based on Zionism. The first is that someone has to hold the border; if people move away, there is no border. The second is that by staying she is going to ensure she lives in a shared space with the Gazans next door. She differentiates Hamas from the Palestinians who live there, people just like her, with jobs and kids. Nobody here would imagine someone like this — a person who has reason to say ‘Let’s destroy these horrible people’ — showing an incredible appreciation of the nuances.” 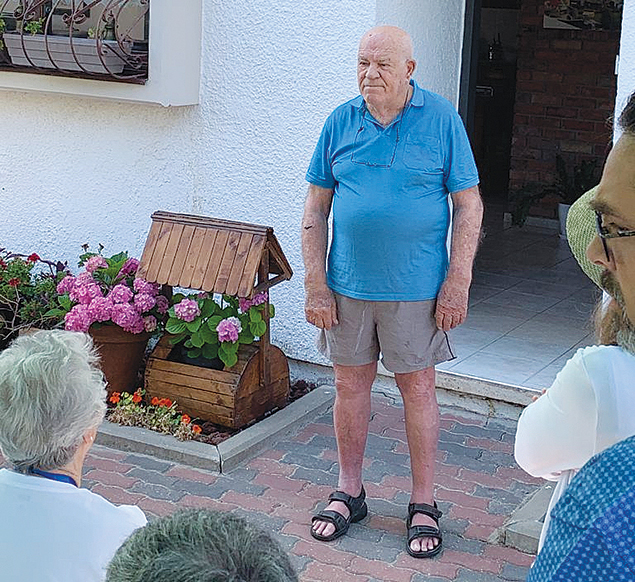 Dovid, a 85-year-old former tank commander and veteran of five wars, talked about his fears for his neighbors because of the rocket attacks in Ashkelon. (Courtesy of Leslie Dannin Rosenthal)

Ms. Dannin Rosenthal said that often it’s hard for Americans to understand the complexity of Israel’s geopolitical and security situation. Thinking about it “requires more depth than liking a meme on a Facebook page,” she continued. “The facts are multidimensional. People think it’s checkers, but it’s 3D chess.”

She recommended that people read articles and posts from more than one point of view, and most importantly, that they make an effort to encounter Israelis at home.

The federation has a new Israel emissary, Tamar Refesh, and soon it will welcome five Israelis on their gap year between high school and military service who will work locally in public and day schools, synagogues, and youth groups through a Jewish Agency program.

“The best way to understand is to talk to Israelis, and we at Federation have the capacity to introduce people,” she said. “You have to sit and talk with people who live this every day.”

Because she did not want to alarm family, she did not tell them ahead of time that the group was going to go to Lod, the mixed Arab and Jewish city that has been suffering several weeks of racially motivated violence.

“In Lod, we met with an Orthodox woman named Orit,” Ms. Dannin Rosenthal said. “She and her husband moved there from a nice Tel Aviv suburb so their children would see a more diverse face of Israel. During covid, she and other Israeli Jewish and Arab women in Lod created an outdoor library with books in Hebrew, Arabic, Russian, and English.”

Orit is involved in JFGMW’s Shared Society initiative for its partner communities. She and an Arab friend, a Muslim teacher who works in a Jewish school, described the challenges of living in Lod to the visitors. During the riots, Orit told them, she could see that synagogue very near her home was on fire.

“These two women” — Orit and her friend — “definitely have different opinions on the situation and what’s needed to fix it,” Ms. Dannin Rosenthal said. “But they were listening to each other respectfully, and they continue to meet.” This encounter and the new government coalition that was coalescing while the mission took place gave her a hopeful feeling for Israel’s future, she added. 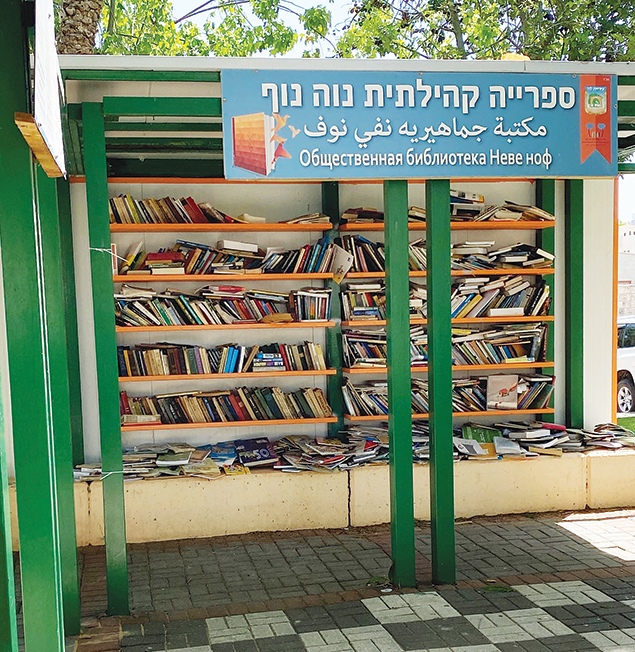 This shared library was created by Jewish and Arab moms in Lod. (Courtesy of Leslie Dannin Rosenthal)

Another stop was in the mixed Arab-Jewish town of Abu Gosh west of Jerusalem. There, the New Jersey delegation visited the Hinam Center, a hub for encounters and joint studies supported by JFGMW. They spoke with Jewish, Arab, and Druze participants in Hinam’s community initiative, Leaders for Cohesive Society.

The mission began with a briefing from Avi Dichter, who is a former head of the Israel Security Service — the Shin Bet — and a former minister of internal security.

Mr. Ben-Shimon described Mr. Dichter as “a man with unique insights into Israel’s security from over 50 years of service. It was clear that the assumptions and expectations of macro-strategy are balanced with the very real understanding of individuals’ pain and suffering. There are no easy answers or options here. And responsible decision-making takes time and intelligence and wisdom.”

Next, the group went to the Israel Police Academy to meet Deputy Police Commissioner David Bitan, “a dear friend of Greater MetroWest, and received a full overview of the dedication, professionalism, service, and selflessness of the police force these past months,” Mr. Ben Shimon said.

“We heard ‘thank you’ from everyone,” he added. “Missions and groups aren’t really back yet. And a mission from GMW showing support and solidarity really means a lot.”

Rabbi Gewirtz said he came away with the feeling that “it is as important as ever that American Jews stand behind the state of Israel. We have to be utterly devoted and out loud about it. I believe that without Israel we would not have American Jewry, so for selfish and selfless reasons we have to stand four square behind Israel. We can be all over the political spectrum — but still be unified in our love and support for our homeland.”

However, he added, “There are complications that are searing on the Jewish spirit, about sharing that space with Palestinians. We have to be open and honest about these problems, understand the history of them, and talk about them. It’s a complicated narrative and here in the United States you get very simplistic 140-character messages that don’t come close to describing the reality.”

The other members of the mission, in alphabetical order, were:

Gary Aidekman, a past president and current board member of JFGMW and its Jewish Community Foundation.

Ruth Margolin, vice president of Jewish Family Service of Central NJ and board member of JFGMW and Congregation Beth Israel of Scotch Plains.

Maxine Murnick, a trustee of the Jewish Community Foundation and JFNA, and co-chair of the Centennial Targeted Gifts Campaign.

Rabbi Michael Satz of Temple B’nai Or in Morristown.

James (Jimmy) Schwarz, past president of JFGMW and Jewish Education Association of MetroWest.