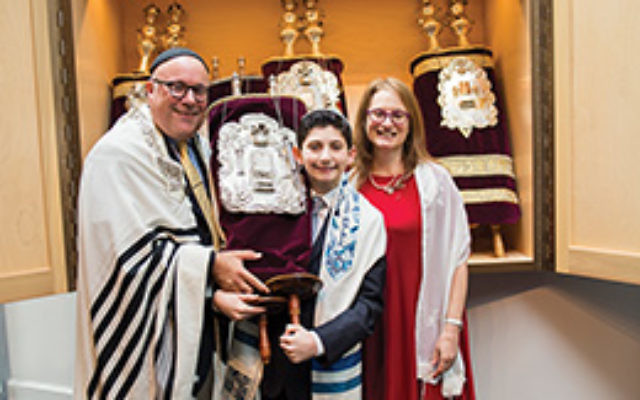 Nathan Mirsky never really worried about mastering the prayers or chanting the Torah portion or haftarah for his Oct. 14 bar mitzvah at Congregation Ohr Shalom: The Summit Jewish Community Center. That’s because he knew he could rely on Cantor Janet Roth and Rabbi Avi Friedman. “I knew they’d figure it out,” he said, recalling their efforts on his behalf at his Berkeley Heights home on a recent Sunday, just a few weeks after his bar mitzvah.

Roth didn’t share Nathan’s confidence when their lessons began last winter: Nathan, a competitive gymnast and a driven student, also has a severe stutter that has grown progressively more serious since it emerged when he was about 6. It worsens when he’s in anxiety-inducing situations: meeting new people, presenting in class, speaking to a reporter. Standing before a packed to demonstrate his newly learned religious skills would also qualify.

Working with youngsters who have challenges was not new to the cantor. “Other kids have come in with varying learning differences, and we always find a way to make it happen for them,” she said. “The difference for Nathan was that even though his mind could process the material, he was, to varying degrees, physically incapacitated.

“Sometimes he would come to a lesson and not be able to get one word out — even in English,” Roth said, adding, “I was worried that the stutter wouldn’t let the Torah — in the broadest sense — come out of his mouth.”

A few years earlier she worked with Nathan’s older brother, David, who also stutters, but there was no comparison. David “had to put forth a lot of effort, but he was able to chant on his own,” Roth recalled.

According to The Stuttering Foundation, “Stuttering is a communication disorder in which the flow of speech is broken by repetitions (li-li-like this), prolongations (lllllike this), or abnormal stoppages (no sound) of sounds and syllables.” About 1 percent of the world’s population stutters, and about 5 percent of children have issues with stuttering for six months or more. Stuttering is often genetic and it’s not reflective of psychological issues.

Sitting at his dining room table, munching on a cookie while speaking with this reporter, Nathan was poised and articulate; the stutter was noticeable but not incapacitating. It comes and goes, he said. “I know I can speak fluently. It’s just sometimes, I can’t.”

Many stutterers, Nathan included, find that their stutter diminishes while singing — to wit, there are even cantors with stutters. But for Nathan, the problem came from the wind-up; he just couldn’t get started.

“The prayers do have singing, but it was hard to initiate it,” he said. “I felt once I could start to sing — I just knew if I had some sort of help, but help that was not verbal — then I could do it.”

Nathan’s personality is so that he is optimistic, staying in the moment and not looking far ahead. That served him well, as he said he doesn’t remember ever feeling defeated or pessimistic while working with Roth.

His teacher remembers it differently, however.

“I felt that I was torturing him,” Roth said. She tried to help get him started, but she said it wasn’t working. “It’s not that he didn’t know the material, he did — but the stutter was crippling.”

Roth, who plays piano by ear, often plays along with students during lessons, as she’s found it subtly prods their memories. She tried it with Nathan.

Suddenly, she said, “He could chant. On his own. I didn’t need to sing with him.”

Said Nathan, “The piano kept me on track. It just kind of like paused for me. It told me when to do certain things. I knew I could breathe. I just went along with it.” He found that his brain processed the music from a piano differently. “The sounds triggered my brain to think it was a song, and because it was a song I could sing more fluently.”

After their breakthrough, Roth played the piano with him for the Torah reading, haftarah, and prayers.

Nathan acknowledged that he did worry about the one part of the service that defied piano accompaniment: the d’var Torah. For that, he said, no matter how much he practiced, “all bets are off with a crowd.” His parents, Danielle and Steve Mirsky, took him to a Riverdale specialist with a reputation for assisting stutterers with public speaking. Nathan memorized his speech, and with plenty of practice, he delivered it “flawlessly,” according to his mother. “I stuttered once,” Nathan corrected her.

In the end, both student and tutor were thrilled. “I stumbled on this solution by chance,” said Roth, and as a result, Nathan had what she called “a stellar” bar mitzvah.

As for Nathan, well, he summed it up: “The party was fun and the rest was definitely a good experience. But I hate being the center of attention.”