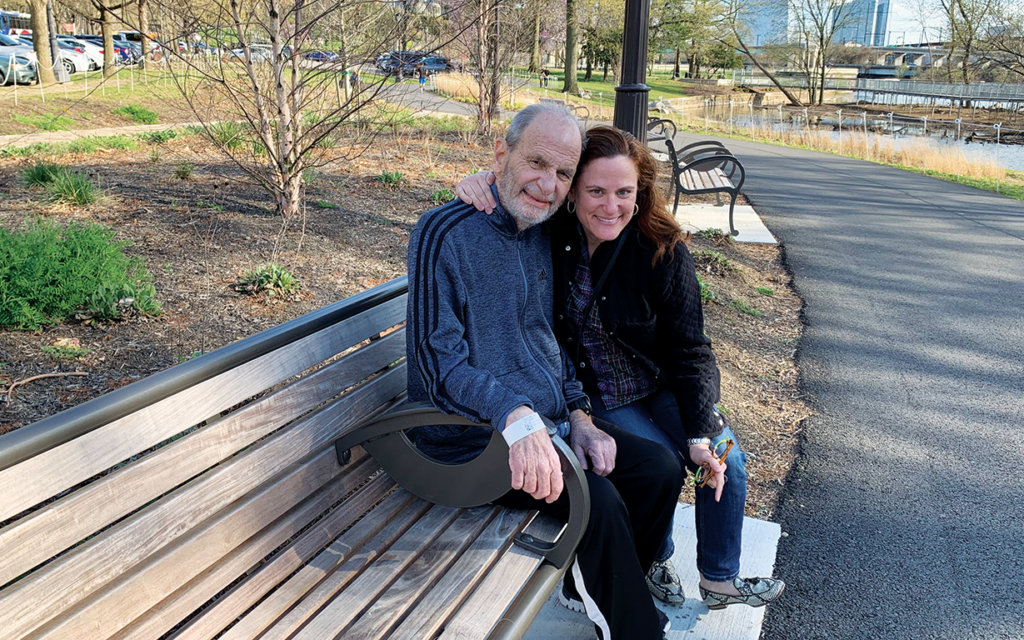 My father’s first yahrzeit is this Friday. It coincides with Chayei Sarah, a parsha that offers a unique chance to reflect on what makes up a good life.

Like Sarah, my father’s quiet devotion to family and community formed a memorable life, built of small acts repeated faithfully and without fanfare. As we navigate a world defined by newsworthy events and a constant striving for marketable achievements, I am moved by both Sarah and my father, Michael Fein, to focus on the unrecorded efforts that bind us together and enrich our lives.

My father grew up with very little and became a very generous, humble, and unassuming person. He was easily impressed with others, never with his own achievements and expertise, despite degrees from Penn and Rutgers and a long career as a patent attorney. Although an only child, he grew up with many cousins, including two his own age who each lost a parent and leaned on my grandparents for comfort and support. Perhaps his habits of putting himself out for others came from this experience, or perhaps it was just his good nature.

He was always ready, even eager, to help family, friends and even strangers. I could not begin to count the times he picked up the check, helped with a legal issue, gave a ride well out of his way, and so much more — and he did it all without fanfare or any expectations in return.

His devotion to family reflected his exceptionally giving nature. Growing up I surely took for granted how much he time he spent with us day to day, driving carpools, fixing meals, helping with homework, doing laundry, even deciphering my awful handwriting to type up papers before I learned how. He supported our interests in countless ways. I remember his outsized praise for the cards I made for birthdays, making me feel like I was far superior to any professional designer. He built bottle rockets with one brother, tracked down Beatles memorabilia for my sister, and spent many weekends taking my little brother to baseball card shows, among other passing fancies he supported as if they were of critical importance.

When I had my own children, it was utterly clear that he had a special connection with kids, built on his willingness to engage at their level in whatever task they loved (unless they used a pacifier, something he opposed with inexplicable passion). Countless times I would find him up early with my girls, taking them to the park or sitting patiently on a tiny chair, cramped into the child-sized playhouse in his yard, as they babbled on and “cooked” him breakfast.

He never missed a kid’s performance, grandparent’s day, or birthday party, and he took particular joy in pushing them towards milestones. No request was too much for him; he never held back if he could make someone happy. If the kids liked a certain movie, he would get coffee at six different McDonald’s to find every single happy meal toy in the promotional set. If a grandkid liked a sandwich at a particular place an hour away, they knew who to ask. When my daughters bought concert tickets in another city, he offered to drive them and wait in the parking lot until it was time to go home.

No wonder their adoration of their Saba was so unbounded.

Of the many gifts he gave his family, one of the most life-changing was the annual summer rental down the shore, which began when the first grandchild was a baby and continued until my brother built a home there nine years ago to continue the tradition. It may have been Mom’s idea and legwork, but no one enjoyed it more than my dad, or put more time into caring for the kids through many, many beach days. Whether it was getting down in the sand with them, taking them to jump waves, or buying them their fifth popsicle of the day, Saba was on the scene dawn til dusk, loving every minute.

My husband loves to tell of my dad’s palpable joy when we left Saba in charge of several kids for a few weeks one summer. When the other adults came for the weekend, Dad was practically clicking his heels for having had exclusive time with his beloved grandkids. His other summer passion was teaching them (and many others) to ride a bike. While not always fully honest (“Don’t worry, I won’t let go…”), he bribed liberally with jellybeans and rides to the arcade while patiently working with them, day after day. Even those most fearful of falling eventually learned, thanks to his persistence.

Perhaps his greatest gift to us was his unheard-of devotion to his in-laws, my grandparents. When my healthy grandfather, still practicing dentistry in his 70s, fell and suffered a spinal cord injury, my grandmother came to stay while he was in the hospital for several months. Little did anyone imagine that Mommom and Poppop would live with my parents for the next 11 years.

My parents are truly tzedekim — just as their children were growing up and the freedom of empty nest years approached, with the promise of travel and other indulgences, they choose to care for my grandparents personally, at home. This was not just a matter of sharing space, something many people find hard enough to do. As they aged, my grandparents developed a range of increasingly challenging health issues, requiring wheelchairs and impacting them both cognitively and physically. My dad often was on call in the middle of the night to help with the least pleasant nursing tasks, especially if an aide would cancel or couldn’t lift my grandfather alone. I never heard him complain, even about fatigue when he had to go to work the next day.

Both my parents turned their lives upside down to give Mommom and Poppop not only the medical care they needed, but also to enrich their lives as much as possible. The house was transformed with ramps and grab bars. The extra time and effort needed to get to concerts, graduations, or Shabbat services was spent in order to keep them a part of our daily life, and to give them the best possible life far beyond any expectations. Few people show such devotion to parents.

Dad was healthy, energetic, and working, until — and even after — he was diagnosed first with colorectal cancer, then with brain tumors, and finally with metastatic spread to his skin. It was a terrible ordeal, but he never lost his cheerful nature or his willingness to put in effort for others. Days before a major surgery, he insisted on driving to Boston to see a musical directed by one granddaughter; weeks after the difficult surgery, he again insisted on being there for another granddaughter singing in a concert in New York. No doubt he was feeling it as he bumped along in the car or sat in the pews, but his face was all smiles as he beamed with pride. No matter how sick he got, I never heard him complain.

The Shabbat before he passed was spent with our entire family. He started the day with Rummy Kub with the youngest, and spent hours on the porch watching them sing and do cartwheels in the yard. Too sick to really eat, he tasted enough to compliment the chefs. Old friends stopped over throughout the day, and he kept up his end of the conversation well, even cracking some jokes and remembering obscure facts we had forgotten. We were fooled into thinking we had more time.

While he did not get Sarah’s years or days, he lived up to her model life of making every day a gift. May his memory continue to be a blessing to all whose lives he touched with his love and kindness.

Laura Fein lives with her family in Teaneck. She is running for the Teaneck Board of Education. Reach her at lauraefein@gmail.com.