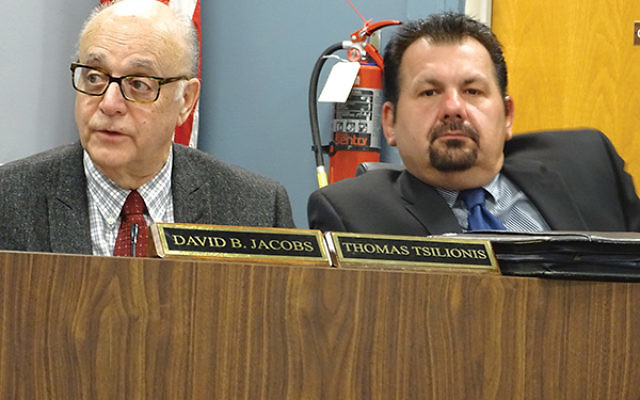 Roseland council members David Jacobs and Thomas Tsilionis sit side by side at a May 16 council meeting. Photos by Robert Wiener

Two Roseland Borough councilmen tendered their resignations in February after racially charged texts they exchanged last year became public. But when the furor died down, the politicians quietly rescinded their resignations. They remain in office and residents are demanding to know why.

The conflict began a year ago, when Thomas Tsilionis texted fellow councilman David Jacobs, its only Jewish member, in a chain that included four other members of the council, as well as Mayor John Duthie, all of whom are Republican.

Tsilionis, who is of Greek descent, began the conversation with a question: “David how I become Jewish? I want to be half Jewish (cheap) and half African American (endowed).”

Jacobs answered, apparently referring to a bris, “First the Rabbi needs to take a bigger cut,” to which Tsilionis replied, “I am legally changing my name to ShwartzNigga,” combining the Yiddish and English versions of a racial slur. Jacobs wrote “LOL” and teased Tsilionis over the size of his organ.

After the texts were made public in February, some 20 Jewish and non-Jewish residents of the town — offended by the racist and anti-Semitic nature of the exchange — formed a committee called Roseland United to recall Tsilionis from office after his four years of service on the council.

On Feb. 18, two days after The Progress, a weekly newspaper which covers western Essex County, printed its first story about the controversial texts, prominent New Jersey Republicans urged Tsilionis and Jacobs to resign.

One day after the news broke about their texts, Jacobs and Tsilionis capitulated, but nine days later each of them rescinded their resignations. According to Tsilionis, they both received “a lot of calls of support” urging them to stay in office.

Tsilionis blamed the release of the texts on a fellow council member, Richard Leonard, whom Tsilionis has said should be prosecuted for conflicts of interest related to his Roseland real estate office and his wife’s employment by the town government.

“At some point I will leave when I feel I have been vindicated and everybody understands this was a personal attack on me,” he told NJJN.

Not everyone agrees. Roseland United member Stacy Mintzer Herlihy, continues to press for Tsilionis’s resignation. “I’m Jewish and I live here,” she said.  “There is a lot of stuff on Facebook telling me to sit down, shut up, and go away. [But] it offended me as a human being, not just as a Jew.”

To Mintzer Herlihy, racial and ethnic slurs are not a laughing matter.

“I have explained to people the long, ugly history of calling Jews ‘cheap’ is not a joke, and that we are perceived as untrustworthy,” she said. “I have been told that I don’t know what I am talking about, that I am trailer trash, that I need to shut up and stop talking already. They won’t denounce the bigotry. I am a little frightened of these people.”

“I was disgusted that a council member would write those things to other council members and exercise such bad judgment,” said Claudia Reis, an activist in the recall movement. Reis is not Jewish. “It showed there was a cultural tolerance of bigotry and as long as there is that cultural tolerance, this type of behavior is allowed to go on.”

But Tsilionis insisted his comments were an isolated instance of bad judgment that does not reflect his real views. “These comments were serious. They were stupid. But the meaning behind them is not anything I believe in,” he said.

“I’ve done a lot of things for the Jewish community,” he told NJJN. “I am not anti-Semitic. It was a joke in bad taste that I heard and I am terribly sorry — not that I got caught, but that anybody had seen or heard something like that. The person I said it to is Jewish and he knows I don’t share those sentiments.”

“I am not racist,” he added. “I devote six hours on Christmas to feed the homeless in Newark.”

Jacobs declined to comment to NJJN about his role in the exchange of the texts. “It is time for Roseland to move on, and at this point in time it is old news already. Roseland has to get on and be healing,” he said.

Leonard admitted being one of several people who shared the texts with The Progress, but he denied any wrongdoing with regard to a conflict of interest. “I don’t think the charges are criminal,” he told NJJN. “It is just a question of what Councilman Tsilionis has raised. I am not under any criminal charges that I am aware of.”

Still, angry charges and countercharges continue to fly on Facebook and at council meetings.

Tempers flared at a May 2 meeting of the Roseland Borough Council, when Reis told Tsilionis, “We deserve leaders who don’t use the most racially-charged word in the English language and refer to people in a religious minority in egregiously outrageous terms when communicating with every single other elected leader of our community. That wasn’t a private text,” she said, to which Tsilionis responded, “Mrs. Reis, everything, about you is a sham.”

“Everything about me is a sham?” she snapped back. “I don’t go around calling people, ‘ShwartzNigga’ and saying you want to be ‘half Jewish (cheap),’ and then say you’re not anti-Semitic. You’re a sham.”